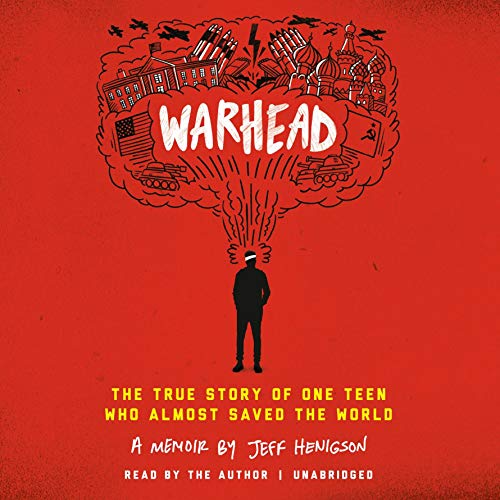 An often hilarious and always relevant memoir about one teen boy's battle with brain cancer and his Starlight Children's Foundation wish: to meet Mikhail Gorbachev in Russia and plead for nuclear disarmament and world peace.

It's 1986, and Jeff is an average 15-year-old: he thinks a lot about dating, he bounces around with his friends, and he's trying his hardest to get a car. Conversely, the world around him feels crazy: the United States and the Soviet Union are at glaring odds, with their leaders in a standoff, and that awful word, "nuclear", is on everyone's mind. Then, boom - Jeff learns that he has brain cancer and it's likely terminal. Well, that puts a damper on his summer plans and romantic prospects, doesn't it?

Jeff's family rallies around him, but they are fiercely complicated - especially Jeff's father, a man who can't say "I love you" even during the worst of Jeff's treatment. So when the Starlight Children's Foundation offers to grant Jeff a wish, he makes one certain to earn his father's respect: he asks to travel to Moscow and meet with Mikhail Gorbachev to discuss nuclear disarmament and ending the Cold War. Nothing like achieving world peace to impress a distant father, right? Jeff has always been one to aim high.

Jeff's story is dark, but it's also funny, romantic, and surprising. As his life swings from incredibly ordinary to absolutely incredible, he grapples with the big questions of mortality, war, love, hope, and miracles.

"A sweet but unsentimental account of a truly fascinating nuclear childhood. Henigson had me at 'Gorbachev.'" (Gary Shteyngart, New York Times best-selling author of Little Failure and Lake Success)

“An inspiring story of a teen fighting to save his life while also trying to save the world. Touching, vivid, full of humor and heart, Warhead shows what is possible when we refuse to accept a diagnosis of despair.” (David Ebershoff, best-selling author of The Danish Girl and The 19th Wife)

“Jeff Henigson’s incredible true story is both global and personal. Warhead is about the battle all teenagers face as they struggle to carve a place for themselves in a world they did not create - but one that desperately needs them.” (Maya Van Wagenen, author of Popular)

I thoroughly enjoyed this author-narrated memoir about Jeff Henigson’s journey as a teenager coping with brain cancer treatment as he also navigates high school and its challenges. The story of his “wish” to travel to the USSR in the late 80s to promote world peace - from concept to “execution” is thoroughly entertaining. His seemingly fruitless struggle to please his distant and demanding father is at times heartbreaking although the interactions are described so skillfully that I also felt sympathy for Jeff’s father, who seems incapable of expressing emotions he is certainly feeling. This is a beautifully told, inspiring story for all ages - and given the author’s strong voice (and exceptional talent imitating other voices)- I highly recommend the audio version.

This book is amazing in so many ways... I love everything about it: from the sad and painful moments to how the main character deals with all of the challenges life presented to him. So beautiful... so inspiring! Ah!!! Narration is one of the best! Impersonations are so vivid !