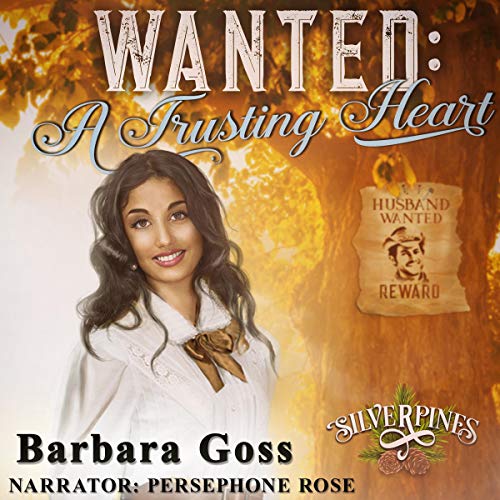 A series of disasters wipe out the men in the town of Silverpines, Oregon, leaving the women to take unconventional measures in order to save and grow their town.

A Chinook Indian by heritage, Dawn was orphaned and given to a white family as a slave. They raised her like one of their own, alongside their daughter, Laura.

Dawn soon finds herself falling for Jake, who recently moved to Silverpines, following his brother from Texas. Jake gets to know Dawn well and soon realizes he has fallen in love with her. The catch? Though society had come a long way, it still held prejudices against Native Americans and the whites who married them. Through prejudice and calamities, the two will have to fight for their love and trust in one another with all their hearts.

Are Dawn and Jake willing to take the risk for love? Can they face the prejudices together?

This is part of a series but is a stand-alone listen.

So sweet and heart warming!

Wanted: A Tusting Heart by Barbara Goss is so sweet and heart warming. The story was about two lovers who fought for their love all the way through obstacles but never gave up and hold on to their love. The trust they have for each other was so strong they managed to go through everything. This story is light and sweet. This is definitely a nice read for a feel good romance!

I got this story via audiobook boom and this is my voluntary review. this is another good , clean western romance. it again explores the prejudice in our society without being preachy. the twists and turns the main characters take to the alter were well developed and took me on an excellent ride. loved the journey. narrator was very good with all of the voices.

From Servant to Wife

Dawn came to Silverpines as an orphaned Indian child given a white family as a slave. But never held in bondage, Dawn was raised as a daughter. When the ranch fell on hard times, Dawn kept working hard to pull her weight.

Jake came to Silverpines to work the livery. As soon as he met Dawn, his heart found his future. But when the local Chinook tribesmen take Dawn far away, Jake has to find her.

This is a wonderful telling of the writings of Ms. Goss. You won't be disappointed in this story!

Dawn and Jake are two special people who were meant to meet, meant to fall in love and meant to live happily ever after.
This story is a perfect example of how trust and belief can change things for the better.
It also shows that when you have a brilliantly talented pair of artistes working together, as we have in Barbara Goss and Persephone Rose, then one gets a beautiful, interesting and very entertaining story.
I loved this story from beginning to the end, as well as the characters who seem to fumble their way through life (like so many of us do - even if we can't admit to it), the selfishness of some of the characters and the friendship and love shown by others.
All in all this audiobook was a delight to listen to and I happily recommend it.
I listened to the audiobook version and my review above is unbiased and given voluntarily.

Dawn knows little about her heritage other than that as an orphaned Chinook child she was given to a white family as a house slave. Treated by the family as a sister to Laura she is nonetheless aware of the casual discrimination practiced by most, both white and Indian. She resolves three things: to discover more about her family; to put aside her feelings for Laura's brother-in-law; and to find and marry an Indian. Countering this meaty core is an almost Gothic series of events that keeps the action going at a furious pace. As read by narrator Persephone Rose, the story comes to life and one willingly suspends disbelief (although I admit to, more than once, wanting to shake some sense into someone or another--you know, like yelling "Don't go in the house!" to the movie screen) to reach a satisfying ending.

A story of love and acceptance...

Dawn has grown up with a “white” family, but she has never forgotten her Chinook heritage. Unfortunately many people do not accept mixed race relationships. Will it every be possible for her to find love and have a family of her own?

Jake has strong feelings for Dawn, but does she feel the same? Can he convince her that it doesn’t matter what anyone else thinks... the only thing that matters is how they feel?

Barbara Goss is a master storyteller of clean historical romances. Her messages of love and acceptance are always very touching.

This performance by Persephone Rose is very well done. A very enjoyable listen!

The Silverpines series is so wonderfully written, and Dawn's story really is one that translates through time. Dawn is a Chinook who lost her parents, and was given to a white family as a slave. She was not treated as a slave, but as a member of the family. When Jake shows an interest in her though, she feels that her heritage would not be accepted as a mixed marriage. Luckily, Jake thinks differently. This story is short, but full of well developed story lines! Mercy, a beautiful woman looking for a husband, sets her sights on Jake. Her actions greatly affect the outcome of Jake and Dawn, and not in the way Mercy expects. The Chinook connection that Dawn makes also shows the traditions and values the tribes have. It's eye opening to see how they view mixed marriage and what they will do to keep their woman. It's action packed, full of suspense and a wonderful ending.

Narrated by Persephone Rose, the story flows with smooth, melodic voices. Rose does an amazing job with the different voices and accents with the characters. I look forward to additional narrations

Dawn is half Chinook Indian and half French. She was given to Laura’s family as a slave when she was left orphaned. However, Laura’s family treated Dawn as their own and the girls grew up as sisters. Now 27yo, Dawn wants to settle down and have a family. She is in love with Jake, Laura’s brother-in-law, but she is afraid that Jake will lose business if he marries an Indian...so she rebuffs Jake when he asks to court her. Jake can’t believe that Dawn refused him and vents his frustrations to his brother, only to be told the real reason. Now Jake is ready to show Dawn that he can handle whatever is thrown at him. However, every romance needs some drama so in comes Mercy, who has her eyes set on Jake. Will Mercy’s machinations win Jake over? Will Dawn really walk away from the man she loves? When Dawn finds herself in a strange city, she relies on her faith and the aid of a pastor to help...is returning to SilverPines and Jake what God has in store for Dawn or is He sending her somewhere else?
Ahhhhh, there’s so much going on in this book that you won’t be able to stop reading/listening!!! There’s a scheming woman, an enamored Chinook Indian and two very determined lovebirds...just what you expect in a western romance! Great story and narration.
I voluntarily accepted a complimentary copy of this book in exchange for an honest review.

A wonderful tale of love, danger and perseverance. This story embodies the faith and trust in God and the person you love to come to the rescue. I received a complimentary audio and this review is voluntary.

Loved this book. It totally brought out the romantic in me.

Loved it that Barbara Goss included some enlightening facts about the Indian culture, particularly the Chinook tribe's lifestyle and heritage.

The narration was good and entertaining, though I found it a bit lacking in providing justice to the voices of the female characters.

I was provided this book in exchange for an honest review.