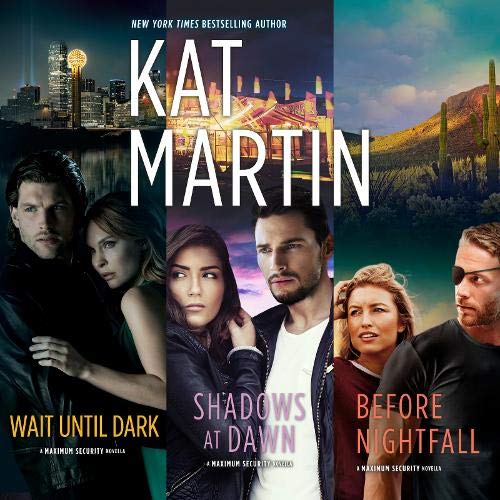 Wait Until Dark & Shadows at Dawn & Before Nightfall

Private investigator Jonah Wolfe knows trouble when he sees it. So when April Vale storms into his office at Maximum Security, all his warning signs flash red. April’s been accused of murder, except she has no memory of how she woke up in her coworker’s bed - drenched in his blood, as he was shot with her gun. As the campaign manager for the mayor, April’s job and life are on the line if she doesn’t figure out who’s trying to frame her. But the clock is ticking, and the pair must find the murderer…before April winds up dead.

"Kat Martin is a fast gun when it comes to storytelling, and I love her books." (Number one New York Times best-selling author Linda Lael Miller)

Private detective Jaxon Ryker swore to himself he would keep his hands off Mindy Stewart. No matter how much Jax might secretly wish otherwise, his colleague at The Max is strictly off-limits. But when Mindy is the victim of an attempted kidnapping, everything changes. With both of them thrust into danger, Jax swears to protect her. As they work together in search of answers, it becomes clear Mindy’s life is on the line, so a trap is set - with Mindy as bait. Jax and Mindy have to put aside their overwhelming attraction, but if they live through this, all bets are off....

Kat Martin is back with another thrilling Maximum Security novella filled with danger, suspense and one smoldering road trip to the mountains of Mexico!

When her best friend’s son is kidnapped, private detective Lissa Blayne drops everything to focus on the missing boy. Julie and Lissa have been close for years, so when Julie’s friend Colt Wheeler joins the investigation, Lissa bristles at the former ranger’s take-charge attitude. Lissa doesn’t need a man calling the shots, even if there is something about Colt’s protective side that has her tough exterior melting away. As Lissa and Colt take their search on the road, the tension between them slowly morphs into trust and understanding - and they’ll need both in order to outsmart the dangerous abductor they’re tracking. The only thing hotter than their attraction is the heat of the Mexican sun, but this road trip is no vacation....

I really like Kat Martin's books. They're full of suspense , fast pass some sex. Her heroines have brains too. 😃 I bought this audiobook knowing it had 3 short stories in it. I just wish all 3 stories were longer. The narrator, James Anderson Foster did a great job. Enjoy !😄