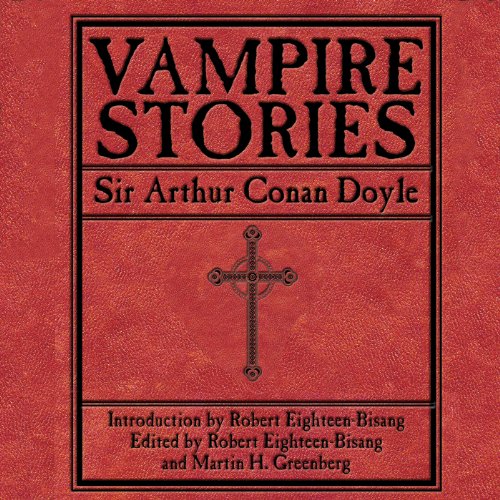 Although many of the stories in this collection of Sir Arthur Conan Doyle's vampire tales are steeped in horror and foreboding, narrator Stephen Menasche does not produce a heavy-handed performance. Instead, he draws listeners close with his ability to create the personalities and feelings of the characters - from the Captain's growing paranoia and psychosis in "The Captain of the Pole Star" to the menace under the sweetness of Miss Northcott in "John Barrington Cowles".

Although classic vampires make an appearance in some of the stories, this anthology goes beyond typical monster tales and explores the theme of vampirism itself.

Who would suspect that the same mind that created the most famous literary detective of all time also took on the eternally popular genre of vampires? Sir Arthur Conan Doyle, a contemporary of Bram Stoker, gave us some fascinating works of vampire fiction. From the bloodsucking plant in "The American's Tale" to the bloodsucking wife in "The Adventure of the Sussex Vampire," he reveled in the horror created by creatures who survived on the blood of men and women.

As the best-selling Twilight series has dominated bookstores, it's the perfect time to offer the first-ever compilation of Sir Arthur Conan Doyle's vampire tales. Get ready to sink your teeth into this heart-stopping anthology. Each of these 12 short stories has been pulled from obscurity and hand selected for this collection. Conan Doyle's famous friendship with vampire king Bram Stoker is thought to have influenced these many blood-sucking tales, including "The Captain of the Pole Star," about a medical student on an arctic voyage haunted by a heat-draining Eskimo vampire and "The Three Gables," in which vampirism is cunningly used as a metaphor for capitalism.Featuring an introduction by world-renowned vampire expert, Robert Eighteen-Bisang, this is a must-have anthology for all vampire lovers, and for any Arthur Conan Doyle enthusiast.

Not What One Would Hope

Ooooo my god. It was wonderful to discover some of Doyle's non-sherlock fiction, after hearing about it for so long. I'm sure much of it can hold the reader's attention and maybe even go further than that but NOT if youv'e got this particular audio version. IT WAS TERRIBLE.

The narrator seems convinced he is reading P.G. Wodehouse rather than Doyle's thrillers and it is off putting in such a bizarre and obnoxious way that turns suspense into drudgery. His accents are laughable and he mispronounces all kinds of things that you wouldn't think it possible to get wrong. It was just...so confusing.

That being said, most of Doyle's writing is no less enjoyable than any classic Sherlock tale. I'd love to sit down and read them IRL rather than by audio and get a better feel for them. I have to note however, be prepared for much more racial/ethnic/social discrimination from Doyle than you might find in the more well-known writings. It goes from descriptions that almost fly under the radar about class and wealth to downright disgusting systemic categorizations about blacks and other racial minorities of the period. The "Gables" story towards the end starts out especially gross and that's when I just had to put it down.

This was a huge disappointment:

The narrator’s attempts at accents were ludicrous and even annoying;
the foreword was missing; and
the term “vampire” in the title was misleading (seriously, y’all, The Ring of Thoth” is a mummy story).

Worst—not all the stories were written by Doyle!

I LOVE Doyle, but this narration was Terrible. Horrible accents, mispronounced words and overall poor understanding of what he was reading.

Audible gets some really bad readers, but this guy is one of the worst. His reading is wooden, rather like a middle school student. His pronunciations are embarrassingly inept. His accents are really very, very bad.
Stories are OK, but about half of them are Sherlock Holmes stories from Conan Doyle's least successful writing. There is also a dreadful Holmes cover story which would have been better left in his word processor and not inflicted on a suffering public.