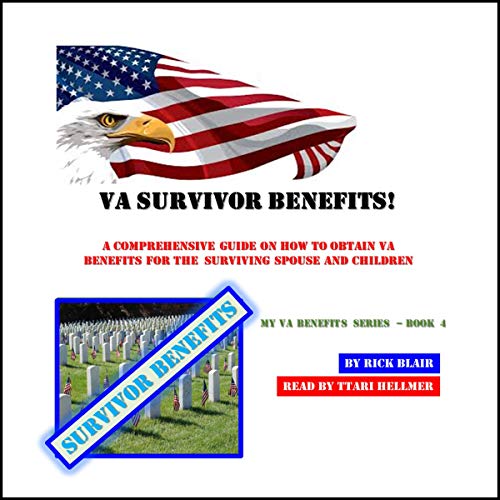 During his second inaugural address in 1865, Abraham Lincoln asserted that the United States assumed a responsibility “To care for him who shall have borne the battle and for his widow, and his orphan.” Much has changed within the VA regarding healthcare and disability benefits for our Veterans and their families over the years, but the core believe that Lincoln espoused at the end of the civil war still holds true today.

Information is plentiful regarding the Veterans’ benefits, but it has been my experience that comprehensive information regarding surviving spouse and dependent’s benefits is disappointingly sparse. As such, I’ve written this audiobook in the hopes that it helps the Veteran’s surviving family members obtain the VA benefits they have earned through the Veteran’s military service and ultimate sacrifice.

I served nearly 27 years in the US Air Force and then another 10 years in my “second career” as a Veterans Service Officer (VSO). Now for my third and hopefully final “career”, I plan on taking it easy and writing books to continue my advocacy for Veterans, for the knowledge I gained during those 10 years as a VSO, I believe, is far too important not to continuing sharing with other disabled Veterans.

As a VSO, I spent four years advocating for Veterans benefits at the St Petersburg VA Regional Office, another four and a half years working with patients at the James H. Haley VA Medical Center in Tampa, and then the last year and a half providing community-based advocacy for our Veterans in and around Sumter County Florida. I now volunteer at an American Legion Post in Pensacola, Florida.

As a result of this experience, I not only became familiar with VA law and the VA disability claims and appeals processes, I learned the procedural matrixes the decision makers (Raters, Decision Review Officers, and Judges) utilize to adjudicated disability claims. As a result of that experience, I discovered that by approaching the benefits process from the perspective of what could be granted, instead of focusing on what would be denied, I could help Veterans and their families become VICTORS instead of victims.