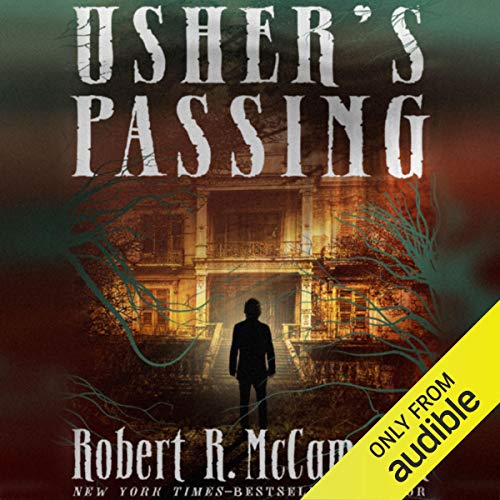 Poe's classic tale lives on in this Gothic novel of ancestral madness in the mountains of modern-day North Carolina, from a New York Times best-selling author.

Ever since Edgar Allan Poe looted a family's ignoble secret history for his classic story "The Fall of the House of Usher", living in the shadow of that sick dynasty has been an inescapable scourge for generations of Usher descendants. But not for horror novelist Rix Usher. Years ago he fled the isolated family estate of Usherland in the menacing North Carolina hills to pursue his writing career. He promised never to return. But his father's impending death has brought Rix back home to assume the role of Usher patriarch - and face his worst fears.

His arrival forces him to confront a devious and impassive family and his vulnerable sister's slow descent into insanity. Stirring memories of the grim folktales born out of the surrounding Briartop Mountains and the terrifying legends of missing children, Rix knows that in the dark, twisted corridors of Usherland, that dreadful something he saw as a young boy is still there. It's waiting for him, as decayed and undying as the Usher heritage and more depraved than anything Poe could have imagined.

This eerie novel by the Bram Stoker Award-winning author of Swan Song and Boy's Life is "a frightening pleasure" and a worthy tribute to the master who inspired it (St. Louis Post-Dispatch).

It’s easy to forget that Edgar Allan Poe’s classic “The Fall of the House of Usher” was a compact short story, just over 7000 words. This 17-hour novel is not so much a retelling as a sequel, set generations later and moved from somewhere around Boston to North Carolina. Have no fear: the family is as weird as ever. And the house itself—The Lodge—is a massive, ominous place, a living thing that is clearly evil with its powerful smell of rot and decay. It’s the stench of death. Other than a historical appearance by Poe himself in the early going (and a fissure down the side of The Lodge, and the patriarch’s hypersensitivity to light and sound), this bears little resemblance to the original. It is all new and imaginative, featuring the likes of the Pumpkin Man, the Mountain King, and a hideous black panther known by the locals as Greedy Guts. But there are worse things. Far worse. Mystery piles upon mystery, spreading to the Usher family, its lineage, and the hillbillies who populate the surrounding mountains—and whose superstitions are revealed to be based on something more than folklore. Children disappear. There are monsters, and monstrous people. Characters are like shape-shifters who are never what they appear to be for long. The story steadily gains momentum from a deceptively slow-ish start, moving from the merely peculiar to the abjectly supernatural and terrifying. McCammon employs a neat trick, used sparingly, where present-day events give way to vivid flashbacks, outside the observations and dialogue of contemporary characters. You barely realize it’s happening, but it serves to reinforce the history of this bizarre family and its impact on their present tribulations. Scott Aiello delivers an energetic reading, handling many voices with alacrity. He has a habit of dropping odd pauses in mid-sentence, but makes up for it with a lively rendering of a tale that Poe would approve.

I thoroughly enjoy Robert McCammon’s novels, and Usher’s Passing does not disappoint. However, I found the narration to be grating and not very polished. Look past this for another twisting tale from McCammon.

Usher's Passing is one of my all-time favorites. McCammon knocked it out of the park here. It's a dark, brooding, rich story full of interesting characters and locations. The lodge seems like a character in and of itself, and I suppose it is. As did Usherland in its entirety. This book is a terrifying sort of sequel to Edgar Allan Poe's The Fall of the House of Usher. I've returned to it several times over the years, so when I saw the audiobook pop up as a recommendation, I had to get it. Definitely don't regret the purchase. Now, the narrator, Scott Aiello. I'm not sure how long he's been a voice actor and he obviously has serious talent, but some of the stuff he did was grating and detracted from what would have been a brilliant performance. There are several instances in which he screams into the microphone to the point that the audio is distorted. Also, why on earth would Walen Usher be screaming *that* loudly if the mere humming of electricity drives him nuts? Really, there is nothing more irritating than a screaming voice actor. No one wants to hear it - especially if they're listening in bed or on the morning commute. The characters were all pretty damn good, save Roderick. He was lacking presence and came across as clipped rather than powerful and laconic. My last issue is the way he says "and." WHY? It's clipped with awkward pauses, pronounced as "und," and every character says it the same way. Drove me up the wall once I noticed it. This isn't mean to be disrespectful to Scott as I think he has a ton of talent. It's just that the bad was really bad and extremely grating.

McCammon is a master storyteller

Since I just read Poe’s “The Fall of the House of Usher”, I thought I would jump right into this one and am glad that I did. McCammon takes Poe’s short story and turns it on it’s head with his own imaginings of the Usher family. Tidy Cat’s litter box of terror, eating brothers Puddin pie, soothing sounds of a satanic symphony, 50 caliber fireworks, mind control magic freaks, and canned peaches with ginger ale. Oh…and a Pumpkin Man lurking in the woods waiting to snatch up wayward children and secret government weapons of mass destruction. Yep. It’s all in there. To say there was a lot going on in this one would be an understatement. I’m not quite sure how McCammon managed to keep it all going without it being a total train wreck, but he did. I thoroughly enjoyed all of the chaos too.

I couldn't stop listening to this book. I was a little concerned that some of the previous reviews had said the story was hard to follow with the changes in time periods and people, but I found that they flowed really well - if you're paying attention at the particular time it changes. I loved the narrator's cadence. Some of the audio was a little clipped, but his voices were good and I especially liked his old man mountain voice!

Great book!! Loved it every step of the way.. This book is a never turn it off type of book. Thanks Robert

While I appreciate depth in a storyline, this story was overcomplicated with far too many characters. The germ of McCammon's natural writing talents, however, is evident and kept me interested., though the novel has two endings.

Make this a mini series!

The story begs to be visualized. I enjoyed it very much and appreciated that although it had suspense, darkness and aspects of would be a parents worst nightmare, it didn’t dwell on sadness and kept to it’s haunted feel instead.

I love McCammon, but this was painful

I don't know which was the most torturous, the story line or the narrator! I am a huge fan of McCammon but it's hard to believe he even wrote this. This story just drags on and on making no sense until the final four chapters. I only gave it one star, because there were no negative numbers! The worst narrator I've ever heard! The narrator speaks as if he were telling a story to a bunch of preschoolers! this one is not worth the credit skip it !