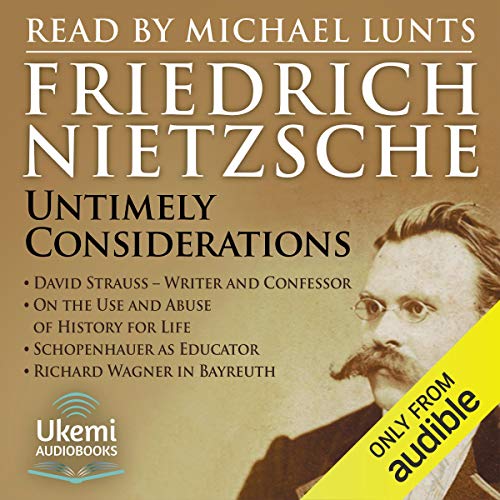 Untimely Considerations contain four essays: 'David Strauss - Writer and Confessor'; 'On the Use and Abuse of History for Life'; 'Schopenhauer as Educator'; and 'Richard Wagner at Bayreuth'.

The essays date from the early part of Nietzsche’s life when his Romantic view on life and art was coloured by the powerful writings and personalities of such figures as Schopenhauer and Wagner - as the titles of two of the essays proclaim. Published between 1873 and 1876, they were presented under the umbrella title 'Unzeitgemässe Betrachtungen', which has been variously translated as 'Thoughts Out Of Season', 'Untimely Meditations', 'Unfashionable Observations' - and 'Untimely Considerations'.

They reflect his early interest particularly in culture, philosophy, and the interplay between art, science and life - topics which he would revisit over the following years. In ‘David Strauss: the Confessor and Writer’, he labels Strauss - a prominent Protestant theologian of the time - as a Philistine, in humorous but derogatory style.

In ‘On the Use and Abuse of History for Life’ Nietzsche sets out to re-examine the role of history in informing contemporary life, and, controversially promotes the importance of individual ‘great men’ rather than the ‘masses’. This theme is continued, in a way, in the third essay, ‘Schopenhauer as Educator’, where he lauds those individual and honest qualities of his philosophic mentor. However, Nietzsche faced more difficulty with the final essay - where he considers both the work and the personality of Wagner - because his own attitudes towards the challenging composer were changing. These four works together present a fascinating portrait of the younger Nietzsche emerging into the highly charged and figure he was to become.

Translations: David Strauss and Richard Wagner - Anthony M Ludovici ; On the Use and Abuse of History for Life - Ian Johnston; Schopenhauer as Educator by Adrian Collins.

Philosophy at it highest interpretation subjectively through the soul of the composer.
Delving within the inner sanctum of one of the most revered philosophers and geniuses of our era.

Recommend to those who dare to stare into the mirror of subconscious streams of thought throughout past-present-future.

What a treat to be able to listen to Nietzsche's Untimely Meditations! Strange that the essays were out of order, though, w Schopenhauer as Educator and History for Life switched.