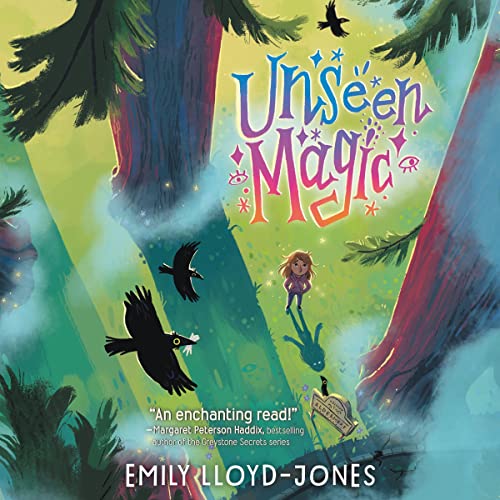 The trick to all magic is: You can only see it if you know where to look.

The magic-infused town of Aldermere is the first place 11-year-old Fin has ever felt safe - and she’ll do whatever it takes to save her home when she accidentally unleashes a shadow self who wreaks havoc everywhere she goes. Emily Lloyd-Jones’s middle grade debut is an enchanting exploration of self-discovery and finding the place you truly belong. Unseen Magic is for fans of A Wish in the Dark and A Tangle of Knots.

Aldermere is a town with its own set of rules: There’s a tea shop that vanishes if you try to force your way in, crows that must be fed or they’ll go through your trash, and a bridge that has a toll that no one knows the cost of. Some say that there may even be bigfoots wandering through the woods.

For Fin, Aldermere is her new home. But she’s worried that she’ll do something to mess it up - that she was the reason she and her mother have constantly moved from place to place for so long. When an upcoming presentation at her school’s science fair gives her increasing anxiety, Fin turns to magic to ease her fears. The cost is a memory, but there are things from her past Fin doesn’t mind forgetting. This will be the last time she relies on magic anyway, she's sure.

Except things don’t go exactly as planned. And instead of easing her anxiety, Fin accidentally unleashes an evil doppelganger. Suddenly Aldermere is overrun with unusual occurrences - and Fin is the only one who knows why. She will have to face her fears - literally - to stop it.

Emily Lloyd-Jones crafts an atmospheric novel full of magic and mischief while exploring what it means to stand up to your fears and accept yourself. Unseen Magic will captivate listeners of Anna Meriano’s Love, Sugar, Magic series and Natalie Lloyd’s A Snicker of Magic.