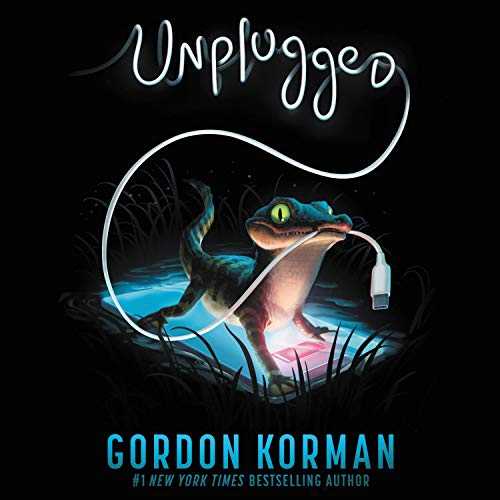 From the New York Times best-selling author of The Unteachables, Gordon Korman, comes a hilarious middle grade novel about a group of kids forced to “unplug” at a wellness camp - where they instead find intrigue, adventure, and a whole lot of chaos. Perfect for fans of Korman’s Ungifted and the Masterminds series, as well as Carl Hiaasen’s eco mysteries.

As the son of the world’s most famous tech billionaire, spoiled Jett Baranov has always gotten what he wanted. So when his father’s private jet drops him in the middle of the Arkansas wilderness, at a place called the Oasis, Jett can’t believe it. He’s forced to hand over his cell phone, eat grainy veggie patties, and participate in wholesome activities with the other kids, who he has absolutely no interest in hanging out with.

As the weeks go on, Jett starts to get used to the unplugged life and even bonds with the other kids over their discovery of a baby-lizard-turned-pet, Needles. But he can’t help noticing that the adults at the Oasis are acting really strange.

Jett is determined to get to the bottom of things, but can he convince everybody that he is no longer just a spoiled brat who is making trouble?

Mr.Korman has mastered his craft of providing clean and entertaining stories. His style of switching characters between chapters for a different point of view is spot on. Unplugged was great and I can see more books in the future from this vastly different set of four characters.

good book wish there was a second book

loved it. first audiobook with family/kids. unplugged was the best and great voice actors. kids are excited to read again.

i enjoyed the storytelling and liked the premise. Preteens would like this book and the last sentence is worth the read!

Pretty good, but not my fave Gordon Korman book

Agree with others, not his best work. Loved Twinkie Squad, No More Dead Dogs, Ungifted, Schooled.... This and Masterminds seem a bit far fetched, but they are full of action.