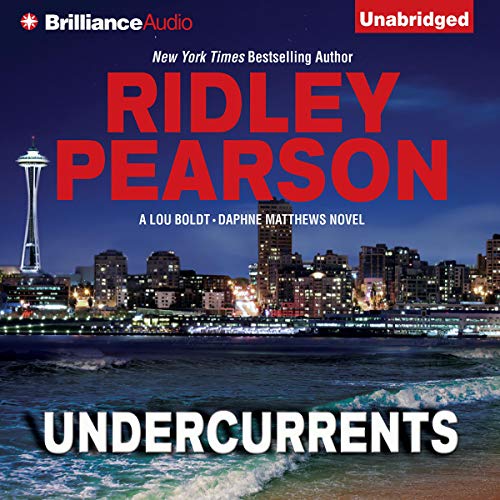 Police Sergeant Lou Boldt heads a special task force within Seattle’s Homicide bureau. His job: find and stop the Cross Killer, a twisted, perverse serial murderer who has eluded police for six months and paralyzed the city. But when a body washes up on the shore of Puget Sound, Boldt thinks the killer has finally made a mistake.

This body shows some of the work of the Cross Killer - but a job badly botched. Did this woman die while trying to escape? Did she knowingly jump in the water to preserve a clue? And is she now desperately trying to tell Boldt something? With the help of the alluring Daphne Matthews, a police psychologist, Boldt pieces together the complex puzzle - and the listener is taken along on a journey into the mind of a killer, and into the day-by-day nuts and bolts of police work, that is among the best in modern crime fiction. Undercurrents is a roller-coaster ride in the dark that will intrigue, startle, and satisfy.

Too soap opera-ish for me. And, please, the only character who hadn't a high pitched, nasal, annoying voice was the protagonist. Didn't like it.

Would you try another book from Ridley Pearson and/or Jeff Cummings?

Cliched writing, unsympathetic character, uninspired plot. Some of the writing made me wince. This book got good reviews but there are so many more & better mysteries out there. I was hoping to find another series that I would enjoy, but I only listened to the whole book because I paid for it.

Would you ever listen to anything by Ridley Pearson again?

Who would you have cast as narrator instead of Jeff Cummings?

He was fine as the main character but when he gave voice to some of the others his voice was high pitched and grating.

The outdated criminology methodology made me wince.

What was most disappointing about Ridley Pearson???s story?

I'm sure it was captivating when first published.

You didn???t love this book... but did it have any redeeming qualities?

I liked the local.

I wish audible would publish the original date as opposed to the audible date of issue.

Stilted, monotonous reading squelches any prospect of appreciating the mediocre story. Won't be trying more from author or reader.

Couldn't Put It Down

Listened to last half almost straight through. Loved the Bolt/Daphne team. The performer did a great job with the various characters.

Greater than the sum of its parts.

This book's filled with cliches. Cop protagonist who's taken his share of life blows, fellow officers who are more interested in office politics than police work, etc. The only non-cliche is Boldt not being a drinker (or a smoker). The writing style's groan-inducing at times. Plus, the narrator reads almost every male's dialogue as though that person's effeminate. No where do I get the sense the author intended that to be so. Having said all this, the lead character grew on me and even though the mystery stretched credulity, I had to find out what it was as soon as I could.

What would have made Undercurrents better?

Could have been half as long
Imaginative story-great setting-Seattle a great city
I wish to see battle of wits between good guys, bad guys-don't care if good guy has issues with x wife/ maybe new wife- also no cop hero drinks milk in a bar
how about a cop hero with some b**ls
also too liberal- serial killers are bad guys-period
How about some fast karma-do something smart, gets rewarded, do something dumb, you pay for it

What was most disappointing about Ridley Pearson’s story?

Formerly a good mystery, cop writer. Suspect he's hiring co-eds to write for him. Don't write a romance novel and sell it as a cop book.
Really sad-was a big Ridley fan-suggest he use a pseudonym and write chic books w/ bare chested, longhaired dudes on the cover, and write real mystery/cop books as Ridley.
He's a really good contemporary author, but really...milk in a bar, wife who is dominant?
Hope he's getting good sex from whomever is influencing him.
Love audible-you guys are great

He was great
Over the top

What character would you cut from Undercurrents?

Could have been a home run
Too long, too predictable, too beside the point
Excellent regional intrigue