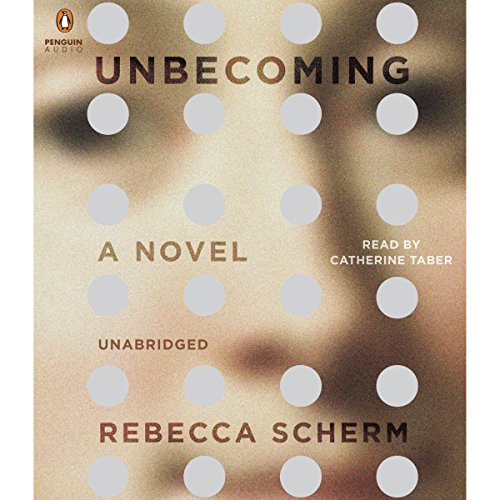 A major new debut thriller about a small-town girl who charms her way into the world of international art fraud.

On the grubby outskirts of Paris, Grace restores bric-a-brac, mends teapots, re-sets gems. She calls herself Julie, says she's from California, and slips back to a rented room at night. Regularly, furtively, she checks the hometown paper on the Internet. Home is Garland, Tennessee, and there, two young men have just been paroled. One, she married; the other, she's in love with. Both were jailed for a crime that Grace herself planned in exacting detail. The heist went bad - but not before she was on a plane to Prague with a stolen canvas rolled in her bag. And so, in Paris, begins a cat-and-mouse waiting game as Grace's web of deception and lies unravels - and she becomes another young woman entirely.

Unbecoming is an intricately plotted and psychologically nuanced heist novel that turns on suspense and slippery identity. With echoes of Alfred Hitchcock and Patricia Highsmith, Rebecca Scherm's mesmerizing debut is sure to entrance fans of Gillian Flynn, Marisha Pessl, and Donna Tartt.

The most interesting thing about this book is the publisher's summary. The book itself is incredibly tedious. At the start of the novel, the totally unlikeable heroine is indeed panicked (as the publisher has told you) when she realizes that her boyfriend and friends are about to be released from prison. You realize that she did something bad and left them behind to pay the consequences. OK, so far the story shows promise. Except then...it doesn't go anywhere. You see endless flashbacks to the girl's childhood which are kind of predictable. She has it tough (although not that tough, really--there's a five minute bit where the author tells you how the girls parents were not married when she was born so she drifted from this home to that home to that home until her parents got back together again and moved to the town where the story takes place...that feels like it was added after the fact because the author realized that the girl's current home life was not bad enough to account for the girl's feeling of self pity!). She meets the town's loved child. She meets his friends. They drift aimlessly (the kids' stupid behavior is hard to believe....well, it is actually IMPOSSIBLE to believe, as is the entire novel). Then bad thing happens and guys go to prison while girl goes to Europe and ends up repairing antiques (the descriptions of some of these antiques are annoyingly long...and lack any kind of beauty; sounding almost like excerpts from wikipedia). Then the kids get out of prison...and more preposterous plot 'meanderings' ensue(not surprising enough to be called 'twists'), some are actually groan-worthy...Anyway, read at your own peril. Or if you need something to help you fall asleep.

Staying a step ahead of her lies

This story begins in Paris with her first lie... "Bonjour, je m'appelle Julie." She is really Grace from Tennessee, hiding out in France. Tomorrow her secret husband, and former lover will be released after 8 yrs. in prison for a crime she masterminded. Casually she tells the reader, "the best lies were the simplest...and made the most sense...these lies are the easiest to swallow." With the ease of a chameleon switching colors Grace tells the reader how she came to be Julie in Paris. The story is told in flashbacks for the first portion, then switches to real-time. Until that switch, the story is jittery and suffused with tension; Julie expecting any minute to be found.

From a dysfunctional wrong-side-of-the-tracks family, Grace has always felt insignificant and ashamed. Growing into a pretty young girl, she catches the affections of local golden boy Riley Graham. From an esteemed and wealthy family Riley has everything Grace has ever dreamed of, a wealthy aristocratic family, respectable parents and a doting mother that has always wanted a daughter. Grace twists and turns herself to meet their expectation, molding herself into that longed-for daughter, and Riley's perfect girlfriend. Always on her mind is caution to keep up the pretense...to become the person she is pretending to be, staying one step ahead of the lies. As we hear her tell it, it all seems a harmless act of survival by a desperate little girl longing for love. Grace's longings go much further than just love though, and as she moves through the years her personality becomes defined, Scherm deftly creating a little sociopath before the reader's eyes, that dismisses the trail of destruction she leaves behind.

The back and forth narrative style keeps the plot going at a steady, but sometimes bumpy pace. The flashbacks didn't always transition smoothly into a segment, but it wasn't distracting either. While not nearly Highsmith or Hitchcock, Scherm gave me the sense and promise of her own definite style. Her development of Grace/Julie was most nuanced while she is away from Riley, but it was also interesting to see how she manipulated around the Grahams. Most enjoyable to me was while Julie worked for the disreputable Jacqueline restoring antique jewels, and then finally, where we see what the author can really do when she releases Julie from her years of self-doubt -- when she finally *becomes.*

New author Rebecca Sherm is one of the new crop of debut novelists that have found themselves one of the *critic's darlings* having their debut novel released with an attached pedigreed before it even hit the shelves. It's commonplace lately to see every psychological thriller with a psycho femme fatale branded the next Gone Girl, every art heist story inspired by Tartt's The Goldfinch, and any suspenseful crime novel the offspring of Hitchcock or Highsmith. With these astral claims, marketers are lining these fledgling writers at the gate with the seasoned thoroughbreds --not always a favor. My opinion is that Unbecoming was a very good debut novel, and I hope that Scherm will feel encouraged to continue writing. She definitely has both creative and writing talent and a distinctive style that I'll be looking forward to reading in the future.
.

Well-written: the author unspooled the story at just the right pace. The protagonist is complex and unlikable-yet I couldn't wait to see what came next.

I like this author. The first 2/3 of the book chased some ideas that never got fleshed out but were interesting.
A more experienced editor might have steered the direction of the story more concisely. Despite this the book was an interesting read.

So much more than expected

The characters have Depth, the romance is tangled and painful, the story has small town Tennessee and big city NYC and Paris.. It was absolutely worth my credit, and more.

A story featuring unforgettable characters. Great plot, pace, and if you like fine arts then you'll love this book.

Not a fast story, but a good one

There was a lot of depth to the characters of the story. The actual events could have been told in about 4 hours. I enjoyed 'getting inside' the mind and heart of this main character though, and I like long books.

Narrator with a lisp

The female narrator for this story did voices and accents quite well, but the sound of her lisp detracts from the experience. I'd recommend you buy the book, as opposed to listen to it.

This book could have been half as long and it still would have been too long. The story dragged on and on. And on. The characters were boring and the ending was boring. There were too many plot lines, any one of which could have been developed into a decent story, but the author couldn't stick to one. Really wish I hadn't wasted my time.

Easy read, intriguing story. Twists that were surprising yet not surprising. Thoughtful insights into the mind of a dishonest person.