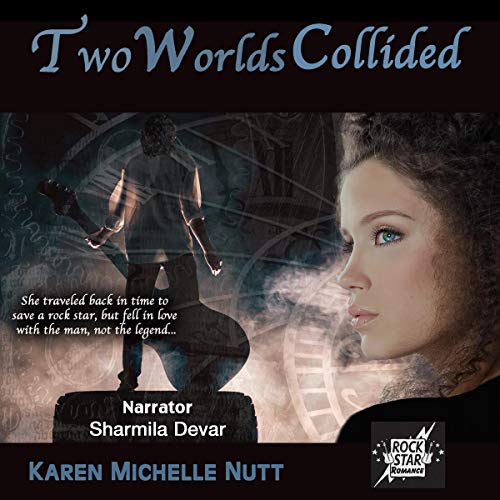 Evie Reid, on a whim, agrees to travel back in time to 1997 to change bad boy Bellamy Lovel's path of destruction. She's smart with a college degree, but she's still fan-girl crazy for the rock band Civilized Heathens. Evie knows despite all Bellamy's smiles and enthusiasm on the stage, he's destined to end it all on one lonely night in a hotel room unless she can change his path.

Bellamy isn't keen on having Evie as his personal assistant, hired by his band mates to watch over him and keep him on schedule. However, there is something about the woman that sparks his interest, despite his best to ignore her. When darkness threatens to consume him, he realizes she may be the only light that will chase the shadows away.

"A romance that will rock your world." (Otherworldly Reviews)

Saving a Life and Finding a Timeless Love

The idea of a woman traveling back to change the past so that the lead singer of her favorite band and a person she has crushed on since her teens doesn’t end up committing suicide tickled my fancy. This was a new to me author and narrator so I anticipated it all around.

Evie and her fan club friends are mourning the loss of a singer who was legendary during his life and his fame for his talented singing lives on ten years later. Her little story of a teenage connection with him and the fact that she still has his necklace from the encounter enthuses her friend to perform some witchery to send her back to the past. From there, she has the task of getting close to Bellamy and helping him find a reason to keep on living and fight through his personal demons.

A story like this could go a few different ways and, in truth, I took a chance on it because I’m not generally drawn to rockstar romances. But, this one took on a fairytale quality early on so that reality was heavily dosed with romance. The rocker world is there, but there is something very sweet about Evie and Bellamy’s summer of romance. I liked the tension of knowing that Evie is on a time schedule to help him before she has to go back to the future. And, I liked that she knew upfront because of the magic, that she did indeed have to go so there wasn’t that tugging one way or the other. She could only hope that he would indeed grasp hold of life and dream that he’d come and find her afterward.

The unique twist for me was when the story came back to the present. I didn’t know how that was going to work anymore than Evie did, but it was fascinating how that was done and it added an interesting layer to the story. I loved the finish of this one and it was just as adorable as a fairytale rockstar romance ending could be.

Sharmila Devar was new to me and I enjoyed her husky voice for Evie and her friends and some of the male characters like her brother and the band members. But, I don’t think her voice for Bellamy was a good match. Her husky male voice was too hoarse for a strong lead singer’s voice would be, in my opinion. She did great at the emotion and pacing of the story that kept my attention from start to finish.

All in all, it was a blend of sweet and spice. Light, but deeply touching. A fabulous blend of time travel and rockstar romance.

My thanks to Audiobookworm Reviews and the author for the opportunity to listen to this book in exchange for an honest review.

This book was an interesting take on time travel. It almost completely takes place in 1997 other than the before and after in 2007. Loved the way it was done and how the changes caught up to them after the fact.

A very well told story. Karen Michelle Nutt has done a great job bringing this idea to life.
Sharmila Devar did a good job narrating this story with one small issue. The main character is a young woman but several times during the story her voice sounded like a grandma. Wasn’t too bad. I think it was just the timber of her voice that made the effect. Otherwise, a very good listen.