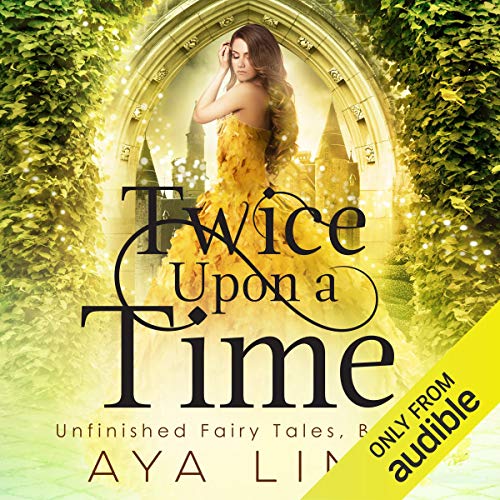 Twice Upon a Time

Seven years have passed since Kat left Athelia. Through the intervention of the goblin king's baby daughter, the book is re-opened and Kat is transported back to Story World. Upon learning she is given a second chance, Edward is determined not to let her go this time. His chance of succeeding, however, seems like nil. Kat doesn't remember anything of their past, she loathes life at court, and she's anxious to return to the modern world. Not to mention that there's a price to pay for tampering with the book again....

I have read these books on my Kindle about 5 times and loved this Audible version just as much.

4 stars — OK, this review is probably going to be a little scattered, and it’ll probably come across more negative than my actual feelings about the book. I’m more just explaining (probably to myself) why I didn’t rate it higher. I’m still loving this series, I just found it took me a bit longer to get invested.

First of all, Luci Christian is still hitting ALL MY BUTTONS as the narrator. I loved the different voices she used, and they were all consistent (I always knew who was talking). The amount of emotion she poured into it was just…gah! I cried so hard at times! She is definitely a fave narrator of mine, and she just proved it again in this one.

As I alluded to, this one started off a little slower for me, and I wasn’t exactly happy with the narrative…which is mostly just because I was so attached to Kat and Edward, and so Kat’s memory loss was absolutely HEARTBREAKING. There were times at the beginning where I felt like not much was happening, but then towards the end it felt like there was too much happening and I was getting overwhelmed!!

Kat was still just as feisty as always, though I was frustrated with her in the beginning because of course I was attached to Edward. It wasn’t as though I didn’t understand her confusion, panic, reservations, etc… But I wanted my HEA. I got back in sync with her as her memories started to return. And it was kind of fun to see that even before her memories returned, she still started to care for Edward, and want what was best for him. I loved how she helped him.

While I felt for Edward, and in general I still loved him a great deal, there were times he frustrated me as well. He was so focused on Kat, I felt like I didn’t get to see a lot of him outside of their relationship. But I loved how he respected her even as his heart broke.

There were a lot of little light moments within their romance that made me happy, and one of my highlights was definitely their date night.

I knew it wasn’t going to end all neat and tidy, but I wasn’t expecting the way it ended. It brought out my emotions again, but it was almost too much. It makes me wonder how things are going to go in the conclusion. And honestly? There are so many little side things going on—Kat’s work on the laws for the children, the Princess School stuff, Lady Gregory—I hope none of it gets lost in the shuffle in the last book.

As a side note, I noticed that the writing was a bit repetitive, especially at the beginning. Because I was listening it was a bit harder to pin down, but at one point I think Kat said the same thing with maybe only a word or two different just sentences apart. Basically, it could do with an additional edit pass to clean some of that stuff up, because it was noticeable enough that it affected my enjoyment.

So yeah… Obviously I’m still enamoured with this series, but I need that HEA like a coffee addict needs coffee…

I really love this series- it gives all the magic of a fairytale while addressing the real issues of modern day. I look forward to following Aya Ling’s undoubtedly successful career. This series has sparked a love for literature in my heart and given me a great escape from the mundane!

Really good plot, but MUCH TOO sensual for a Teen book.

I loved the twists, and the plot was fun, the writing was good and so was the performance. Overall it was a quite good story! However this says it's for 12-18 year olds and woah woah woah. That was super sexual and racy in spots! I had to skip several spots and got rather embarrassed if somebody overheard me listening to it!