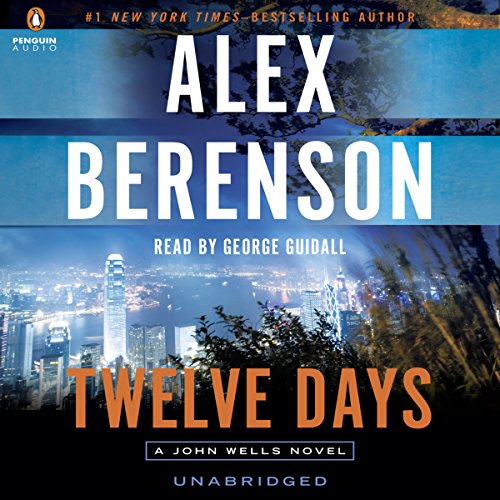 Wells, with his former CIA bosses Ellis Shafer and Vinnie Duto, has uncovered a staggering plot, a false-flag operation to convince the President to attack Iran. But they have no hard evidence, and no one at Langley or the White House will listen.

Now the President has set a deadline for Iran to give up its nuclear program, and the mullahs in Tehran - furious and frightened - have responded with a deadly terrorist attack. Wells, Shafer, and Duto know they have only twelve days to find the proof they need. They fan out, from Switzerland to Saudi Arabia, Israel to Russia, desperately trying to tease out the clues in their possession. Meanwhile, the United States is moving soldiers and Marines to Iran’s border. And Iran has mobilized its own squad of suicide bombers.

And as the days tick by and the obstacles mount, they realize that everything they do may not be enough.

The Most Under-Appreciated Man on Earth

The hero of Berenson’s captivating John Wells series may be the most under-appreciated man on earth. Working as an deep-cover C.I.A. agent — and, later, as an independent contractor — John Wells risks life and limb nearly every day of his life, accomplishing practically super-human feats of bravery and courage to save the world over and over again. Does he come home to a hero’s welcome? On the contrary: Half the time he returns to reprisals for having exposed somebody’s political butt. With John Wells, Berenson has created an unusual protagonist: Working undercover inside Al Qaeda for ten years in Afghanistan, speaking fluent Arabic, John Wells embraced Islam as his own religion, while rejecting the jihadist mentality. A quote from “Twelve Days” expresses his ambivalence about his faith:

“[Wells] didn’t believe for a minute that Mohammed had received messages straight from Allah, yet he sometimes sensed divine inspiration in the text … But contradictions and digressions filled the Koran’s lesser chapters — verses that sounded sweet in Arabic, but could barely be translated into any other language. Only a truly confident god would allow such malarky in his revealed word: ‘I command you to believe, no matter what I say!’.”

Throughout the John Wells series, we see a strange, symbiotic, love/hate mélange-à-trois developing between three of the main characters: Wells, the doer; Ellis Shafer, the Thinker; and Vinnie Duto, the Networker. Between the three of them, they always manage to accomplish what none of them could do alone … even though they don’t always like each other very much! This “holy trinity” solidifies in “Twelve Days,” which picks up one day after where “The Counterfeit Agent” left off. Although Berenson does briefly summarize the back-story from “The Counterfeit Agent” at the beginning of “Twelve Days” — via flashbacks and conversations — I highly recommend that you listen to “The Counterfeit Agent” before you listen to “Twelve Days,” as the two really constitute one novel. In fact, I strongly suggest that you start at the beginning of the series — with “The Faithful Spy,” an Edgar-Award-winning hum-dinger, by the way — and listen to the entire series in sequence. If you love thrillers, you won’t regret springing for this series! Typically, the end of “Twelve Days” sets us up for the next installment, which has not yet been published, as of this writing. I can’t wait!

I count Alex Berenson high among my Favorite Authors (The list also includes Michael Connelly, Lee Childs, Elizabeth Peters, Douglas Preston and Lincoln Child, to name just a few.), and I always look forward to the next John Wells adventure. I admire Alex Berenson for both his excellent writing-and-plotting skills and his extensive knowledge of current geo-political events. Berenson knows what is going on behind the headlines — as well he might, having studied history and economics at Yale, then having worked for fourteen years as a political correspondent and investigative reporter. This knowledge lends his novels a level of verisimilitude that makes them shine among thrillers. Narrator George Guidall, as always, does a fine job performing “Twelve Days.” Although Guidall lacks the skill with accents that might have enhanced this performance — “Twelve Days” could have benefited from a good Russian accent and a good South African accent — Guidall has the professional sense to not attempt bad accents; but, rather, distinguish characters with a variety of voices — which skill he does have. “Twelve Days” gives us an excellent audiobook, well-performed.

If you have followed the development of John Wells as a character and you like Berenson's style of writing, this is an audiobook that should not be missed.

Berenson has consistently been able to insert a core group realistic but flawed characters into well-developed, exciting plots that reflect current international intrigues. Though Wells and his allies are often bound together by circumstance rather than choice, it's hard not to "pull" for them – even like them for what they are.

For audiobook listeners white myself, continuing to use George Guidall as the performer is a big plus. Not only does Guidall master of a wide range of voices, language and accents, he also understands story pace and transitions.

A reader can start with this ninth novel about John Wells and still be satisfied – though it probably makes more sense to have read/listened to prior novels to appreciate the life transitions of the protagonists.

I look forward to Berenson's next John Wells release.

John Wells against the clock to avoid war!

Alex Berenson is the most under appreciated of the excellent modern espionage thriller writers such as Vince Flynn, Brad Thor, Mark Greaney, Tom Clancy, Barry Eisler, etc. Likewise his hero, John Wells, does not get the attention he deserves. Twelve Days is the 9th and best of the John Wells series. Wells and two of his ex-CIA bosses are fighting an effort within the US government to lead the US into war against Iran under false pretenses, and they have little time to expose the treachery. The novel has a tremendous amount of suspense.

There are a large number of really good narrators of audiobooks and George Guidall is among the best. His performance is flawless.

Very highly recommended, but I suggest reading some earlier books in the series first.

Underwhelming ending to the story that develops in two books.
At the end of the book I asked myself 'is this it?'.

Enjoyed this one the best

I think George Guidall could entertain me just by reading the phone book but he brings such life to John Wells. This was my favorite so far but I've enjoyed them all. Even the one nobody gave a positive review. I love the reviews and they do help but one man's trash is another man's treasure. Can't really put my finger on it but good entertainment for me. I do hope the series goes on.

I think this series has reached the end of its life. It's too bad b/c I could listen to George Guidall recite the tax code and I haven't found a decent espionage/mystery series since Mitch Rapp.

But I'm never a fan when an author just ends a book midway through the story (Book 8) and then you have to buy the next one (Book 9) to finish it. Also, more and more the books in this series are ending with very little wrap-up and details in the final outcome. It's almost like the Berenson hit a cap on the word limit and needed to stop.

All of the characters are getting long in the tooth and I'm surprised some are still around. It would have been nice if the series had started grooming another, younger character to be a protege of Wells and he could hand over the reins but that never happened. I think it was the first book where a college kid was a bouncer and became involved in one of the bombings. He said he was going to enlist afterward so I was hoping to see him in other books down the road.

This time out it's a team effort

Alex Berenson's Twelve Days is the conclusion to the previous installment, The Counterfeit Agent. "12" picks up where the last left off with Wells and his team of Vinny & Ellis having just 12 days to track down the real source of the HEU before the US invades Iran. While there are plenty of action scenes with classic Wells, John is beginning to rely more on his wits and quick thinking to get out of jams. Ellis shows that he still has the juice to gather the pertinent intelligence, while Vinny is clearly angling for something bigger in the future. John's family plays a cameo role suggesting their future involvement, particularly his son.

The pacing is excellent while never knowing which way John will handle any given situation. Some enemies are eliminated, but several new candidates for future stories are introduced. Only the Saudi king angle is beginning to wear a bit thin. John also is coming to grips with his failures in the relationship department suggesting a new love interest in the near future.

George Guidall's performance is simply outstanding with his rendition for Wells. His range for other characters along with tone and mood are perfect for the spy genre in general and Wells in particular. This story franchise with Guidall as narrator is pure listening enjoyment and not to be missed, although these tend to be quick listens due to a combination of story and narration.

Would you listen to Twelve Days again? Why?

I WILL listen to this book again. kept me on my toes. Only sorry it had to end.

Mr Guidall should be the reader for all great books. His reading is fluid and his characters are very believable, I always feel like I'm there when the story is unfolding I'll listen to any book that George reads !

With the tragic loss of Vince Flynn it has been a tough void to fill..Alex Berenson does much to fill it quite well. This book is no exception. Looking forward to the next Jon Wells book. Thank you Alex..

My absolute favorite book by Alex Berenson is "The Faithful Spy". I keep waiting for another book like that one. This one was just o.k. Not very memorable for me.

A Vivid and Vigerous Series of Adventure Novels

I've been hooked on the ``John Wells'' series of novels since I read the first in about 2006. Mr. Berenson does an excellent job of incorporating today's headlines (as well as future headlines) into this exciting series. The books are so much more than mere spy thrillers. The characters, both major and minor, have depth and add to my interest as a reader. In each book, I learn something about recent history, cultures and military technology. George Guidall is the perfect reader for this series. He adds to my enjoyment through his skilled use of accents and tones of voice. I look forward to Mr. Berenson's next ``John Wells'' novel.