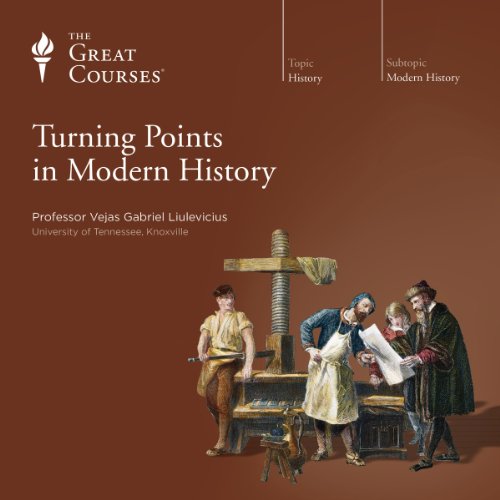 This lecture series takes you on a far-reaching journey around the globe - from China to the Americas to New Zealand - to shed light on how two dozen of the top discoveries, inventions, political upheavals, and ideas since 1400 have shaped the modern world. In just 24 thought-provoking lectures, you'll get the amazing story of how life as we know it developed.

Starting in the early 15th century and culminating in the age of social media, you'll encounter astounding threads that weave through the centuries, joining these turning points in ways that may come as a revelation. You'll also witness turning points with repercussions we can only speculate about because they are still very much in the process of turning.

Professor Liulevicius doesn't merely recount the greatest events of history, but rather has selected true catalysts in provoking changes in worldview. Some of the events you'll investigate, including the discovery of the New World and the fall of the Berlin Wall, will immediately resonate as watershed moments. The global significance of other pivotal events may only become apparent through the detailed analysis contained in these lectures, such as the publication of the Enlightenment-era Encyclopédie and the Russo-Japanese War - which has been historically overshadowed by the two world wars that followed.

As you discover how turning points such as the discovery of penicillin and the opening of East Berlin hinged on chance, accident, and, in some cases, sheer luck, you'll realize how easily history might have played out differently.

One of the best "Great Courses" I have listened to!

I have quite a few Great Courses in my library, on a variety of subjects. This one is by far my favorite. Professor Liulevicius has a great voice which does not turn monotonous. You can tell that he loves history and knows quite a lot about it.

Each lecture surrounds a certain event. Some of them are obvious such as the voyages of Columbus or the invention of the printing press. Some are surprising but make a lot of sense once you hear the lecture such as the fall of Constantinople in 1453.

Every single lecture is fun to listen to as you don't just hear facts and figures. Instead Professor Liulevicius tells us all about the people that lived through an event. We get to really know the people that changed history. This makes it more personal and real.

What I love the most is how he links past lectures to a current one. It could be someone using a technology from a past lecture or an idea. All of them come together. This makes you think about those lectures well after you listened to them. For that reason this course could easily be listened to at least a couple of other times.

What a perfect course!

Love so many of The Great Courses but the material, storytelling and passionate, clear presentation of this one blew my mind. Was listening on a walk today when realized he was wrapping up the course and I actually let out an audible whine! Going to have one more listen before my next book.

Most of the events in this books are well known however, the author makes a good case for why each is an actual turning point (other "turning point" books fail to do this). Even for those areas I disagree with or am a bit skeptical about, I like the connection made as it relates to the greater historical impact for each.

Well presented. Very enjoyable and informative. Interesting view on what constitute some great changes in our more recent history.

One of the best courses I've listened too. Great job. Didn't want it to end! I was a little worried that he would have an accent from the sound of his last name but there was no accent at all.

I've listened to several Great Courses and this may be my favorite. I enjoyed the world perspective as opposed to a concentration on European history. And, I enjoyed thinking about the instructor's reasons for adding something out of history to his list of Turning Points. Often, this was something new to me, but all were treated with an insightful perspective. Very enjoyable!

I loved this so much, I'm sad it had to end

This was the best of The Great Courses I've had the pleasure of listening to. Each chapter was fascinating and really captured many of the most significant events in modern history.

I read this over a year ago and am still thinking about it.

Not sure this needed an entire course buy this was a very good retelling of major historical points. Perhaps the final chapter (social media/internet communications) is telling of my review that this course would easily be summarized by a BuzzFeed listicle. That being said, this was thorough and did an excellent job describing both the lead up to and the after effects of each historically significant event.

I learned a lot about things I felt like I should already know, but didn't.
Great information presented in an non-boring way.

He knows how to keep the listener focused, in my opinion one of the best. Leaving me like applauding at the end of every lecture. Great. Thanks.

It's a mixture of political, scientific and technological turning points, quite personally chosen, well explained and excellently documented in the pdf. I heard at the same time Prof. Gregory's "The History of Science: 1700-1900". The two books complement each other quite well.