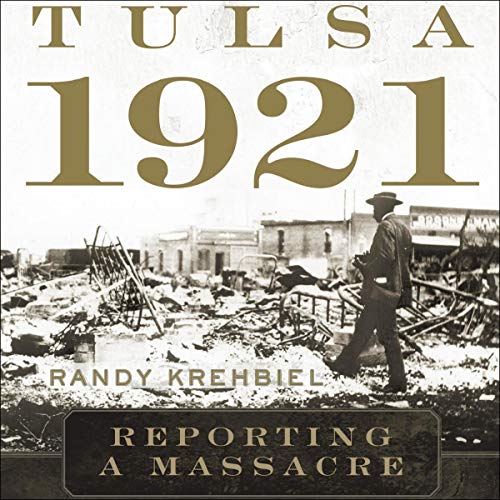 In 1921, Tulsa’s Greenwood District - known then as the nation’s “Black Wall Street” - was one of the most prosperous African American communities in the United States. But on May 31 of that year, a white mob, inflamed by rumors that a young black man had attempted to rape a white teenage girl, invaded Greenwood. By the end of the following day, thousands of homes and businesses lay in ashes, and perhaps, as many as 300 people were dead.

With the clarity and descriptive power of a veteran journalist, author Randy Krehbiel digs deep into the events and their aftermath and investigates decades-old questions about the local culture at the root of what one writer has called "a white-led pogrom".

Krehbiel analyzes local newspaper accounts in an unprecedented effort to gain insight into the minds of contemporary Tulsans. In the process, he considers how the Tulsa World, the Tulsa Tribune, and other publications contributed to the circumstances that led to the disaster and helped solidify enduring white justifications for it.

In its wake, black Tulsans were denied redress and even the right to rebuild on their own property, yet they ultimately prevailed and even prospered, despite systemic racism and the rise during the 1920s of the second Ku Klux Klan.

"The best book on the Tulsa tragedy of 1921 to come out in the past twenty years, or possibly ever." (Alfred L. Brophy, author of Reconstructing the Dreamland: The Tulsa Riot of 1921 - Race, Reparations, and Reconciliation)

This book is exceptional. It is very well written and the author has done extensive research. I appreciate how the author takes a non biased approach presenting information. Thank you for writing about this tragedy in American history.

This book tells the story of the events believed to have happened which lead to the destruction of what has become known as the black wall street – 35 square blocks in Tulsa known as Greenwood. In 1921 it was a considered the Black section of Tulsa. Where doctors and other Blacks lived. That is until a mis-understanding lead to the destruction of the entire area and the death of many Black and white Tulsa citizens. This story has become a issue because for the most part it has been left out of the history books. Recommendation: Read It, but don’t believe everything you read.

reader sometimes overcome with a flurry of sometimes trivial facts and names. Still an excellent history and an effective narrator