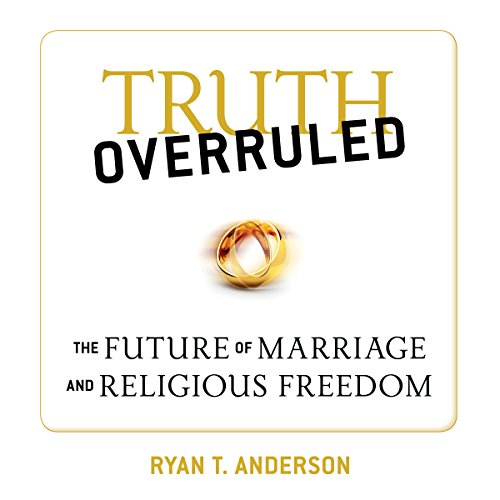 The Supreme Court has issued a decision, but that doesn't end the debate. Now that the Supreme Court has ruled, Americans face momentous debates about the nature of marriage and religious liberty. Because the Court has redefined marriage in all 50 states, we have to energetically protect our freedom to live according to conscience and faith as we work to rebuild a strong marriage culture.

In the first book to respond to the Supreme Court's decision on same-sex marriage, Ryan Anderson draws on the best philosophy and social science to explain what marriage is, why it matters for public policy, and the consequences of its legal redefinition.

Attacks on religious liberty - predicated on the bogus equation of opposition to same-sex marriage with racism - have already begun, and modest efforts in Indiana and other states to protect believers' rights have met with hysterics from media and corporate elites. Anderson tells the stories of innocent citizens who have been coerced and penalized by the government and offers a strategy to protect the natural right of religious liberty.

Anderson reports on the latest research on same-sex parenting, filling it out with the testimony of children raised by gays and lesbians. He closes with a comprehensive roadmap on how to rebuild a culture of marriage, with work to be done by everyone.

The nation's leading defender of marriage in the media and on university campuses, Ryan Anderson has produced the must-hear manual on where to go from here. There are reasonable and compelling arguments for the truth about marriage, but too many of our neighbors haven't heard them. Truth is never on the wrong side of history, but we have to make the case. We will decide which side of history we are on.

I had to read (listen) to this book for a school assignment. I wasn’t sure about it when I started due to negative reviews I read, but as I listened, I appreciated the clarification the author gave to big media stories. It was a reminder that the media constantly blows things out of proportion to make a story of it. For readers that don’t understand those that take the stance that marriage should only be between a man and a woman, this book explains the reasoning behind that belief. I did not find him to be bigoted at all. He was respectful to others and requests that same respect for the religious beliefs of those that don’t agree with the newer laws.

The secular argument that won me over.

This is a great audio of a very readable book for the non-academic, like myself. What I love about this book the most is that it doesn't lean on religious arguments. From premise to conclusion, this book lays out a strong secular case for why traditional marriage is matters, despite the recent SCOTUS decision. It's the argument that took me from a libertarian view of marriage to government promotion of traditional marriage.

The author's argument is logical and based not only on natural law but on solid research. Concerns about vulnerable populations are expressed clearly and compassionately.

Great information on the truth about marriage

Culture certainly has devalued marriage and it is really sad. Marriage is not just about a deep bond between two people. This book unravels so many lies in today's culture about marriage.

Uses science to support its arguments

I appreciate the truth that is spoken in Truth Overruled. I’ve struggled with how to explain to my teenager that gay marriage does not benefit a healthy society. When you need to protect the most vulnerable -children-the science, biology, and statistics discussed in this book support raising them in a male and female marriage. It’s all about the children.

Get this book before cancel culture takes it away

This book is amazing at explaining what marriage is and why it should always be between a man and woman to create families.

Thank you for writing this book

Wonderfully articulate book about the importance of traditional marriage to strengthen children and society. Couldn't have been easy to publish this - thank you for your courage!