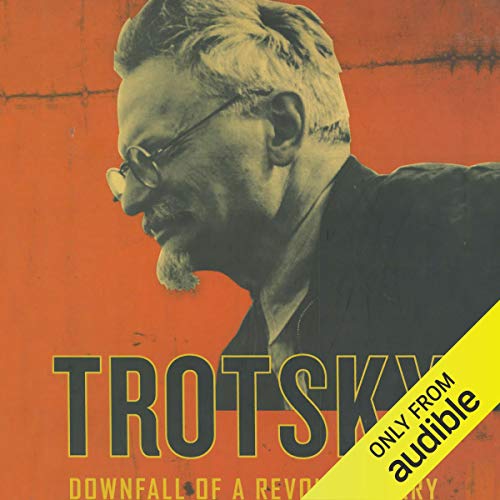 Bertrand Patenaude is an international relations scholar, writer, and professor who has written several well-received books on Russian history. In Trotsky: Downfall of a Revolutionary, Patenaude places the controversial figure of Leon Trotsky in Mexico, where he is in exile before World War II. Interspersed with flashbacks to pivotal moments in Trotsky's career with the Red Army and Stalin in Soviet Russia, the book explores Trotsky's wartime relationships with Diego Rivera, Frida Kahlo, Saul Bellow, and others. The book is rich and dramatic, packed with affairs, attempted assassinations, and secret police, and English actor Matthew Waterson apportions his sentences to magnify Trotsky's exciting scenes even further.

In Trotsky: Downfall of a Revolutionary, Stanford University lecturer Bertrand M. Patenaude tells the dramatic story of Leon Trotsky's final years in exile in Mexico. Shedding new light on Trotsky's tumultuous friendship with painter Diego Rivera, his affair with Rivera’s wife Frida Kahlo, and his torment as his family and comrades become victims of the Great Terror, Trotsky: Downfall ofa Revolutionary brilliantly illuminates the fateful and dramatic life of one of history's most famous yet elusive figures.

I found this book to be absolutely entertaining and absolutely historically accurate, to the best I can tell. However though it is historically accurate I think its interpretations are inaccurate. I do not think the USSR’s dissolution was inevitable, and I think that things could’ve ended differently if Trotsky was General Secretary. And though the characterization of Trotsky was fairer than most, I think his flaws were overly accentuated. This is still a fantastic book and it definitely deserves a read (or in this case a listen).

What made the experience of listening to Trotsky the most enjoyable?

I didn't know the details of Trotsky's story so it was really interesting to hear the details.

Waterson has a good voice and is easy to listen to, but at times it sounds like someone else's voice is dubbed in. It's a little jarring.

What made the experience of listening to Trotsky the most enjoyable?

It was a good book on Leon Trotsky. Many hard line "Trotskyists" will dislike the book, but they dislike most books that are not 100% in line with their factions views. Trotsky with Lenin were the greatest fighters for humanity; however, the authors final conclusions that "Trotsky had nothing," and his complete discounting of Red October, makes it necessary to take this work with many grains of salt.

A very unique man that played a major role in history. Glad to have gained so much more insight into who he was.