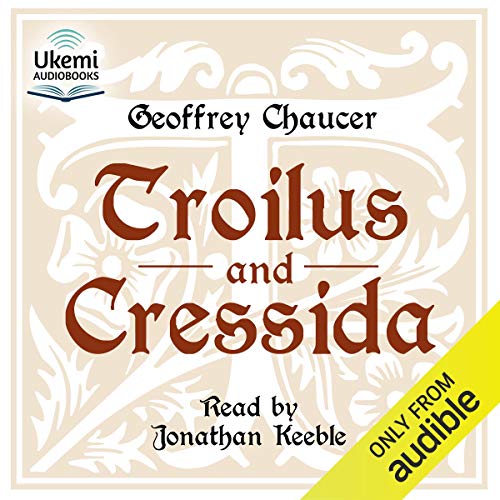 Considered one of Chaucer’s finest poems, second only to The Canterbury Tales in richness and depth, Troilus and Cressida is a tragic love story set against the background of the siege of Troy by the Greeks.

Written in the 1380s, it presents Troilus, son of Priam and younger brother of Hector, as a Trojan warrior of renown who sees, and falls deeply in love with, the beautiful Cressida. Cressida is the daughter of Calchas, a Trojan priest and seer who, having divined the eventual fall of Troy, has deserted to Agamemnon’s camp, leaving his daughter in the besieged city. With the help of Pander, friend to Troilus and uncle to Cressida, the young couple meet and merge - but with unhappy consequences.

Chaucer’s long poem is cast in seven-line rhymed stanzas and is eased out of Middle English to be presented here in a lively modern verse translation by George Philip Krapp, who has retained not only the structure but its spirit. Emotions run high, the love is intense, the story unfolds with a dramatic urgency that draws the listener ever onwards; yet Chaucer is Chaucer, and there are times when a deft line, a light insinuation, suggests the smile, the benevolence and the immediacy of the author of The Canterbury Tales.

Troilus and Cressida, though often overshadowed by the Tales and time (and even Shakespeare, who took up the story) is a monument in its own right in the canon of English literature. Once listened to it will never be forgotten.

Chaucer’s take on the Trojan War.

I wasn't familiar with the translation (by the early 20th century scholar George Philip Krapp), but it reads smoothly: the rhymes come through with satisfying regularity, and the syntax remains simple and straightforward. Krapp uses the same 7-line stanza as Chaucer, with the rhyme scheme ababbcc. There are some archaisms — some “thees” and “thines” — but they do not distract; in fact I would say they add to the charm of this very accessible version.

I have to admit that in the poem and in the play Shakespeare based on it, I don’t quite get one of the central issues. Troilus is single; Cressida is a widow; why can’t they just get married? Apparently, at least as far as Chaucer is concerned, it’s a matter of class: Troilus is a son of Priam, and therefore royal; Cressida isn’t. If there's anything more than that, I missed it.

But take that as a given. To come together, they need the help of Cressida’s uncle Pandar (or Pandarus). He negotiates the time and place for them to sleep together, and in the process gives his name to panders everywhere. He plans their first sexual encounter like a bank heist (pausing several times to talk down Cressida’s resistance). He says at one point that he doesn’t want to be his niece’s “pimp,” but in effect that’s exactly what he becomes.

So.... they come together first as smitten lovebirds — at least Troilus is smitten; Cressida has to talk herself into it — and then, secretly and guiltily, as lovers. It doesn’t end well. Her father goes over to the Greeks and takes her with him. Troilus continues to carry the torch, but Cressida, alone and afraid, accepts the advances of the Greek warrior Diomede.

A brief interjection: Chaucer presents Cressida's dilemma sympathetically, letting us overhear her internal debate; but he still condemns her. I have to wonder — what did these medieval lunatics expect her to do? To try to escape would mean turning her back on her father; to reject Diomede would be to embrace a life of isolation and poverty.

Jonathan Keeble is a great reader for this. I especially enjoyed his reading of Pandarus, but he does a remarkable job with all the characters. The grief of Troilus as he realizes Cressida is truly lost to him is heartbreaking.