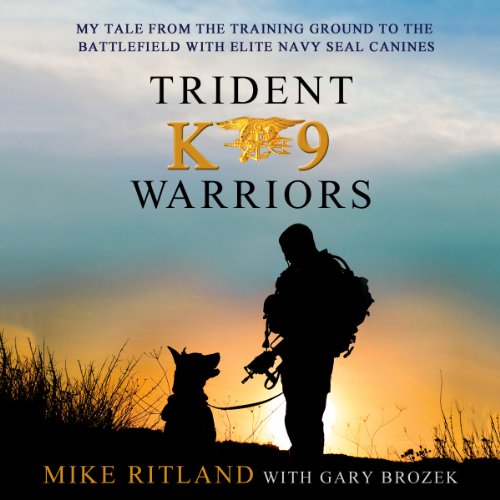 As a SEAL on combat deployment in Iraq, Mike Ritland saw a military working dog in action and instantly knew he found his true calling. While the SEAL teams had used dogs in the past, they never had dogs trained specifically by SEALs, for SEALs. To fill this void, Ritland started his own company after he retired, training and supplying dogs for the West Coast SEAL teams. He knew that less than 1% of all working dogs had what it takes to contribute to the success of our nation’s elite combat units.

He searched the globe for animals who fit this specific profile. These specialized canines had to pass rigorous selection tests before their serious training could begin. The results were a revelation: highly trained working dogs capable of handling both detection and apprehension work in the most extreme environments and the tensest of battlefield conditions. Though fiercely aggressive and athletic, these dogs develop a close bond with the handlers they work side by side with and the other team members. Truly integrating themselves into their units, these K9 warriors are much like their human counterparts - unwavering in their devotion to duty, strong enough and tough enough to take it to the enemy through pain, injury, or fear.

For the first time ever, listeners get an inside look at these elite K9 warriors - who they are, how they are trained, and the extreme missions they undertake saving countless lives asking for little in the way of reward. From detecting explosives to eliminating the bad guys, these powerful dogs are also some of the smartest and most highly skilled working animals on the planet.

Best Dog and Action Book Ever

Why I will listen to this book again? Because the writer (in fact the narrator) explains so clearly how these dogs are trained from the earliest stage of their life, and how they evolves in a special operation, that you are sent directly with them and the soldiers in another way of life, full of trust and loyalty. The selective process and the values defended by the author (for dogs and human) are very interesting too, better than a dumb self-improvement guide.

Do I think about another comparable book. No One, Unique.

Which character is your favorite? It is not a Disney book, characters have no importance at all, only facts.

In fact, I wanted to hear that book in only one time, but I fall a sleep at 5am.

Other comments? Yes very good book, brought me more than I wanted.

This book is definitely worth every penny. It delivers a unique story that is both written and read very well. I'm really not sure why one of the other reviewers says this is a boring history book. There is some history in the book, but(as the author states) it really serves the listener, as to really understand what goes into the "making" of these dogs, you need to know some of "military-dog" related history. But this book is by no means only this(history). It delivers exactly what the title says, giving many different accounts/stories of the dogs and their SEAL handlers, both state side and down-range. And, just as the books title states, you also get some of the authors background along with detailed accounts of his training of the dogs as well as working them.
The narrator of the book(Jeff Gurner) does a great job reading, putting just the right amount of emotion into it. Mr.Hurner has also clearly done his "homework", since he pronounces the military-terms correctly. I point this out because, most unfortunately other "Navy-Seal" book narrators have not. I'm specifically referring the pronunciation of BUDS, which for some reason always ends up getting pronounced incorrectly, like having each individual letter spelled out or a myriad of other incorrect ways.

So, I guess if I were "forced" to find fault in this book, this only thing I could say is that it's to short.

If you could sum up Trident K9 Warriors in three words, what would they be?

I am sure this is a book many will not purchase unless they have a passion for working dogs and what they can do for us as humans. The stories in this book however, demonstrate how little we rely on what I would call a low tech solution to the problems we are facing today in modern warfare. K9's have a sense, we as humans have only begun to scratch the surface of what these animals can do. They protect us and lead us to safer environments through a growing need find peace in a difficult and challenging set of problems. These animals and trainers/handlers demonstrate how useful of a tool these animals are to the soldiers they support. This book is a great account of this low tech solution has been overlooked by our leaders to solve problems. These animals, when used in combination with technologies will help our soldiers and police officers to serve and protect us more in the future. This book is a great account of how these animals are used in conflicts today around the world.

the same as Navy Seal dogs!

they have the same story under 2 different titles!? It's misleading I wasted 15$. wish I could get a refund....

What made the experience of listening to Trident K9 Warriors the most enjoyable?

The knowledge and thoughtfulness and attention to detail of the author.

What was one of the most memorable moments of Trident K9 Warriors?

Descriptions of some of the training the dogs go through. I didn't realize they do aerobics and lift weights (for lack of a better term) to build their endurance. Makes sense, I was just surprised to hear it.

The MWD that chases down an Insurgent trying to get away on a moped.

To me it was fascinating from cover to cover, but no, not all in one sitting. I like breaking it up.

If not the best book I've listened to it is certainly in my top 3. If you like dogs, and the military, this is your book. Most of it covers selection of the dogs, training them and what is expected of the handlers and team mates. The last 1/3 or so is stories about events that take place down range.

Would you listen to Trident K9 Warriors again? Why?

I would have to say the various SOF dogs based on the stories he told.

Mainly the part where a Seal had to give his dog up due to him having another deployment left and the Seal leaving active duty. It was such a great story.

Excellent book. I highly recommend it to anyone slightly interested in MWDs.

Would you listen to Trident K9 Warriors again? Why?

I liked this book A LOT!! I have performance dogs and compete in Canine Nosework with them. This book goes into great detail on the training and working with scent detection dogs and it all makes great sense and confirms what I've been taught. LOVE the positive reinforcement training aspect too!!

I liked how the main character explained in detail the training and how the dogs worked in the field.

don't really have a favorite, but I really liked the funny scenarios.

How the handler dealt with the dog who didn't have an IED to find for several days started to shutdown. I liked how he returned to several positive training moments to rejuvenate the dog's drive. Reminded me of working too many empty rooms for NW3 training.

I didn't know dogs worked with navy seals and I feel proud that they do.

Covers the same material as Navy Seal Dogs. There is enough fresh stuff to make it worth the listen.

Working Dog's from a SEAL point of view.

Yes, Good read for anyone that wants a better understanding of what K9 units do and wants an insight into a vague idea of what working dogs and methods used to train them. I say vague because while the book has plenty of details there's much more to it than you would think.

Most interesting to me was talking about the training methods used to teach the dogs and how they would select them. Surprisingly some of the deployment stories weren't as good as I had expected. Maybe they just weren't written in a very exciting way. Those parts seemed a little dry.

No, It was pretty matter of fact and I wasn't really surprised by any of it. Good insights, but nothing crazy. It will give you a respect for the dog's, trainers, and handlers and what they go through and have to know.

Jumps around a little too much. The story doesn't seem to have an overall story that binds everything together. It jumps from deployments, to training, to history etc. Then kind of randomly selects one of those three to go back through in various orders.

What other book might you compare Trident K9 Warriors to and why?

Which character – as performed by Jeff Gurner – was your favorite?

After reading this book if not famililar with working dog breeds, do not get the bright idea to purchase one.

A really interesting book that kept me awake long hours, could'nt stop listening.
To those who like war books and dogs, this is a must.