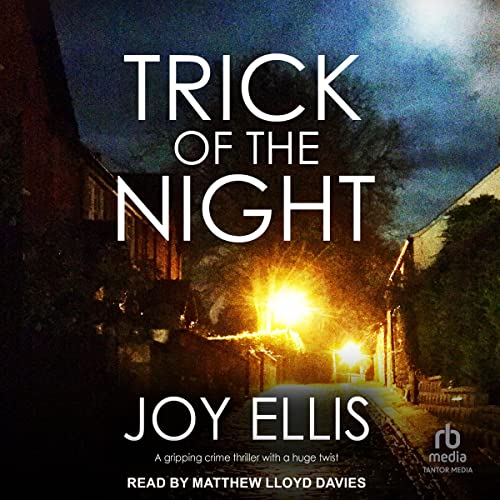 Trick of the Night

Matt and Liz may have retired from the police, but that doesn't guarantee a quiet life.

A deserted building. A face in the window. A face that shouldn't be there.

Photography student Toby Unsworth has found the location for the perfect night-time shoot. A cobbled street in the old part of Fenfleet. Later, when he looks at the images on his laptop, he thinks he sees a woman's face in the window of an old, disused building. He asks his housemate Alex to come and take a look . . .

Two days later, Toby and Alex are dead. Carbon monoxide poisoning. An unfortunate accident. But Alex's mother doesn't believe it. She hires Matt and Liz to find out the truth.

Meanwhile, nine-year-old Simon is missing. He was staying with his Aunt Jessie in a cottage on the edge of the marsh. And his older sister Kellie is increasingly worried.

Matt and Liz's investigations reveal that something very big and very dangerous has descended on the small market town of Fenfleet. And if they don't get to the bottom of it, more deaths will follow.

A disappointment in story and narrator

A subpar story with a narrator who read with was, for me, the wrong delivery of the sentences. I found myself wanting to repeat them with the emphasis in the right places. On a production note, the speed of the recording was too fast. When I adjusted to .9, it sounded much more natural. I saw the ending coming about halfway through and thought it a cheap trick. Sorry.

I found the Narrator hard to understand at times. Just lost interest in the story.

A good enough tale, but not up to her usual standards. What totally ruined the book for me, though, was the reader. He read way too quickly. His volume varied from assertively loud to a whisper within the course of a minute, making it almost impossible to use earbuds, or while driving, or before going to sleep: Typically the times when I’m most likely to prefer an audible book.

I'm a fan of Joy Ellis's mysteries. Even though they are formulaic, she creates good characters, well described scenes and creates believable atmosphere in all the Fens books. But I couldn't get beyond the first few chapters in Trick of the Night. The story was promising but the narrator is very difficult to understand, he seemed to have gravel in his mouth, no clear enunciation. I expect excellent narrators on Audible -- and on Ellis's books, but this was far from the case for Trick of the Night.

Trick of the night

There are enough twists and turns in this story to satisfy any mystery buff. A person doesn’t have to start at the beginning of this series…. But I think it is much more interesting to do so!

This is the worst Joy Ellis book I have ever read. Multiple disorganized plot lines and ridiculous, nonsensical twists. Information deliberately withheld to create false drama. Matt is a gasbag and Liz is crude, smug and generally unlikeable. Done with this series.

It is the first Joy Ellis book I struggled with. Because I like her books so much, I stopped myself giving up, but the first half of the book is slow and not overly gripping. It gets better and in the end the story is actually quite good, but somehow I felt that it cannot stand up to Ellis other books. Brilliantly narrated though.