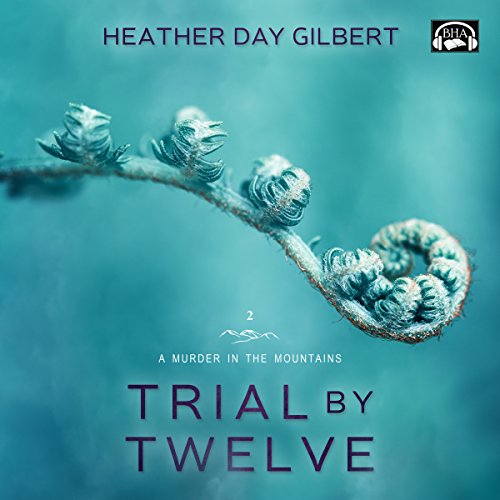 Trial by Twelve is the 2015 Grace Award winner for Mystery/Romantic Suspense/Thriller/Historical Suspense.

Tess Spencer loves her low-key job at the Crystal Mountain Spa, which allows her plenty of down-time with her one-year old daughter and lawyer husband, Thomas. But when a pool installation turns up eight skeletons in the spa's back yard, Tess becomes entangled in a sleuthing job destined to go awry.

As the investigation gets underway, someone dumps a fresh body near the excavated burial site, confirming unspeakable fears. A serial killer has returned to Buckneck, West Virginia...a skilled hunter with a unique taste in prey.

When Tess agrees to help the cunning Detective Tucker gather clues from the inside, she discovers the posh spa hides more than dead bodies. Even as she sifts through layers of deceit, Tess realizes too late that the killer's sights have zeroed in on her.

An unpredictable psychological mystery replete with memorable characters, Trial by Twelve is book two in A Murder in the Mountains series.

This story is great. I love the setting, the author makes you feel as though you are there in Buckneck WV, and the characters feel like friends.
The mystery kept the story moving right along, and I had to keep listening-it was very compelling!
If you like Christian mystery/suspense novels, I recommend this one!

I read and enjoyed the first book in the Murder in the Mountains series, Miranda Warning, last year, so I had high expectations for this second one. I wasn’t disappointed! Although it is a standalone book, I loved it as a sequel, glad to return to the Appalachian community.
Ms. Gilbert writes some of the most natural, realistic characters I have ever read, especially within the Spencer family. Their relationships feel genuine. I like all of them, but Nikki Jo is my favorite. I want to be that mother-in-law.
The author’s skill with characterization is clear from the start. Tess Spencer is working a part-time job at the beginning of this book, at an upscale spa. Her coworkers are odd, and her boss is unpredictable. When the inevitable body is discovered, an extraordinary law man shows up to solve the problem. Various minor characters come and go, and they are all interesting. And potential villains? Ms. Gilbert is good at dangling red herrings in front of her readers.
Tess’s husband, Thomas, seems more confident and active in this story than in the previous one, which adds depth to their relationship. Tess’s old friend, Axel, shows up in his guardian angel role and disappears again. The narrator of the audiobook does an excellent job of consistently distinguishing the characters.
As in Miranda Warning, Ms. Gilbert weaves the contemporary and historical stories together through a series of old letters, gradually revealing information that changes our perception of the situation and characters, ramping up the tension but not giving away the solution of the mystery until the end of the book. I didn’t guess whodunnit until the end, and there were a few surprises thrown in there.
I liked the book, and I’m looking forward to the next book in the series. The author also has a few other books out, including a Norse series that looks fascinating!

Compelling story. Great read. I had a hard time putting it down. Highly recommended!! Now... I'm onto my next Heather Day Gilbert book.

Returning to the Appalachian mountains, as though visiting friends. As good as the first book Miranda’s Warning. The narration is superb with Becky. Given audio for my voluntary review

Another page-turner from Heather Day Gilbert! Loved this book just as much as Miranda Warning, if not more. I loved spending more time with characters I'd already grown to love, and meeting new ones, too. The mystery is well-paced, with enough intrigue and drama to keep me guessing to the very end, sprinkled with humor that had me laughing out loud several times. I'm committed now--I'll read/listen to every Murder in the Mountains that this author writes!

I believe this had good reviews.
I heard the narrator on book one & I don't know what happened on this second narration. I could hardly stand to listen.

I enjoyed this book. Good characters, good story, suspense, drama....all of it. I really appreciated how the author sprinkles a message of faith gently into the story. Done well!