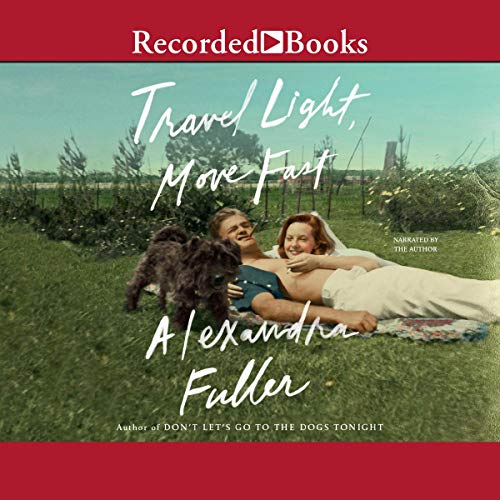 From best-selling author Alexandra Fuller, the utterly original story of her father, Tim Fuller, and a deeply felt tribute to a life well lived

Six months before he died in Budapest, Tim Fuller turned to his daughter: "Let me tell you the secret to life right now, in case I suddenly give up the ghost. You wouldn't want me taking all this wisdom with me to the grave." Then he lit his pipe, and stroked his dog Harry's head. Harry put his paw on his lap and they sat there the two of them, one man and his dog, keepers to the secret of life. "Well?" she asked. "Nothing comes to mind quite honestly, Bobo", he said, with some surprise. "Now that I think about it, maybe there isn't a secret to life. What do you think, Harry?" Harry gave Dad a look of utter agreement. He was a very superior dog. "Well, there you have it", Dad said.

After her father's sudden death, Alexandra Fuller realizes that if she is going to weather his loss, she will need to become the parts of him she misses most. So begins Travel Light, Move Fast, the unforgettable story of Tim Fuller, a self-exiled British black sheep who moved to Africa to fight in the Rhodesian War before settling as a banana farmer in Zambia. A man who preferred chaos to predictability, to revel in promise rather than wallow in regret, and was more afraid of becoming bored than of getting lost, he taught his daughters to live as if everything needed to happen altogether, all at once - or not at all. Now in the wake of his death, Fuller internalizes his lessons with clear eyes, and celebrates a man who swallowed life whole.

A master of time and memory, Fuller moves seamlessly between the days and months following her father's death as she and her mother return to his farm with his ashes and contend with his overwhelming absence, and her childhood spent running after him in southern and central Africa. Writing with reverent irreverence of the rollicking grand misadventures of her mother and father, bursting with pandemonium and tragedy, Fuller takes their insatiable appetite for life to heart. Here, in Fuller's Africa, is a story of joy, resilience, and vitality, from one of our finest writers.

"Listeners will feel as if they're having an intimate chat with acclaimed memoirist Alexandra Fuller.... Fuller smoothly modulates the tone and pitch of her soft, lilting voice to evoke the spirit and attitude of every person she includes in her accounts." (AudioFile Magazine)

I love Alexandra Fuller's writing. She can somehow describe the most heartbreaking events without making any of her books read like the all-too-common "here's the story of my horrendous childhood" or "my dramatically awful life." She simply tells the story in beautiful language and subtle humor. But I didn't know if I'd make it through this book. There's nothing wrong with her voice per se. In face, she's a better narrator than most authors who make the mistake of reading their own work. But she is slow! I solved the problem by speeding up the playback to 120%, at which speed she sounded like a normally paced speaking voice. I recommend others do the same.

I finished this excellent book very late last night - I couldn’t switch it off - Alexander Fuller touches on so many important issues - what it means to be a mother, father, daughter - what is it to be a “settler” in Africa - the cycles of violence that we internalise and how to overcome by looking forward and making the most of everything life throws at you.

I especially love how she reflects on the inherent contradictions and conflicts that arise from growing up as a white person in African.

Her reflections were, of course, of the ’70s and ’80s in Rhodesia - but it deeply resonated with my experience of growing up in the ’80s and 90’s South Africa and the inherent danger/uncertainty/contradiction that we internalised from birth.

I'm also in awe of her evident admiration, love and acceptance of her parents -she accepts their flaws and loves them for them - rather than despite their shortcoming.

The narration is excellent - her accents and impersonations sound just right.

Alexandra Fuller is one of my favorite authors. This is the first time I’ve listened to one of her books on audible and I now want to listen to all of them. This book was so heartbreaking but beautifully written. What a great story and another glimpse into her life.

I have had the incredible pleasure of having read all Alexandra Fuller’s book and found them all to be impossibly better than the previous one, and it still holds true: Travel Light, Move Fast is in every aspect a formidably well written book.

Hearing the book read by the author was fantastic. It made the book come alive. Fuller is such a profound author.

The sense of being there with Bob is tangible.

Cry the Beloved Country in the guise of the other side. Thank you Bobo. Enjoyed it all.

Alexandra Fuller confronts the complexities of coming of age in southern Africa with an acute and intensely personal empathy. I laughed, grinned, and felt the nostalgia for Africa deeply through her voice , but nothing can equal the sense of agonising loss she has suffered. Her father's memory served as a larger than life pillar upon which she could lean- thank you, from a fellow expat

I was not disappointed by this last book of Alexandra Fuller. I love her narration, her voice is absolutely perfect for her story telling and her story telling is riveting. The last chapter of this book was so very well written and listening to her voice, her pain, was visceral for me. Of course, I know Zambia and SE Africa well so I have the context which makes her story telling so alive for me. I know these people well, and I recognize them all in her vivid descriptions.

loved this story, i've read or listen to all of Fuller's books and this is my favorite. i could her the growth in her writing. her perspective from experiencing a life fully loved with all the peaks and valleys.

my book club read this book and we all loved it. some people commented that they needed some time to get used to her reading it. I enjoyed her self narration. it did take a little time to get used to it, she is a wonderful story teller and i enjoyed hearing her speak in her family's voices. it brought them to life.

thank you Ms. Fuller for sharing your emotions and helping describe feelings I've experienced but could never articulate.