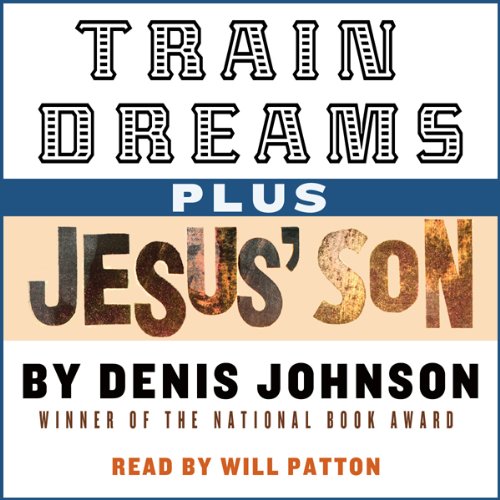 Here are two complete audiobooks by Denis Johnson, narrated by Will Patton. Listen to both Train Dreams, and Jesus’ Son, as well as an excerpt from Denis Johnson’s National Book Award-winning Tree of Smoke.

In Train Dreams Robert Grainer is a day laborer in the American West at the start of the 20th century—an ordinary man in extraordinary times. Buffeted by the loss of his family, Grainer struggles to make sense of this strange new world. As his story unfolds, we witness both his shocking personal defeats and the radical changes that transform America in his lifetime. Suffused with the history and landscapes of the American West—its otherworldly flora and fauna, its rugged loggers and bridge builders—this new novella by the National Book Award-winning author of Tree of Smoke captures the disappearance of a distinctly American way of life.

Jesus's Son, recently adapted for the screen, is a now-classic collection of 10 stories from the author of Resuscitation of a Hanged Man and Angels. The stories are narrated by a young man, a recovering alcoholic and heroin addict, whose dependencies have led him to petty crime, cruelty, betrayal, and various kinds of loss.

I Should Have Disliked These Stories

Trains Dreams was a slow, immersive story that artfully unfolds a story of aman's simple life. I thought I would not care for a story of a man who seemed to have no introspection, but as I read more deeply, I began to understand how well this character was wrought. On the surface he and the supporting characters appeared two-dimensional; but now I believe the author was writing with the simplicity of the times and demonstrated how people truly interacted and presented themselves. What is so uncanny about this novella is observing how the character's true self was revealed so subtly, almost to be missed, if the reading was not attended to more closely.

Jesus' Son--why would I care about a manipulative, opportunistic lost soul as the main character? Written in the first person, I felt like this was the author's real-life story and I did not like him. But the writing was mesmerizing, and for every reprehensible action or discussion the character embarked on, I was transported by the poetic narrative. A purely wonderful experience. And somehow as the character, in such simple steps, attempts to redeem himself, he becomes sympathetic and an individual to be cared about.

Both stories so masterfully written. The narration in both instances was spot-on, a beautiful voice that characterized his subjects with a straightforward but empathetic understanding.

Would you listen to Train Dreams and Jesus' Son again? Why?

Yes - certainly Train Dreams. The story affects you long after you stop listening. The writer has a very delicate touch, never descending to sentimentality or mawkishness.

Granier; a simple man's interaction with the world told with such dignity and pathos. Some scenes, like the fire, or the worlf girl, really affected me.

Where does Train Dreams and Jesus' Son rank among all the audiobooks you’ve listened to so far?

Both these books reveal a special voice in American literature, a perspective at once recognizable and distinctive.

Train Dreams explores the mindset of America as seen through a man's trials in developing the country, establishing a partnership, and interacting with the landscape.

Jesus' Son similarly explores the mindset of a distinctly contemporary creature, the modern addicted youth with little direction or self-awareness. The Mennonite couple's ordinary difficulties and the sense of possible redemption for the protagonist made for compelling listening, particularly with the book's infusion of humor.

“Frost had built on the dead grass, and it skirled beneath his feet. If not for this sound he’d have thought himself struck deaf, owing to the magnitude of the surrounding silence. All the night’s noises had stopped. The whole valley seemed to reflect his shock. He heard only his footsteps and the wolf-girl’s panting complaint.”
― Denis Johnson, Train Dreams

So, I've just read my second great American novella set in Northern Idaho. 'Train Dreams' isn't A River Runs Through It and Other Stories, but it travels similar territory. Just different actors and a different experience. It reads like the Spring sun had just risen on Cormac McCarthy's prose.

If you can describe any novel of less than 120 pages as epic, this novel would own that group. The story seems to float like a gossamer-thin cloud across the sky of the late 19th and early 20th century. It captures horizon-to-horizon the struggles and the dreams that disappeared as horses were replaced with cars and planes, and trains traveled back and forth.

“All these weirdos, and me getting a little better every day right in the midst of them. I had never known, never even imagined for a heartbeat, that there might be a place for people like us.”
― Denis Johnson, 'Jesus' Son'

Sometimes while reading this I thought I was reading Burroughs (just not so dark), other times J.G. Ballard (just not so cold), sometimes even Palahniuk (but with more of a poet's heart). It was madness, a fever dream, tied together with beauty. It was fragments of insanity stitched together with the stars. And sometimes the night of this novel was so dark, I couldn't see the stars, and the blood all looked black.

I didn't personally like it as much as 'Train Dreams', but that was just personal preference. I can see how some readers would absolutely adore it. It felt like I was looking at a painting of blood or a beautiful photograph of a corpse. I was both attracted to and repelled by the art and the vision.

Inheritors of the kingdom of heaven

Characters, protagonist, much more than being a living projection of poverty of the soul and the physical, the ideal Christians. Interesting read. The stream is developed well, touches ambiguous "things within the collective unconscious. For imitators of Johnson, the fault is in the disregard and misunderstanding of the love of depravity and drugs, drugs humanize the characters and are therefore a norm but also a reality to reach the point where the reader can connect to the story by "I am alive".

If you could sum up Train Dreams and Jesus' Son in three words, what would they be?

I did not listen to Jesus' Son but Train Dreams was excellent. The voice of the narrator was perfect for story. The story itself was great and I won't give away the end but I found it to be perfect.

There is only really a single character so I would guess it was that one. There are other characters but they do not play a huge role in the story.

What does Will Patton bring to the story that you wouldn’t experience if you just read the book?

As is true of most audible books I think the human voice, and Will Patton's in particular, brings something that is just not present in when I read.the

I thought the end was stunning. I didn't cry but only because my son was sitting next to me in the car.

Worth the price (or at least it's worth one of my annual tokens).

One of a Kind.. Top Shelf

Would you consider the audio edition of Train Dreams and Jesus' Son to be better than the print version?

I just have the audio version

I enjoyed all of the characters. I loved the talent and sa v v y of the author Denis Johnson.
Hope he writes more stuff. I'll buy it.

Did he do Water for Elephants? If so yes. Will Patton was perfect for the characters in Jesus' Son . Did a great job on Train Dreams also.

Would you try another book from Denis Johnson and/or Will Patton?

I was interested in Train Dreams because it is set in northern Idaho, near my home. I also wanted a taste of Denis Johnson's writing before hitting his bigger work. I am not sure that I will follow-up on Johnson's work. These left me luke-warm on his work.

What was one of the most memorable moments of Train Dreams and Jesus' Son?

That is the missing element -- not much memorable.

He did a good job.

Do you think Train Dreams and Jesus' Son needs a follow-up book? Why or why not?

No. Better to start over.

This review sounds more negative than I intended. The stories were good and creative, just not remarkable. (Isn't that what we want? Remarkable?)

One of the greats

So fantastic that these two books are available for one credit. They're both extraordinary and Patton does an amazing job, as he always does. Train Dreams is one of my most re-listened to audiobooks.

A great introduction to Denis Johnson

Train Dreams and Jesus Son are very different books. The former is a novella following the life of a man in the Pacific Northwest. The latter is a series of vignettes about people in the bottom tier of society. Both are profoundly moving, and the narrator does a great job of conveying the tales.