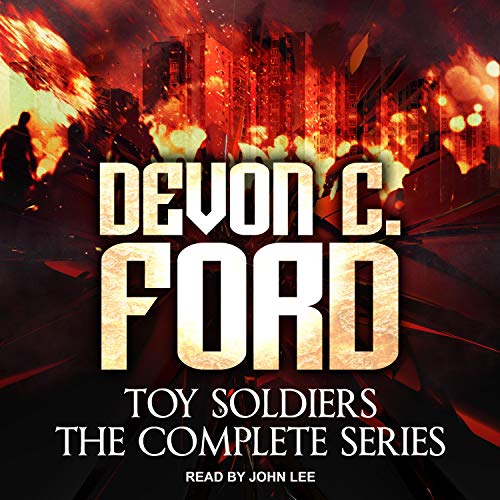 Apocalypse: Disorder and chaos ravage London when thousands are contaminated by the accidental discharge of an experimental bioweapon. The disease robs its hosts of rational thought, giving them a singular desire - find more living flesh to infect.

Aftermath: Peter, alone by choice and oddly thriving, finds himself suddenly responsible for the life of someone other than himself. Elsewhere, other survivors stake their own claims to land and resources, but the inexplicable swarms of undead threaten to gather and dissipate constantly.

Abandoned: The virus spreads to every corner of the country while the combined forces of the naval fleet set sail for deeper waters and leave the UK to its fate. The few groups that remain are separated after a fateful battle for England, left to their own devices.

Adaptation: The apocalypse continues in the penultimate chapter of the Toy Soldiers series. Will anybody make it out alive?

Annihilation: Fleeing the seemingly unstoppable enemy, the survivors pin their hopes on a final attempt for freedom, but that means they must turn their backs on their home forever.

I bought the whole series for a single credit and it was well worth every minute.
I highly recommend the story and author.

It felt like the books were in three parts. The first building the setting, a little slow. The second full with suspence and the third a litte faltering. But it closed with a solid ending and left with the hope of more to come.

I like the setting of The late 80s, excellent mix of unique characters, it felt gritty and realistic. well, as realistic as a zombie series can be. I love that the author didn't waste time diving into bizarre and far-fetched explanations about how the virus occurred(Extinction cycle 🤮). it's a pretty straightforward story which I appreciate. zombies, soldiers, civilians, a few jerks thrown in the mix, it was great.

takes place in UK in the 90s, refreshing point of view and very entertaining

could not really get into the book

I listen to a lot of apocalyptic, end of days, zombie books...A LOT and I'm always looking for a great story I can really lose myself in. I tried really hard to stay interested in this series, but I just could not. The most interesting thing in this series is Peter and how he, despite his tender age of about 8 or 9, has been surviving and caring for an even smaller child, but even that could not keep me interested enough to finish the series.

I was a huge fan of the After it Happened audiobooks, so trying out this series was a no-brainer. I was initially sad to discover that Bray didn't narrate Toy Soldiers, but I've gotta say - John Lee did a fantastic job, and the legitimate British accent was a nice touch. He did a very good job with the narration in terms of voices, tempo, and emotion.

Ive listened to Arisen , Retreat, and Mountain Man, Ive digested enough zombies (no pun intended) that I have zero interest in listening to a book that sounds too much like [insert name of some other zombie book]. This stands firmly on its own two feet. The story, characters, and plot are all unique enough that I was able to enjoy it for what it was, and never found myself likening it to a previously published novel.

For 38 hours of listening time, this is an absolute steal for 1 credit.

i loved this series. I took a chance on this because it was sold as a box set. im glad i did. I would glady buy this set separately and would still enjoy it just as much. its started a little slow but once it grabbed my attention it never let go.

I liked the first book and second books, and then I lost interest. The story is good and most of the characters are engaging, but I really could not sort out which army was which, and I mixed up the identities of the soldiers from the various military organizations. There were branches from the militaries of England, Scotland, America, Germany etc. My favorite characters were the little boy Peter and the little girl Amber. Captain Palmer. Sgt Johnson, Sgt Horton, and Insip the sniper were also good characters. After I quit the second book, I skipped to the last four chapters of the final book to see who lived and what was happening with the zombies. The ending was satisfying and the epilogue was excellent.

Epic story that loses a bit of momentum

Great story and characters. a bit slow in the middle but finishes strong and satisfying.

A new author to me, when I love zombie books. This is a great series and so much potential for more books or a branch off for the series to continue. I would love to see that happen.