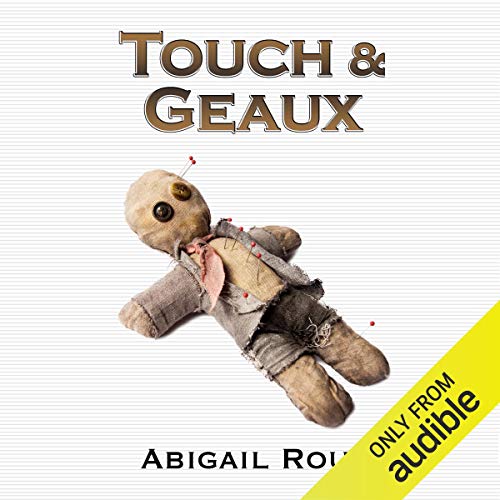 After having their faces plastered across the news during a high-profile case, FBI special agents Ty Grady and Zane Garrett have become more useful to the bureau posing for photo ops than working undercover. Just as Zane is beginning to consider retirement a viable option, Ty receives a distress call from a friend, leading them to a city rife with echoes from the past.

New Orleans wears its history on its streets, and it's the one place Ty's face could get him killed. Surrounded by trouble as soon as they land, Ty and Zane are swiftly confronted with a past from which Ty can't hide - one with a surprising connection to Zane's. As threats close in from all directions, both men must come to terms with the lives they've led and the lies they've told. They soon discover that not all their secrets are out yet, and nothing lasts forever.

I Have followed these characters faithfully; have enjoyed The series until now. It was just too ridiculous. Zane would have never ... my gosh I can't even… The author maybe thought there needed to be some conflict. The conflict she created was, in my opinion, utter nonsense.

Emotional and heavy, yet passionate and real.

Hell yes! I would recommend the entire series, one of the best MM series I've listened too.

Yes, it's a bit long though, so it took two sittings.

Special agents Ty Grady and Zane Garrett have been through a lot over the last decade, walked different paths until they eventually crossed. But Zane is about to find out that their paths actually crossed years before they became partners in the FBI, as well as some closely guarded secrets his lover would rather he not know.

Ty Grady may be a certifiable son of a bitch, but is loyal to a fault. So when his best friend and former team member, Nick O’Flaherty, calls that he and Doc are in trouble, of course Ty drops everything and rushes to the last place on earth he ever wanted to be again… New Orleans. Years ago when Ty was still on the force, he did an undercover stint in NOLA and didn’t leave on the best of terms. The city is all around a bad omen for Ty and his Sidewinder team mates, and several bad decisions are about to come back to try and kill them.

Zane is completely, totally, one hundred and ten percent in love with his partner. Of course the feelings are reciprocated, but Ty is a master manipulator that has redefined the definition of the words truth and lies. Both men are about to learn exactly how far they can be pushed before they break, how far they are willing to go for one another, and all I can tell you is… it is not pretty. Roux could have easily titled this series Murphy’s Law, because whatever can go wrong most definitely will if it involves Ty and Zane.

Lord but this book almost gave me a damn heartattack! There was a little bit of grown man angst that had me wanting to pull Zane through my iPod and smack him around a little, but thankfully, he pulled his head out of the nether regions eventually. That being said, I could completely understand why he was livid with Ty. It is a thin line between a moral obligation to the man you profess to love, the man you want to spend the rest of your life with, and being sworn to secrecy by your boss. And even though at the end of the day Ty and Zane are smart enough to figure out what is important and fight for it, I don’t think all the secrets have truly been shared.

Narrated by JF Harding and I love that I am already associating his voice to these characters after just one book. It read more like a continuation for me between Harding’s attention to details with the tones and nuances he has given the guys, and bringing them smoothly over to this story, and the story picking back up right where Stars & Stripes left off. Harding captured every emotion that poured of Roux’s words in this story. There were some seriously emotional and devastating aspects to this book and I could almost feel Ty and Zane’s pain when they spoke.

This book will put you through the ringer. It’s emotional and heavy, but it’s passionate and real as well. I was literally sitting on the edge of my seat at work while listening. There were a couple of times I was so engrossed that I sat with my fingers perched over the keyboard, staring blindly at the monitor because all I could concentrate on was Ty and Zane. I highly recommend this book/series if you enjoy highly detailed stories where the world and the characters are so real while you listen, that you not only become invested, you are embedded in their fictional lives, anxiously awaiting the next installment.

So good to read a series with two men in love who have balls and are bad asses. this is what Gay heroes in the world are really like.

I've read this book before but this was my first time doing the audio. This narrator is excellent and listening to it enhanced the story.

Loved this take on favorite in the series!

Would you listen to Touch & Geaux again? Why?

Absolutely it was my favorite book in the series and this audiobook has held true to the story!

Which character – as performed by J. F. Harding – was your favorite?

I enjoyed his take on Zane and Ty. A little different than what we got with Sean Crisden but I like that he kept to the basics of their personalities

Absolutely worth the credit!

J.F. Harding is now officially on my 'Fav Narrator' list! He definitely did not disappoint in bringing this book to life. You know you have a worthy narrator when you don't even realize someone is reading to you because of his flawless performance ...you are just there in the moment, visualizing the scene and walking the walk.
Now about the story...I was dreading the upcoming fight between Ty and Zane, but I survived and I can rest easy knowing it would never be that bad again. I so loved the team closeness and ribbing and fighting capabilities. And that scene with Zane on the hog riding to the rescue...just damn! So worth the credit!

That.Was.Amazing! I’m in shock at that ending. This was the best book of the whole series! I just finished and am sitting here with my mouth agape! It’s so rare that I want to turn around and reread a book after reading it, let alone an entire series, but this one does that for me and I’m not even done yet! I have 2 more books to read yet. My heart can’t take it. Give me the next stinkin’ book! What amazes me most, is the progression of the series. It is not the same story with different villains and good guys interchanged, but something fresh. Obviously there is a beginning, a crescendo, a climax, a resolution, and happy ending....and sometimes, as in Touch & Geaux, a cliffy. But the content of the story is different in each book....7 so far, and I am NOT bored by it in the least. As a matter of fact, I think Ball & Chain may be even bigger after the ending I just witnessed. Hot DAMN! I am so gonna read the Sidewinder series next as well. Those Marine boys are something.

Harding, again, did an excellent narration of all the predominately male cast. I liked hearing Digger’s Cajun-ish accent.

I saw another review where Zane was faulted for his anger in this book and I disagree. Zane and Tyler have a passionate relationship - although I was in my 20’s when in a similar relationship (minus FBI, guns, undercover agents & drug lords) we also fought and ran. Some of us learn who we are when we fight with every cell in our body. So glad that was 30 years ago for me, but listening to this book brought me back to when I was learning who I was and what I would accept in a partner and quality friends.

Did Not See This One Coming

Oh boy! What a rollercoaster ride, this one! Our favorite couple took a trip to New Orleans, once there, they're with Ty's friends from his Force Recon Team. Sounded like a great time, right? What could go wrong? Plenty!!!

I'm still not sure how I felt about this when I heard about it... how Ty and Zane had crossed paths before.. albeit unknowingly. I mean, it was completely plausible.

But there's more.. a big issue/fight/bridge of conflict that Ty and Zane had to cross. While I don't blame Zane, I can't condone the whole physical confrontation part. I'm glad it all worked out in the end though.

Towards the end of the story, it just became more and more improbable.. granted, it still could happen.. but there were a lot of things thrown in the mix that was completely new.

It just keeps getting better!

Just when you thought the action couldn't get better or their partnership tested, it did