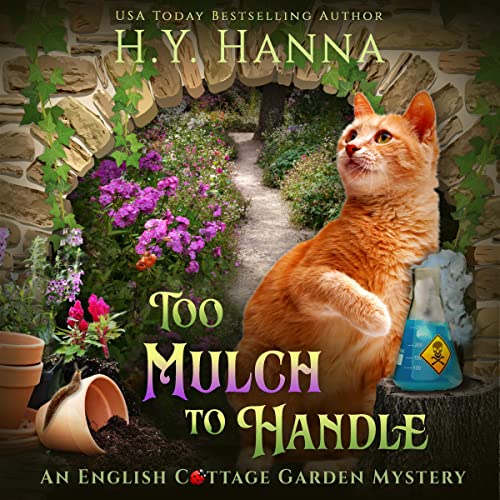 Too Mulch to Handle

Summer has arrived at Hollyhock Cottage, and romance is in the air. The roses are about to bloom, the garden nursery is filled with fragrance and color—and Poppy is going on her first proper "date" in a long time. Despite her qualms about mixing business with pleasure, she's accepted an invitation to dinner from a charming pesticide salesman and is looking forward to a night of flirting and fun. Instead, the evening ends with a chilling murder—it seems that insects weren't the only ones who found her handsome date toxic company!

Now, the hunt is on for a clever killer with a deadly knowledge of poisons. Luckily, Poppy can count on her "mad scientist" neighbor Bertie to help her sort the cyanides from the cycads, and she soon finds that her sleepy English village is crawling with suspects. There are hostile colleagues with scores to settle and jilted ex-girlfriends with points to prove... but was the murder connected to the victim's job? Or was the motive more personal?

Meanwhile, Poppy is grappling with problems at the cottage garden, too, from mysterious pests attacking her roses to disgruntled customers leaving in droves—not to mention a runaway slug leading her on a merry chase! Then there's Oren, the cheeky ginger tomcat, poking his paws where they don't belong. But when a threatening note arrives, Poppy realizes that cats aren't the only ones killed by curiosity. Can she solve the mystery and live to prune another day?

Not up to par

I have enjoyed the other HY Hanna series books, however, this one seems poorly done. The mystery was easy to figure out, the characters have not continued to develop, and it just wasn’t as entertaining as the other titles. Also, I agree with another reviewer that commented it preached too much. (On environmental issues). I agree with being environmentally conscious and don’t need to be convinced.
I will continue to read/listen to HY Hanna’s work, as I am hoping this was a one-off oops.

I usually love all of HY Hanna's books but the environmental elements were just about over the top with the preachiness levels. They got to be so much that I almost stopped listening. I understand that the characters mindset was important to the plot but it just seemed to drone on and on. If you can get past that, then the story is good and the rest of the book is very enjoyable.

One of my favorite in this series!

I loved this one! It just made me happy to read it. As Poppy is developing as a character I am liking her more and more! H Y Hannah is my favorite author 😄

I love this series for a light read. It is refreshing to see Poppy’s nursery finally beginning to succeed! The murder’s identity had me stumped until the last minute. I hope she finds out more about her father in the next book.

Another wonderful story by HY Hannah. Narrated by the amazing Pearl Hewitt. Easy and fun listening.

This story is very enjoyable to listen to and it’s funny. I love a good murder mystery.

Too Mulch to Handle, while not the best book in the English Cottage Garden series, was a fun book to listen to. The reader, Pearl Hewitt, is outstanding with the different voices. (However, I have to say her rendition of the song "When Irish Eyes Are Smiling" left much to be desired.)
I enjoy Poppy and her quirky friends for the most part. One character I did not like was the little old lady who made some rather rude remarks re/her grandson's anatomy which were completely unnecessary and (in my opinion) not funny at all, Other than that the book was a pretty clean read.
I have to admit I was able to figure out who the murderer was pretty quickly, and the repetitive references to chemicals vs. organic pesticides got a little tiresome after awhile. But the English countryside setting is charming, and I always learn something new about gardening from this series, which I like.
So, while this wouldn't be my favorite book in the series, it was still a fun listen, and if you like mysteries and gardening, you'll probably enjoy it.
I received a free copy of this Audible title in exchange for my honest review.

Too Mulch to Handle (English Cottage Garden Mysteries ~ Book 6) (The English Cottage Garden Mysteries), my twenty-third read from author H.Y. Hanna & the sixth book in her new English Cottage Garden Series. 7-hours 12-minutes/246-pages of an enjoyable cozy mystery. Cozy Mystery/romance, captivating primary character, what other blurbs can I use to describe these books? Oh well, buy the book, read the books, get into a good author and some good characters as I have. “I received a free Audible copy of this book and am voluntarily leaving a review." The gifting of this book did not affect my opinion of it. (RIP Marley January 20, 2014 - July 24, 2018).

I've been eagerly waiting for this book to come out on audio! Pearl Hewitt really makes this series come alive!
Poppy has been super excitedly waiting for Summer and her nursery buisness to take off and prove her grandmother proud when her best roses become in need of help.
After agreeing to go on a date with Andrew, the pesticide guy, everything starts going off the path. And with Andrew's murder Poppy herself becomes a suspect!
There are so many people with motive and means I never guessed who and how. I was draw in from the start of this story and was sad to see it end. I'm already excited for the next story!

*Disclaimer I was given a copy of this book from the author in exchange for my honest review. The above are my thoughts alone.*

H.Y. Hanna has written another wonderful addition to her English Cottage Garden series. Poppy and all her friends are preset as always as Poppy tries to find the answers to another mystery.
I highly recommend this book and series to fans of cozy mysteries.