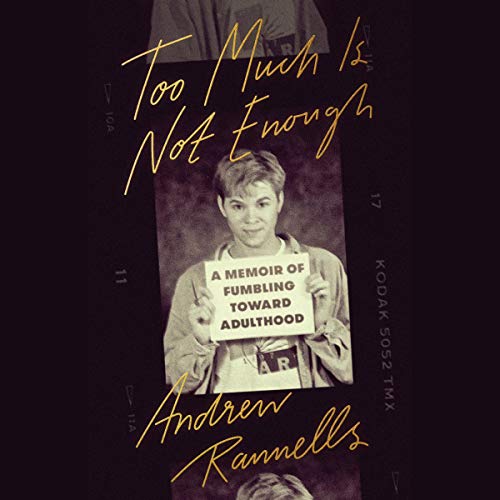 Too Much Is Not Enough

From the star of Broadway's The Book of Mormon and HBO's Girls, the heartfelt and hilarious coming-of-age memoir of a Midwestern boy surviving bad auditions, bad relationships, and some really bad highlights as he chases his dreams in New York City

"Candid, funny, crisp...honest and tender about lessons of the heart." (Vogue)

Named one of the Best Books of the Year by NPR

When Andrew Rannells left Nebraska for New York City in 1997, he, like many young hopefuls, saw the city as a chance to break free. To start over. To transform the fiercely ambitious but sexually confused teenager he saw in the mirror into the Broadway leading man of his dreams.

In Too Much Is Not Enough, Rannells takes us on the journey of a 20-something hungry to experience everything New York has to offer: new friends, wild nights, great art, standing ovations. At the heart of his hunger lies a powerful drive to reconcile the boy he was when he left Omaha with the man he desperately wants to be.

As Rannells fumbles his way towards the Great White Way, he also shares the drama of failed auditions and behind-the-curtain romances, the heartbreak of losing his father at the height of his struggle, and the exhilaration of making his Broadway debut in Hairspray at the age of 26. Along the way, he learns that you never really leave your past - or your family - behind; that the most painful, and perversely motivating, jobs are the ones you almost get; and that sometimes the most memorable nights with friends are marked not by the trendy club you danced at but by the recap over diner food afterward.

Honest and hilarious, Too Much Is Not Enough is an unforgettable look at love, loss, and the powerful forces that determine who we become.

Ce que les auditeurs disent de Too Much Is Not Enough

This book was a 10/10 for me. Andrew Rannells lives a totally different life than I do, but is oh so relatable. I think everyone could connect to the stories in this book in some way. I related to so many of his stories that I felt like I was listening to my own thoughts at times, ha!

The way Rannells tells stories is hilarious, honest and sometimes... heartbreaking. I thoroughly enjoyed this seven hour journey and I feel inspired to put in hard work and follow my dreams after listening - as cheesy as that sounds. I HIGHLY recommend this audiobook!

I don't appreciate all the sexual details but decided to overlook that to hear this guy's story. It's a great story, and a good education for us straight guys. Overall, worth the read if you can handle some sandpaper rawness.

Fun, entertaining, and easy read. Perfect when you need a nice refresher read. Andrew is so entertaining and charismatic and it easily transfers to his writing.

From A Fly Over State

A Mid-West “pretty boy” with a very condescending nature- in a need of a major attitude adjustment- I was really somewhat “nauseated” at times!
BTW- I’ve seen him on Broadway in 3 shows and have appreciated his performances

Looking Forward to More from Andrew

So enjoyed this memoir. Andrew is so truthful and insightful at the same time. He make me want to know more about the insights he gives us from the next years of his life. From his time in The Book of Mormon to the recent The Boys in the Band, I look forward to him sharing his thoughts on life and the wisdom he has learned.

The world is a stressful place these days and Andrew's book was an escape from that. I loved that he read his own book and his stories with both heartbreaking at time and full of humor others. I loved this book and highly recommend.

It is a pleasure to listen to Andrew Rannells share stories of his growing up and path towards fame. But really it is a story about a struggling actor in NYC, his failed auditions, and his eventful love life. While any famous person can share their early years, one hopes they end up famous by the end of the story. Andrew ends up in a Broadway Ensemble.
Two things set this apart: He has a very easy comfortable storytelling style.
He has the most incredible ability to remember and share details of his whole life.
I would listen to him actually achieve fame. This was a little lacking.

If you love theatre, either as a spectator or performer you’ll enjoy every second of this book. The journey, the highs and lows- all are relatable and told in Andrew’s amusing style. I wish he read every audible title I want to listen to because I’ve never had a more enjoyable audible experience.

I love that this is narrated by the author himself. I love how it gets very personal and real. About his past relationships, how they went well and how heartbreaking it was to hear how they didn't turn out so well. It has some very touching moments about family and grief which makes the author like a very real person not a one dimensional character. it's also inspiring to hear his journey to broadway from childhood dreams to his years in Manhattan.

I love everything about this book

This is a delightful book. I listened to the audible because I love Andrew’s voice. I felt his joys as well as those moments when he was heartbroken. And having lived in NYC, I relished seeing the City through his eyes.