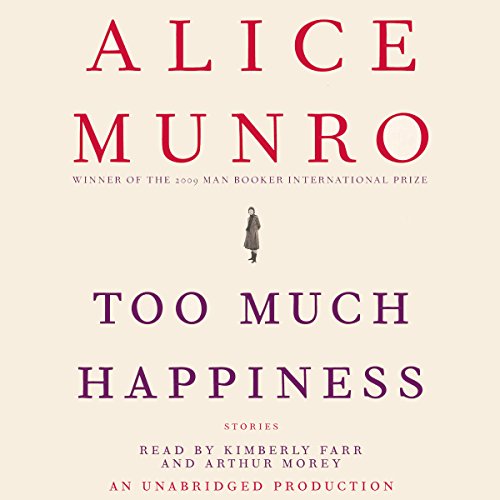 Ten superb new stories by one of our most beloved and admired writers - the winner of the 2009 Man Booker International Prize.

In the first story, a young wife and mother receives release from the unbearable pain of losing her three children from a most surprising source. In another, a young woman, in the aftermath of an unusual and humiliating seduction, reacts in a clever, if less than admirable, fashion.

Other stories uncover the "deep holes" in a marriage, the unsuspected cruelty of children, and how a boy's disfigured face provides both the good things in his life and the bad. And in the long title story, we accompany Sophia Kovalevsky - a late-19th-century Russian émigré and mathematician - on a winter journey that takes her from the Riviera, where she visits her lover, to Paris, Germany, and Denmark, where she has a fateful meeting with a local doctor, and finally to Sweden, where she teaches at the only university in Europe willing to employ a female mathematician.

With clarity and ease, Alice Munro once again renders complex, difficult events and emotions into stories that shed light on the unpredictable ways in which men and women accommodate and often transcend what happens in their lives.

Too Much Happiness is a compelling, provocative - even daring - collection.

Each story should start on its own track

The substance (performance, writing, etc.) of this audiobook is great, but the tracks are sloppily organized. This is a volume of short stories, so each story should begin at 0:00 on a separate track. For some reason, it's not organized like that. The third story, for example, starts roughly 55 minutes into the second track. Why do that? I remember Runaway, another Alice Munro collection, having the same problem. Please fix this.

Alice Munro is a must!!

I just loved all of the short stories featured in this book. Every single one of them was entrancing, interesting and plunged the reader in a different universe each time! I listen to audio books while I walk in the forest or in my neighborhood and Alice Munro kept me company for weeks on end!!

The narrator does a fine job. She goes on my list of good narrators. I' ve read everything Munro has written, and it seems her plots are in an Arbus-like downward spiral. These stories are grim and depressing. I thought of Flannery O'Connor, but those bizarre stories are cloaked in an amusing demented atmosphere and southern sensibility, and Munro's are addressed as plain reality. Murder, cancer, depravity, on and down. Not fun.

Strange collection, and one great story

I bought this one because the description (and the title story) is about a female mathematician's life - of great relevance to my own career. And, as it turns out, it is indeed a part biography of THE Sonia Kovalevskaya, who is well known in mathematics! Not a made-up story but a true story, that Alice Munro tells us, was inspired by her reading of "Little Sparrow".
I liked that part of the book and found it both engrossing, poignant, and moving. How times have changed (thank goodness!)
As for the rest of the collection in this book, I still have to think about what the author is trying to tell us. I "don't get it" yet. But it has gotten me thinking.
The performance is fine, but I don't like the distraction of switching between male and female voices. If the narrator is good enough, we should be carried along no matter what gender.

Alice Munro is a wonderful writer. Even though this is a collection of short stories the character development in each one is thorough. I read the first four of these stories. Each one was interesting to listen to - until the end. Each ending was such a disappointment (they just stop with no satisfying conclusion!) that I cannot bring myself to read the rest.

Would you listen to Too Much Happiness again? Why?

I love Alice Munro but as usual some of the stories are better than others - I mean they are all well written but sometimes the plot or subject have more appeal to me than others. My favorite and the most mesmerizing was the last story "Too Much Happiness" and it was based on a real person - a Russian mathematician. Completely engrossing. I could definitely listen to that one again.

What other book might you compare Too Much Happiness to and why?

Other Alice Munro collections - I have read many of them.

Have you listened to any of Kimberly Farr and Arthur Morey ’s other performances before? How does this one compare?

I was not crazy about the readers - I like books to be read, not acted. No one (well almost no one) can keep changing voices successfully. The type of reader I like is like Colin Firth or Jeremy Irons - they are believeable when reading both male and female voices. I think that is because they don't try too hard to change the pitch.

When listening to most of these stories, I vowed to read everything of Munro’s that I could find. Some of the time I lost the thread however. I will listen again for sure.

If you're an Alice Munro like I am, be aware that many of the stories in this collection, including the title story--Too Much Happiness--are part of Family Furnishings. I wish there'd been a list of the stories included before I bought this.

No one writes stories more eloquently honest than those of Alice Munro - stories full of surprises, yet inevitable, always moving, often wrenching . These two readers give the material its due. They don't intrude upon the stories asking that we admire their work as well as Ms. Munro's. I’ve previously read all of Alice Munro's work and I love being read to, so listening to this book was a treat.

Well written but all the stories are very gloomy, depressing and hopeless. The aftertaste from this book is deeply rooted depression that you don't even notice anymore because why bother. I get that the title of the book is supposed to be ironic, yet I still hold a resentment towards it because I didn't really know much about the author and her books and couldn't tell from the example piece how mentally heavy these stories would be.
Narration was good for the most part but not in the last story where the narrator tried to do Russian, German and other accents. It wasn't an even accent during the whole story but rather heavy Russian accent growing into subtle Russian /German, weird French. Just don't try doing any accents please.