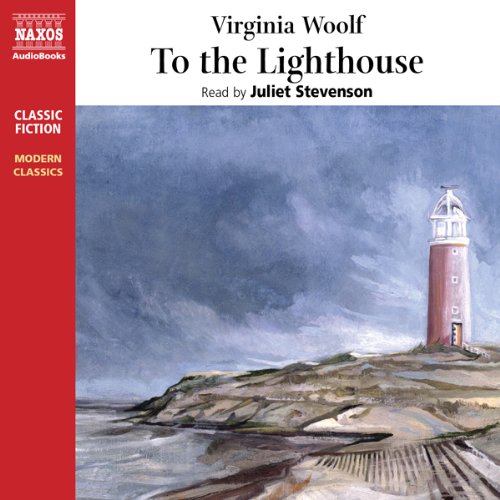 To the Lighthouse is a landmark work of English fiction. Virginia Woolf explores perception and meaning in some of the most beautiful prose ever written, minutely detailing the characters thoughts and impressions. This unabridged version is read by Juliet Stevenson.

"British actress Juliet Stevenson makes for a better reader of Woolf's words than Nicole Kidman's Oscar-winning turn as Woolf in The Hours...Her reading is quietly, carefully precise, and that precision is a solid complement to Woolf's own measured, inward-looking prose." (Publishers Weekly)

A Stark Tower on a Bare Rock, or a Hanging Garden?

On the surface not much happens in Virginia Woolf's semi-autobiographical modernist masterpiece To the Lighthouse (1929). In Part I: The Window, Mr. and Mrs. Ramsay (based on Woolf's own parents), their eight children, and several guests are vacationing at the Ramsays' summer house on the Isle of Skye in the early 20th century. Mrs. Ramsay, a meddling and kind fifty-year-old Greek-goddess, goes to town on errands, reads a fairy tale to her youngest child James, knits a stocking, presides over a dinner, communes without words with her husband, and holds the different people in the house together with the gravity of her charisma. Mr. Ramsay, an eccentric philosopher-academic, carries on with egotism, insecurity, and emotional tyranny. James' desire to visit the local lighthouse is thwarted by his father and the weather. Mr. Charles Tansley, an uptight disciple of Mr. Ramsay, asserts himself charmlessly. The somnolent and cat-eyed poet Mr. Carmichael reclines on the lawn. And independent, Chinese-eyed and pucker-faced Lily Briscoe works on a painting of Mrs. Ramsay and James and critically contemplates the family. In Part II: Time Passes, the forces of entropy besiege the house as it stands empty of people for ten years. And in Part III: The Lighthouse, Mr. Ramsay coerces his two youngest children--now moody teenagers—to accompany him to the lighthouse while Lily Briscoe--who partly represents Woolf herself as a writer--comes to terms with her feelings for Mrs. Ramsay as she tries to capture her vision in the painting she'd attempted ten years earlier.

Woolf is so good at sympathetically and honestly exposing people's minds and so good at revealing the beautiful and awful world we live in, and her writing is so beautiful, flowing, controlled, and poetic, that spending only a couple days with her characters is an indelibly rich experience. She employs a modernist stream of consciousness narration, and fluidly moves from one character to another. Her technique in the novel has been likened to that of the lighthouse beam moving across the benighted island world, briefly illuminating one mind and then another as it goes round, but Woolf's narration feels more organic than that. I relish her long, elegant sentences comprised of multiple clauses attached by semi-colons, her original and vivid metaphors, and her insights into human nature in a variety of vessels (male, female, old, young, educated, simple, etc.). I expected To the Lighthouse to be beautiful, philosophical, and sad, and it was, but I was surprised by its constant humor. At least as often as a poignant pang, I felt a flush of pleasure, similar to what Cam feels while sailing towards the lighthouse:

"From her hand, ice cold, held deep in the sea, there spurted up a fountain of joy at the change, at the escape, at the adventure (that she should be alive, that she should be there). And the drops falling from this sudden and unthinking fountain of joy fell here and there on the dark, the slumbrous shapes in her mind; shapes of a world not realised but turning in their darkness, catching here and there, a spark of light; Greece, Rome, Constantinople."

The dense novel explores the miraculous fragility and meaning (or lack thereof) of life; the varied and complex nature of love; the losses and gains involved in making families or living alone; the fraught relationships between children and parents; the confining roles of men and women; the surprising vividness and poignancy of memory; the complex nature of perception; the doomed but necessary attempt to understand other people; and the doomed but noble attempt through art to capture truth and to avoid entropy.

Juliet Stevenson was born to read Virginia Woolf! Her voice is lovely to listen to and full of understanding, irony, and sympathy, a perfect accompaniment to the text. With skillful subtlety, she modifies her voice for the thoughts of men and women and children and adults (and for the local Scottish workers who help the Ramsays). She carried me off To the Lighthouse. The only thing, perhaps, that is lost in the audiobook is Woolf's use of parentheses and brackets and semi-colons, which visually shape the reading of the text.

To the Lighthouse, like Mrs. Dalloway and Orlando, should be read by anyone interested in gender, art, love, life, modernism, beautiful prose, and early 20th century British culture.

Would you try another book from Virginia Woolf and/or Juliet Stevenson?

I seriously can't recommend Juliet Stevenson enough. This book was a difficult read, and I'm very sure if I had read it to myself I wouldn't have understood it nearly so well as having it read to me by JS. You won't regret the choice.

Juliet Stevenson's reading of this rich novel is perfection. Her "cello-mellow voice" (a phrase borrowed from another stream-of-consciosness novel, Patrick White's Eye of the Storm), creates a range of voices which enhance understanding and draws the listener in "truly, madly, deeply" (to borrow from my favorite Juiet Stevenson movie).

The events are simple: a family and their guests plan and cancel a trip to the lighthouse in the first half. A death of a major character takes place "off stage" and the changed family returns and completes the trip. An artist struggles in both halves to capture the fleeting life before her. "One wants 50 pairs of eyes," she thinks as she grasps at the rapid changes.

For those who love words, ideas and art, here is an audio book that can be enjoyed numerous times for, as one character comments on her surroundings: "One could let whatever one thought expand here like a leaf in water..."

The prose is lyrical, almost surreal, and places you directly in whatever character Woolf is voicing. I felt as though I were there, experiencing everything along with the characters. There is a clarity and immediacy to Woolf's writing, and I found it completely absorbing. Not a lot happens in this book; it is a portrait of a family, the individuals and their relationships. If you're looking for an exciting plot and action, this is not for you. We get to know these characters so intimately, and yet there is so much that we don't know about them and so much they don't know about each other. Their attempts to reach each other, with occasional success, are very moving. The book is like a very subtle but major earthquake, after which the reader looks at other people with new eyes and with more compassion.

Juliet Stevenson is just perfect. Not a wrong note in the book. She has a beautiful voice that is pure pleasure to listen to.

There is little plot to this story but Woolf's detailed description of the thoughts of the characters is amazing.and insightful.

To the Lighthouse is a brilliant but difficult book. It is often told in a "stream of consciousness" style. There is no narrator and little plot. Juliet Stevenson's energetic performance makes the novel is much easier to understand.

Juliet Stevenson does a wonderful job reading this story. She was great with Mrs. Dalloway and A Room Of One's Own as well. I would search her out specifically.

At this point, I would pay $17.95 to hear Juliet Stevenson read refrigerator installation manuals. To hear her read the rigorous rationality of Virginia Woolf, who so sadly left before saying all that we need to hear, is wonderful. Not the first Juliet Stevenson-read book to get, but you have to get them all, anyway, so....

Where does To the Lighthouse rank among all the audiobooks you’ve listened to so far?

The audio book is 6 hours of pure shimmering, insightful, delightful, mournful, intellectually stimulating, emotionally resonate literary perfection. In this slender volume, Woolf does what it took Thomas Mann over 500 pages of Magic Mountain and DH Lawrence two books (The Rainbow and Women in Love) to do - write an insightful meditation on the subjective nature of life, the transcendent power of art, the subtle, complex interrelations of personalities, and the existential change in perspective that occurred after WWI. Woolf is at her writing peak with prose that is perfected crafted, detailed but never forced and her words come alive with Juliet Stephenson crisp, English accent. She makes it feel like the characters are whispering to you, an effect very much in line with Wolf’s intent. I've read the book twice, and listening this third time was a joy. This is one of the great books of modern literature.

It's a great book, nothing to say about that... but if you're looking for action, look elsewhere. Here it's all about insight, the same scene narrated from more than one point of view - of course, the main character is Mrs. Ramsey (the one who keeps the others together), but the author shows the thoughts of the others, as well - especially how they see Mrs. Ramsey and each other...

This book is a pleasant stream of consciousness novel with little dialog or story. The characters are explored through their inner dialog and their perceptions of the environment, the other characters and, most importantly, themselves. There is a bit of (justifiable) feminist angst in the writing which I found a distraction weakening the work and distracting from the primary focus.

The narration was excellent, using delicate pacing and tone to express complex internal states. The narration switches between characters which was a bit difficult to follow at points.

I was surprised to see an attached PDF file. This has the CD liner notes, including a table of contents and a nice historical note by Roy McMillan.

Although I liked To the Lighthouse, I liked Proust and Joyce quite a bit better.