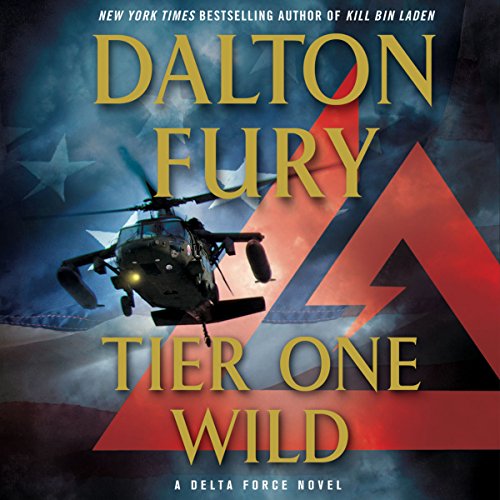 Former disgraced Delta Force commander Kolt "Racer" Raynor has earned his way back into The Unit after redeeming himself during an explosive operation at a black site in Pakistan. But he is about to face his deadliest challenge yet. The most wanted man in the world, American al Qaeda commander Daoud al Amriki, and his handpicked team of terrorist operatives, have acquired stores of Russian-built, shoulder-fired surface-to-air missiles (SAM's) from ex-Libyan spies in Cairo. Their mission: infiltrate the United States and take down American aircraft. The country's best are tasked with stopping them. But when a SEAL Team Six mission to take down al Amriki goes wrong, Major Raynor and his Delta Force team find themselves front and center as Amriki and his terrorists work their way closer to America. And time is running out.

Dramatic and revealing, Tier One Wild takes listeners on an international thrill ride from the black ops nerve center of JSOC to the bloody streets of Cairo in a story only a former Delta Force commander could tell.

The Book is very well written. The characters are interesting and well described. It's very informative about Special Forces. The narrator is perfect.

Let's not get ahead of ourselves people. That said - This was a perfect follow up... I enjoyed getting to know Kolt in Black site - But this may have been the better overall book. I won't go ino much detail. If you haven't read the first - then this is a perfect one-two combination. If you like these - Do yourself a favor and get Sniper Elite one way trip.

This is a great follow up to Black Site, the first Delta Force series book. Lots of action with a cool insight into the world of Delta Force. Ari Fliakos does a fantastic job of bringing the book to life! My only complaint, and the reason the story gets 4 Stars instead of 5, is that it seems to end very quickly with many coincidences and lots of just plain luck. But what do I know, maybe that's the way it works in the real world. Although it's not mandatory, I'd suggest reading Black Site first to get the most out of this story. I truly enjoyed the writing, thoroughly enjoyed the narration and I am definitely looking forward to the next book in the series!

A fantastic special ops thriller with plenty of believable suspense, action and excitement! A great story paired with excellent narration make this audiobook a real treat. Get it, you won't be disappointed! And who can resist a special ops story written by a real former special ops guy?!

I have read two of these books now and 95% of the books are great, but the endings are so abrupt and there is no wrap up of the story that it somewhat ruins the whole plot.

Awesome Edge of Your Seat Listen

Where does Tier One Wild rank among all the audiobooks you’ve listened to so far?

Tier One Wild ranks high in the books I've listened to of this genre. I would never have purchased a war novel in paperback. I'm glad that I gave one of them a try on audible because I've found them to be some of my favorite listens. I've learned facts about US history, some good and some not so good. I've been exposed to many different cultures worldwide. From the time our nation was born up to the present time there has always been watchful eyes on the world. Understanding how politics plays such a huge part in all of the conflicts has been made abundantly clear. A lot of the novels of this type that I've read are written as series, which I do enjoy. I have learned how the US does have to struggle to maintain democracy. I am still unable to wrap my mind around the fact that the US continues to provide support for those nations that detest us. My only conclusion is that the US, from its inception, has always helped those in need, with the full realization of what the consequences could be. The poor of our nation remain living in deplorable housing, there is never enough food to fill the mouths of our starving, those who are sick cannot receive the best of care from the medical community, the war tactics that we have taught to our enemies, when they were thought to be our allies, has come back to haunt is in the deadliest of ways. The weapons these countries use against us were supplied to other nations by the US who, now sell them for the highest price to those who want to destroy us. Although, a lot of what I've learned makes me angrier than I want to be, I do stand tall and salute the men and women of the UNITED STATES OF AMERICA who keep us safe and thank them everyday. I am proud to be an AMERICAN.

What was one of the most memorable moments of Tier One Wild?

One of the most memorable moments of Tier One Wild was when Raynor and TJ set out to hunt down and eliminate David Doyle, who as a traitor of the US. and a member of the Islamic Gahaid (sic). He had 4 SAMS, surface to air missles, of the 60 he had purchased illegally from a Libyan. He had already blown a US airliner out of the sky, with 247 passengers aboard. The other two men had missed their targets with 2 of them. The traitor had only had one left, his eyes bored into his target with hate, from the soil of his birth, the USA.

I liked Ari Fliakos's performance because his characterizations of all of the characters made for a great listen. He was able to change the timbre of any character's voice to express happiness, anger, hate, fear and so on. I was never in question of what the characters were feeling or who the character was.

This is the second book in the series and I'll keep my eye out for the next one. The book was an easy listen that went all too fast. While other books may drag, the action and suspense of Tier One Wile, keeps you riveted to your seat. It is a real page turner. When you purchase this book you will be glad that you did.

Nothing better than sequels

The first one was amazing, just as this one was. Picks up RIGHT where BLACK SITE left off and were once again with "Racer" on a world wide hunt.

Daoud al Amriki has gained access to 60 SAM's (surface to air missles:Russian IGLA-S systems to be precise) that have been stolen, sold and smuggled to end up being the hopeful cause for and american infrastructure terrorist attack.

Dalton Fury never ceases to amaze in the second of the delta force novels giving a brief-and very detailed-summary of people, weapons, places, organizations and many others throughout the novel

With action and suspence happening almost every chapter and Ari Fliakos in your earbuds, your in for one wild ride as Kolt Raynor is in a life and death race to catch up with the infamous David to foil his plans and save not only the "POTUS" but also America.

The endings are abrupt yet feel incomplete.

Good story, characters introduced in a sufficient manner, and the reader appears knowledgeable and interested in his subject. Accurate, believable, and a tight approximation on reality makes this a worthy listen. But, the endings. They appear as quickly as a tornado and then proceed to blow right through the climax. I would preach that as an after action report is necessary for Delta it should also be front and center for your readers. We all look forward to the next book but should not have to be multi chapters in to the next book to discover what happen after the terrorist died, what interactions would our hero have with law enforcement and then the return to base for the recognition that he surely deserves. Don’t be stingy in your summation, bring your reader into the arena that indentifies who goes where and when and what happens to the players that have spent so much time in our collective psyche.

Wish it was longer!

Not long enough. But a fine presentation. Best moment was when Doyle got shot twice before the final round.

Dalton Fury is such a great story teller. He is able to convey what is going on and keep it simple enough so people (me) can understand the different aspects of military operations...and make it an excellent story.
Ari Fliakos is such a great narrator. I really hope he does more work. Narrators can make or break a book and he definitely made this book even better...if that's possible!
You can always tell a great narrator when you don't think about the way they are making the opposite sex sound when they are reading that part....he is one of them.