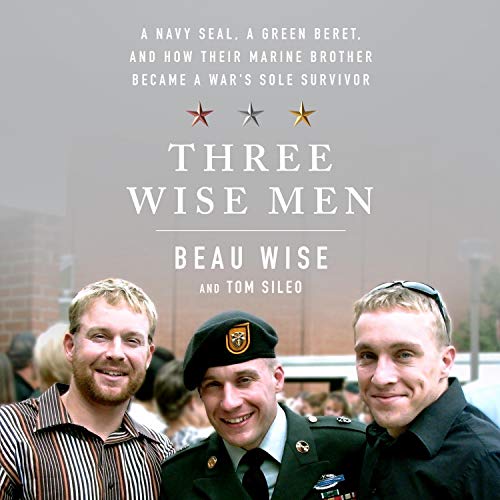 This program includes a preface and afterword read by Beau Wise.

From Beau Wise and Tom Sileo comes Three Wise Men, an incredible memoir of family, service, and sacrifice by a marine who lost both his brothers in combat - becoming the only "sole survivor" during the war in Afghanistan.

Shortly after the 9/11 attacks, three brothers by blood became brothers in arms when each volunteered to defend their country. No military family has sacrificed more during the ensuing war, which has become the longest ever fought by America’s armed forces.

While serving in Afghanistan, US Navy SEAL veteran and CIA contractor Jeremy Wise was killed in an al Qaeda suicide bombing that devastated the US intelligence community. Less than three years later, US Army Green Beret sniper Ben Wise was fatally wounded after volunteering for a dangerous assignment during a firefight with the Taliban. Ben was posthumously awarded the Silver Star, while Jeremy received the Intelligence Star - one of the rarest awards bestowed by the US government - and also a star on the CIA’s Memorial Wall.

United States Marine Corps combat veteran Beau Wise is the only known American service member to be pulled from the battlefield after losing two brothers in Afghanistan. Told in Beau’s voice, Three Wise Men is an American family’s historic true story of service and sacrifice.

"Many American families have sacrificed much for our freedom, but few if any in modern times have given as much as the Wise family from my home state of Arkansas. Theirs is the story of true heroes - those who gave their lives as well as those who remain to carry on and honor the memory of Jeremy and Ben. It’s a story that needs to be told and more importantly, needs to be read and shared. It will remind you that America is a great country because of great, God-fearing people who pay a price for all of us." (Mike Huckabee, 44th governor of Arkansas)

I was so deeply moved by this heart wrenching, authentic story of faith family and raw patriotism.

It should be required reading for Every student, protestor and politician

This is a book of phenomenal and epic proportions. A true story about integrity, courage, and devotion to country and family: the unbelievable aspect is it's not just about just one family member but THREE. Three BROTHERS, each of whom gave their lives to serve. They not only did their country; two of them gave their lives literally to protect and save others on the battlefield. Never Ever Forget the WISE BROTHERS! Every single U.S. AMERICAN, or lover of the free world; SHOULD KNOW THE WISE BROTHERS, and This is an Unbelievable, very important story that we all need to take pause and give respect to.

You will laugh and you WILL cry.

Of the hundreds of books I have either read or listened to, this is the first book to make me cry. Others have made me tear up, but this book made them flow. The last sentence of the book, read by the author himself, has so much power and humility.

As the oldest brother of 5 and fellow servicemen I can really see the power of every single word spoken. This book should be read by all services and people of faith. Loved the book by far one of the best.

Very sad but up lifting at the same time. Hard to put down. Amen to you all!

This book is honest , full of military knowledge , courage and dedication from the characters in order to achieve their military career goals.
It reflects the human side of brothers.
But to the living Mr.Wise, how much more could his parents offer to this country in behalf of justice and peace ?
He wanted to fight and make a bigger mark in the world, which I think he already did...but feeling left out with all my respect I don't think is the right emotion. His two brothers made the ultimate sacrifice and third one is not conceivable. Revenge is an act for God as He said Revenge is mine .
This is a good book!

Thank you. A story all people need to here.

The live of you and your family is a true tribute to love and honor of both god and country. I can not say how much this book touched my heart.

You will not destroy me

Tragic story but worth shedding tears

Knowing the subject matter I knew I was in to read a story of fallen soldiers. Those story was recommended by one of the authors fellow brother's in arms. 8 looked forward to maybe hearing some things I didn't know. I found a story of such commitment to serve and put others before themselves. It impacted me more than I thought and I am forever grateful to know if these fine Wise men.

This book was the first book I've ever pre-ordered. The excitement I had built up to release day was an understatement. The book is written very well and I found myself feeling like I was there. Very touching tribute to some outstanding warriors! God Bless the Wise family.