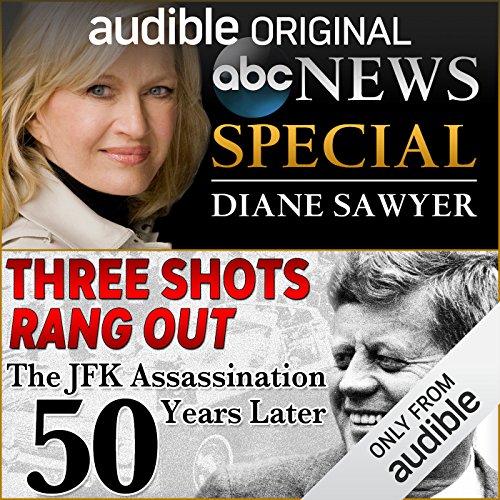 A vivid recreation of the moments before, during, and after president John F. Kennedy's assassination, based on original audio from ABC interwoven with commentary from Diane Sawyer and fresh interviews with the reporters, secret service agents, and medical personnel who were there. It's harrowing to hear the first breathless reports of the shooting, as well as the somber accounts from Kennedy's funeral, and the little details bring the terrible events back to life. Although the sound quality here is reliably excellent, there's a certain amount of repetition in the material that perhaps makes it best suited to JFK obsessives or those looking for thorough teaching tools.

This edition of Three Shots Rang Out: The JFK Assassination 50 Years Later is an audio-only ABC News special created exclusively for Audible and hosted by ABC World News Anchor Diane Sawyer. Sawyer takes listeners back to Dealey Plaza in Dallas, Texas, on November 22, 1963, for a “you are there” exploration of the day of U.S. President John F. Kennedy’s assassination. Key moments include:

These real time audio reports, eyewitness recollections from 1963, and new analysis make for a powerful experience of this fateful day in recent history.

A good job by the author.... very nicely narrated and good contribution indeed ... thanks for this creation....!!!!!!!

Would you listen to Free: Three Shots Rang Out - The JFK Assassination 50 Years Later again? Why?

Yes. I could listen to this over and over. It brought me back to that weekend in 1963. I cried then and this story brought it all back again. I have watched many tellings of this on TV over the years but this was the most compelling report ever. I felt the emotions all over again. Kudos to ABC. Absolutely outstanding.

The voices throughout - from 1963 and from today. It just hit a nerve all the way through.

Have you listened to any of Diane Sawyer’s other performances before? How does this one compare?

Yes. She is amazing. But the JFK assassination changed history and changed our lives - mine for sure.

If you could give Free: Three Shots Rang Out - The JFK Assassination 50 Years Later a new subtitle, what would it be?

I wouldn't change anything.

What a great listen! Hear history as it happened!

Would you listen to Free: Three Shots Rang Out - The JFK Assassination 50 Years Later again? Why?

This is the definitive audio history of the Kennedy assassination as it happened, with gripping material from the ABC archives, along with powerful interviews with an ER doctor who attended to the president and a radio reporter who saw Oswald at the scene of the crime. You won't be able to find this stuff anywhere else. I intend to keep this recording for years to come.

Some of this stuff exists on youtube, but far more original ABC Radio material is here in full context. It is a treasure trove for Kennedy history buffs, more powerful to listen to than to watch.

The interview with the ER doctor was particularly gripping. Don't miss it.

This was a very short recap of what happened on that dreadful day. I loved the original footage of the news agencies they incorporated into the recap. Definitely worth the time to listen too.

Hearing the reports from 50 years ago, you felt like you were right there living it. It affects you as though you are hearing the events unfold live even though you know the history. I've read numerous accounts of this time in history, but hearing it as it unfolded 50 years ago gave me a completely different perspective on it. This is totally worth a listen! I'm not even a history buff and am looking forward to listening to it again.

Excellent review of the Kennedy assassination with the actual ABC radio broadcasts of the time. Narrated professionally by Diane Sawyer. You really get the feeling of "being there". I especially liked the comments of Ike Pappas during the shooting of Lee Harvey Oswald by "an elderly man" (Ruby). He exclaims: "Holy Mackerel!" Other highlights are the interview with the surgeon in charge of trying to save JFK, the interview with Officer Tippet's wife, and the closing interview with Larry Sabato, author of the recent "The Kennedy Half Century". Thank you Audible and ABC for this free program! It brought back all the memories of that awful time.

Where does Free: Three Shots Rang Out - The JFK Assassination 50 Years Later rank among all the audiobooks you’ve listened to so far?

It's in a class all of it's own because I'm not used to having a News Special. I love abc and Diane Sawyer so I would definitely purchase any future performances by her.

JFK & Jackie. They were so REAL. Not like these characters we get on Washington Hill now days!

Which character – as performed by Diane Sawyer – was your favorite?

the anchor who covered JFK's funeral, as the 21-gun-salute was being carried out he commented about the sound echoing off the same hills that witnessed his fore-fathers being buried here before him...it was such a fitting tribute! Very moving!

Please have Diane Sawyer back for more Audible exclusives! She is an amazing woman and reports with such passion! She could do a report on the alphabet and move me to tears!

What did you love best about Free: Three Shots Rang Out - The JFK Assassination 50 Years Later?

This was a great collection of interviews and stories. I had not heard of some of them. Darren did a great job connecting the whole story.

This audiobook comes to us free from Audible,com and ABC News and Diane Sawyer. My thanks go out to both organizations.

This two hour audiobook is a return to November 1963 where the Kennedy Assassination, Oswald arrest and subsequent murder, and the presidential funeral are retold using ABC radio accounts of the day.

P.S. I cant believe its been 50 years. Im getting old

Where were you when Kennedy was shot?

About ten years ago, I was shocked when my now-teenager asked me, "Where we you when President Kennedy was killed?" I told him I was born after that, but I was sure his grandparents would remember. They do, of course - but even 50 years later, it's hard for them to talk about that day. My mother's eyes become unfocused, and she talks about the apartment she and my Dad lived in, and going to watch the news on the neighbors' black and white television. My Dad mumbles, talks about hearing the news at his first job after college, and looks at the floor.

"Three Shots Rang Out: The JFK Assassination 50 Years Later" (2013) is an ABC News Special by Diane Sawyer. Sawyer narrates a collection of radio stories and interviews, along with audio clips from television broadcasts made immediately after John F. Kennedy was shot on November 22, 1963. "Three Shots" follows the story as reporters did, from Dealey Plaza to Kennedy's burial at Arlington National Cemetery.

The Audible version includes reporter interviews of witnesses made right after the assassination that have never been rebroadcast, which are fascinating today. The interviewees are calm, sound and relate what they saw, without speculation. That's a real contrast to today's requisite "How did it make you feel?" end-of-interview question. I do remember 9-11 quite vividly of course, and the news, and I always felt like saying "Why are you asking that question? How does it help the story? Do you think you'll get an answer other than an eloquent version of scared and devastated, followed by tears?"

Sawyer's piece also has interviews with the reporters, describing in more detail the various locations where the events happened. I was pretty startled to hear a thorough description of the Dallas Police Office basement, followed by audio of Jack Ruby shooting Lee Harvey Oswald. I realized that the screams I heard were Oswald's. Millions of radio listeners must have heard the same thing 50 years ago.

It's a very good listen. If my future grandchildren ask me the same JFK question, I'll tell them to listen to this story.

I was in eighth grade when JFK was assassinated. 9/11 and the moon walk are the only other times in my life when everyone was glued to the news. The school was sent home, as many were screaming in panic, absolutely sure Russia would attack. I found myself tearing up several times, heart sinking, during this recounting. It’s just as tragic and immediate now as it was then. I don’t think we’ll ever know the entire truth, about Oswald or Ruby.

Well made and very interesting

It was very interesting to hear the old recordings never before publicized. The narration was excellent.