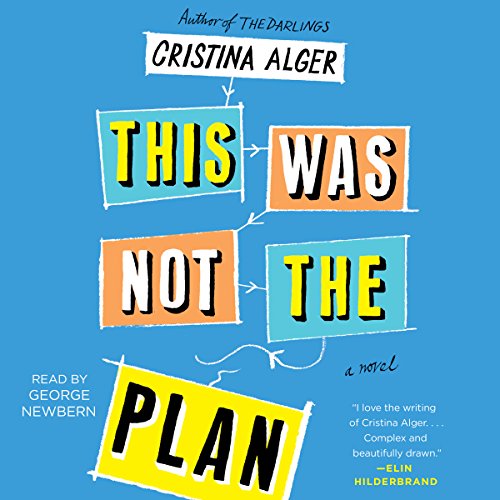 This Was Not the Plan

From the acclaimed author of The Darlings comes an incisive, hilarious, and tender exploration of fatherhood, love, and family life through the story of a widower who has to become the father he didn't know he could be.

Charlie Goldwyn's life hasn't exactly gone according to plan. A widower at 34, he is left trying to raise a quirky five-year-old, Caleb, whose obsession with natural disasters and penchant for girls' clothing have made him a loner at his preschool. The only thing Charlie does have going for him is his job at a prestigious law firm where - after 10 long years of 12-hour days and working through weekends and a huge win on a settlement - he is finally a rising star on his way to becoming a partner.

But after a Jerry Maguire moment at an office party, Charlie finds himself humiliatingly unemployed and stuck at home with Caleb for the summer as he desperately tries to win his job back. When a wedding forces Charlie to spend time with his own father - whom he hasn't spoken to in 35 years - he begins to realize that there's more to fatherhood than being able to provide financially for his son and vows to become the father he never had - and the father he never thought he was capable of being.

An intimate, accessible, and ultimately moving novel, This Was Not the Plan is a touching story about loss and love, parenthood and friendship, and what true work-life balance means.

Ce que les auditeurs disent de This Was Not the Plan

Looking for a story with an uplifting ending ? Here it is. A very pleasant story, a bit " too good to be true", but well written and well narrated. A good choice when looking for something that doesn't have too much tragedy and angst. Enjoy !

Would you try another book from Cristina Alger and/or George Newbern?

I wasn't totally crazy about Newbern's child voices, but he was a strong enough voice actor I'd certainly give him another try. Alger I'm less sure about.

Was This Was Not the Plan worth the listening time?

Borderline. It had entertaining moments, but the emotional core just never clicked for me. The main character's emotions (be it grief, anger, lust, etc) just never felt real to me, nor did any of the other characters ever really become vivid. Instead they seemed to fall into 'types': the perfect deceased wife, the perfect new girlfriend, the goofy/perfect best friend, the flighty/perfect sister, the estranged (but secretly perfect!) father... Not terribly nuanced or complex. That's not the end of the world, but it's also not very interesting to me.

This is nitpicky, but there were a few plot points that just didn't hang together that bothered me. 1) The main character's wife dies in a plan crash because of a drunk pilot, and he's a high powered corporate attorney. How is it that he doesn't start this book with a giant settlement at his disposal? It makes no sense. 2) (SPOILER) The author tries to have her cake and eat it to, by having the deceased mother and his estranged father both be the good guys. Key to this is us accepting that the mother turned down crucial money for her children for no good reason, including money for the main character to go to college. The selfishness and weirdness of this choice is never addressed, nor are any of the shades of grey in the situation explored. This felt unsatisfying and like the writer was trying too hard to have everyone be 'good' at the expense of exploring her own storyline.

A very enjoyable read full of drama and conflicts

Twins Zadie and Jeff live together and follow very different paths but depend on each other. Sadie cares for her nephew Caleb while her widowed brother spends an inordinate amount of time at his New York law firm. He couldn’t manage raising his five-year son without Zadie. A crisis brings about change and growth for both of them. Jeff gets fired and Zadie gets engaged. As a single father Jeff becomes much closer to his son and reunites with his estranged father.
The author avoids clichés and her story flows effortlessly. This is the third book I have read. Ms Alger is quite talented. Her books are original and well written. I recommend this book

This has been my favorite narrator performance out of all the audiobooks I've listened to thus far (and that is quite a few.) Great story, great performance- very simple yet entertaining.

A light respite with good pacing and likable characters. Thought the relationship between the estranged father and son was very unrealistic. And, the ending of the book was quite weak.

I kept waiting for something interesting to happen in this book. Very hum drum. The narrators voice is very commercial and uninspiring, and not believable not authentic. And a very light almost-comedy. I did chuckle once, I will admit. I really disliked the voice alterations that the narrator made for the other characters.

What made the experience of listening to This Was Not the Plan the most enjoyable?

I thought the narrator was spot on and sounded like a real person I might know, not an actor.

I thought it presented the characters in a realistic manner, with both their strengths and their flaws. I thought it was heartwarming, even though much of it was quite sad. It made me cry in parts and smile in others.

This would be a great movie.