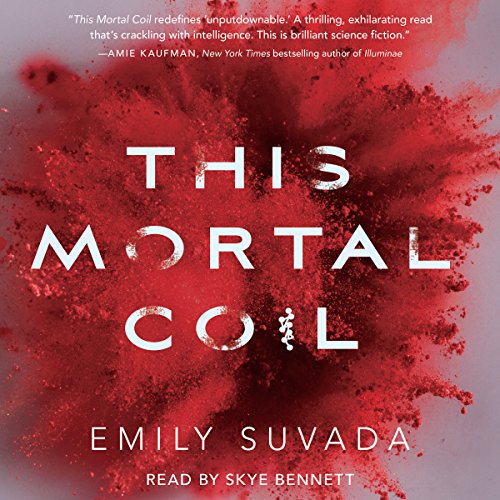 In this gripping debut novel, 17-year-old Cat must use her gene-hacking skills to decode her late father's message concealing a vaccine to a horrifying plague.

Catarina Agatta is a hacker. She can cripple mainframes and crash through firewalls, but that's not what makes her special. In Cat's world, people are implanted with technology to recode their DNA, allowing them to change their bodies in any way they want. And Cat happens to be a gene-hacking genius.

That's no surprise, since Cat's father is Dr. Lachlan Agatta, a legendary geneticist who may be the last hope for defeating a plague that has brought humanity to the brink of extinction. But during the outbreak, Lachlan was kidnapped by a shadowy organization called Cartaxus, leaving Cat to survive the last two years on her own.

When a Cartaxus soldier, Cole, arrives with news that her father has been killed, Cat's instincts tell her it's just another Cartaxus lie. But Cole also brings a message: Before Lachlan died, he managed to create a vaccine, and Cole needs Cat's help to release it and save the human race.

Now Cat must decide whom she can trust: The soldier with secrets of his own? The father who made her promise to hide from Cartaxus at all costs? In a world where nature itself can be rewritten, how much can she even trust herself?

After 2.5 hours of listening, I don't know if I can finish. I don't blame the narrator completely. Why didn't the editor notice the multiple mispronunciations? I am a high school media specialist, so I can live with the unnecessarily over-emphasized narration, but the frequent mispronunciations are like nails on a chalkboard. Ugh.

Whoever this narrator is she is terrible. She sounds like a Kardashian want to be in uses slang mashups constantly throughout the entirety. One of the first audiobook I have ever bought.

The narrarator is awful. She whispers some words and yells others, which makes me constantly have to adjust the volume, rendering this book a miserable listening experience, particularly while in the car. It's fine if you are in a quiet room and can keep the volume low enough to hear the whispers and not be deafened by the yells. I'm not sure I will finish it, even though I love the story. In addition to poor volume regulation, the narrarator also mispronounces several words repeatedly, which is difficult to listen to without be distracted by it.

Fix all of humanity’s instincts??

I was really digging the book until the ending. The premise of all the gene editing is cool but to have the whole book to be about eliminating humanity violent instincts so that we “evolve” more is so unrealistic and ridiculous. Ruined the whole thing.

If I Wasn't Me I Would Love This Book

The writing was good. The author definitely knows how to use her words. The narration wasn't bad. I'm not sitting around wondering how Skye Bennett expects to make a living as a voice actress. Still I couldn't make it past the first hour. All I could think was something about this reminds me of the 5th Wave and Maze Runner. Two book series I despised despite my son and niece declaring them the best series ever. So if you loved either of those you should seriously try this series. Me? I'm not going down that road again. But I will be telling my son and niece about it.

I good literally not put it down! This book so filled with so many twists, I was guessing the entire time. The characters were deep and the plot was clever. This story has been done before, but the author created it into something uniquely her own. I can’t wait for the next book!!

Suvada crafts a suspenseful story that will keep readers listen/turning pages. While not way out there on the sci-fi side of things, it is enough to give readers pause as to what scientific and technological advances will mean in the hands of the power hungry. The struggle of good vs. evil has a Hunger Games-like feel to it with younger heroine fighting a corrupt adult world.

I absolutely love this book! this was one of my favorites. performance could be better

This is a great story, in hindsight...

I really found this story to be refreshing. It is different from the science fiction stories I’ve been reading lately. The story has many twists at the end that i did not predict. I commend the author for her writing. This novel is about 10% Y.A. hormone feelings. It threw me off but i got used to it. I listened to this book mostly at 1.5x if that’s relevant to you. The narrator has a vocal fry that i loathed for the first hour or so.

Just hang in there

The narrator is hard to listen to at first but it gets better. The concept of the story is so original and interesting. It can be hard to follow at times but it will eventually all come together. There were a couple of interesting twists and the book finished on a satisfying note. I’m looking forward to the sequel.

Sometimes a bit too cheesy but overall a great story, just the reader's voice gets really overdramatic and annoying at times, like a suburban kid voicing a character that's been through some terrible experiences, not even close to what a hardened person would sound like.