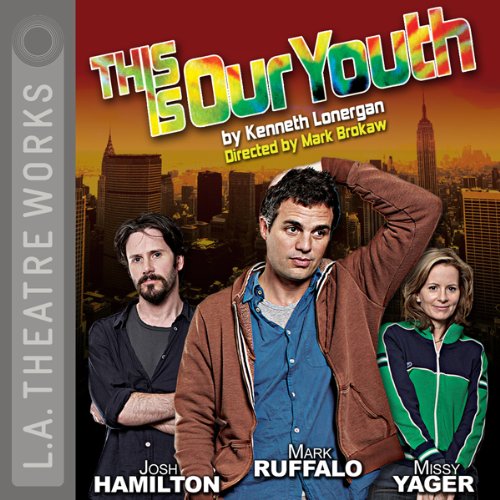 This Is Our Youth

American playwright Kenneth Lonergan’s 1996 play This Is Our Youth is an exuberant portrait of disaffected young people during the Reagan Era. In 1982, teenager Warren Straub steals $15,000 from his abusive father and goes to the Upper West Side apartment of his friend Dennis Ziegler. They smoke pot, plot how to spend the money, and are joined by their friend Jessica Goldman. Actors Mark Ruffalo, Missy Yager, and Josh Hamilton give arresting performances in this recording of a live theater production.

Starring Mark Ruffalo, Josh Hamilton and Missy Yager, the original cast was reunited for this exclusive L.A. Theatre Works performance of This is Our Youth. In 1982, on Manhattan's Upper West Side, three pot-smoking teenagers are resoundingly rejecting the 1960's ideals of their affluent parents. In hilarious and bittersweet detail, This is Our Youth follows 48 turbulent hours in the lives of three very lost souls at the dawn of the Reagan Era.
©2009 L.A. Theatre Works (P)2009 L.A. Theatre Works
Drames et pièces de théâtre États-Unis
Afficher plus Afficher moins

Ce que les auditeurs disent de This Is Our Youth

Great cast (particularly of note is a young Mark Ruffalo) and phenomenal writing. An LA Theatre Works classic, and a must for any modern drama fanatic.

I love this play

I love this play. A theatre company around me did this within the past few years. I saw it and I was wonderful. I just wanted to hear this version. it was very good.