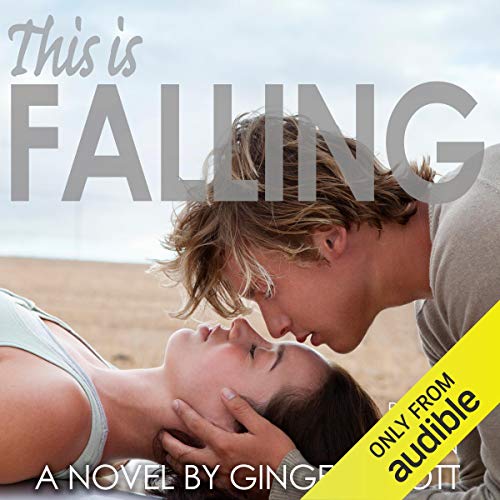 First, I had to remember how to breathe. Then, I had to learn how to survive. Two years, three months and 16 days had passed since I was the Rowe Stanton from before, since tragedy stole my youth and my heart went along with it.

When I left for college, I put 1,000 miles between my future and my past. I'd made a choice - I was going to cross back to the other side, to live with the living. I just didn't know how.

And then I met Nate Preeter.

My heart was dead, and I was never supposed to belong to anyone. But Nate Preeter had me feeling, and he made me want to be his. He showed me everything I was missing.

And then he showed me how to fall.

This is a great story about a young girl (Rowe Stanton) who survives a school shooting that takes her best friend and her boyfriend. After two years of hiding from the world she heads to college where she meets baseball star Nate Preeter and begins to resurrect her life. For the first few hours of this audiobook I was totally expecting to be granting a five star rating to this one. Then there were a few scenes featuring Rowe McHypocrite and at that point there was a great deal of teeth grinding, then fast forwarding going on. She throws what we in the mountains call a hissy fit and Nate the whipped pup accepts it all. Which brings me to a point that I just have to make; why is it that all female romance writers make the male leads of these books into wimps or women?
I am more into women than men, but when I'm with a man, I want a man. The frame of reference this author uses seems to be that the guy is always at fault. Then in the last 10 to15% percent of the story Rowe has reason to be upset but then she becomes Whiny Girl for way too long. I can and do understand that PTSD deeply affects people but Rowe's actions don't seem consistent with the diagnosis. Given those weaknesses I still like this book enough to give it four big stars.

Young love with grown up hurdles. A nice Sunday afternoon listen. Not sure if I'm in for the series, but enjoyed this one.

This story was a little too young for me. I think it was very sweet/cute and would appeal to a younger audience. The narration was fine, although I did not care for the female performance of a male voice. This story is a story of a young woman who survived a brutal experience and began a healing journey with the hero. Sale worthy .... I used a credit and didn't return it.

Good, but not great!

I felt the story was really sweet and worth reading!
Rowe's sad story was just too annoying around the end. I'm glad the story had a happy ending.

I couldn't stop listening! The book was very well written and read very well too. I can't wait to fill my library with all of Ginger Scott's books!

not my cup of tea

it was a good storyline but not very well developed. i thought it was interesting the idea of writing a version of what might happen to victims of school shootings, it is a terrible reality of our country and after all the media buzz right after, we dont really know what happens to the survivors, how they deal with their losses and trauma.
however, the writing is quite amateur, to me it seems more like high schooler behavior/dialogue than college kids. i just didnt connect with the characters, and i dont think they were well developed.
the narrator was so so, kind of made some of the dialogue sound forced and fake... maybe it was the combination of the narrative and the amateur writing... but not my cup of tea.

I do not regret listening to this book, but it definitely wasn't one of my favorites. I usually listen or read books for young adults, but this seemed too juvenile for me. The issues in the relationship and how the characters dealt with them seemed so immature to me; so it was somewhat annoying to listen to.

Do you think This Is Falling needs a follow-up book? Why or why not?

I wouldn't be interested in a follow up book. It ends on a fine note, and I wouldn't know where else it would go.

this was such a beautiful story, and so refreshing to have a male character be a genuine nice guy too.

Ginger Scott is a fave!

This was my first audible and I loved it. It is wonderful to hear the stories come to life

Rowe has survived a tragic event but she is not living she is merely taking life one step at a time. She starts college and everything changes. She finds friends and meets a man. She must fight for the life she should be living and face what is going on back home without losing herself again. A very emotional story.