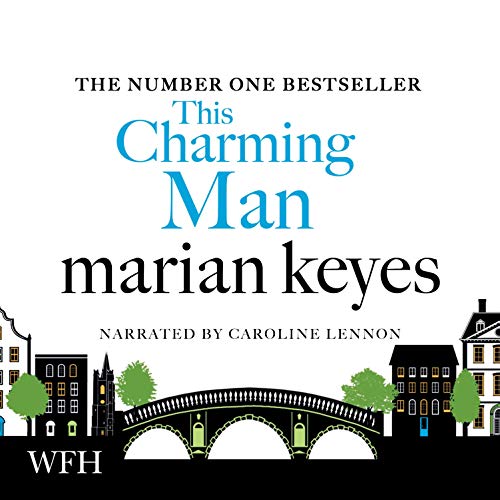 Lola has every reason to be interested in who Paddy de Courcy is marrying - because although she's his girlfriend, she definitely isn't the bride. Heartbroken, she flees the city for a cottage by the sea. But will her retreat prove as idyllic as she hopes?

Not if journalist Grace has anything to do with it. Grace knew Paddy a long time ago. But why can't she forget him? Grace's sister, Marnie, might have the answer but she also has issues with the past. Her family is wonderful but they can't take away memories of her first love: a certain Paddy de Courcy. What will it take for Marnie to be able to move on?

And what of the future Mrs de Courcy? Alicia is determined to be the perfect politician's wife. But does she know the real Paddy de Courcy?

Four very different women. One awfully charming man. And the dark secret that binds them all....

Absolutely amazing stuff. I could hardly believe how much I enjoyed this book. The narration was lively and enjoyable (adorable accents) and the story itself was brilliant. I really do enjoy Marian Keyes' portrayal of strong, smart and yet flawed women. I think that much of her brilliance lies in her ability to pull her reader in with humour, and then deliver her sucker punch. I also liked that it was a big fat long unabridged book - totally creditworthy! :)

Yes - I loved the characters and story

What was one of the most memorable moments of This Charming Man?

When Chloe turned up on Lola's doorstep

What does Caroline Lennon bring to the story that you wouldn’t experience if you just read the book?

I love Caroline's delivery - she brings the quirkiness to light and is able to really bring the characters to life.

Who was the most memorable character of This Charming Man and why?

I don't normally read a book twice but I would listen to this one!

I liked all the characters! They were all different and had their own really interesting personalities.

A must to read

This was one of her best books. It took me a couple of chapters to get into it, but once I did I couldn’t put it down. I highly recommend this book.
Excellent narration also.

Thought that the story came,together well. Especially enjoyed Lola and her journey. Think the author was insightful into addiction and domestic violence. Funny but poignant.

The narrator really brings the story to life, she is great.

What was one of the most memorable moments of This Charming Man?

There are many 'laugh out loud' moments that I really enjoyed, also many moments of discomfort as more difficult subjects are discussed. The narrator did a great job of them all.

Lots of the scenes that Lola is in. I like, "He's got his own look, and he's working it". Also loved Grace.

If you could rename This Charming Man, what would you call it?

Please give me a reason to keep reading this!

Would you try another book from Marian Keyes and/or Caroline Lennon?

I am only a few hours into Lola's story, and I can't take it anymore! Love the way it is versed, and the narrator is fantastic, but I can't stomach one more screw-up by the character. Flawed is one thing, but predictable mishaps are another - and no pride at all! No male character would ever be written this way.Please, if it gets better, let me know!!! I have over 20 hours left on this book.

This book is a great listen. The writing really gets you involved in the characters, and leaves you wanting more. Marian takes you into some serious issues while keeping it light enough to not dishearten the reader. Fantastic!

This is the second and last book I will read by Marion Keyes. Where does she find such stupid dopey women. Or is it because they are irish????? Recommended for people with no brain.

What could Marian Keyes have done to make this a more enjoyable book for you?

What does Caroline Lennon bring to the story that you wouldn’t experience if you just read the book?

Excellent reading of a dreadful book

If you could play editor, what scene or scenes would you have cut from This Charming Man?

Hard to get into

What would have made This Charming Man better?

The story lost me after chapter one.

What was most disappointing about Marian Keyes’s story?

Seemed all over the place listened to,three chapters and gave up.

Narration not the best

Her books generally read better, but this one did not translate to audible at all. Quite a disappointment to say the least.

I loved the story and I loved the speaker. This is a very enjoyable story narrated through several main characters in their own way, each of them having, of course, their own life. I just could not stop listening...