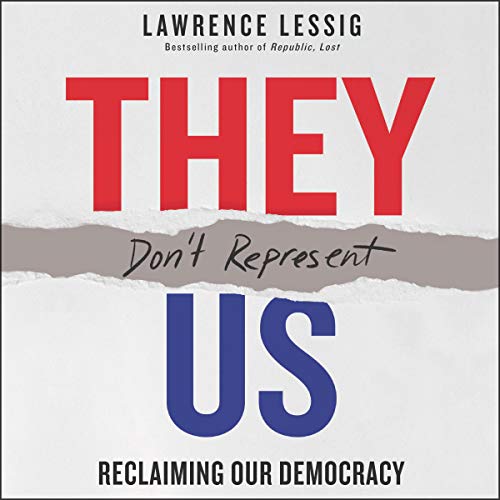 They Don't Represent Us

“This urgent book offers not only a clear-eyed explanation of the forces that broke our politics, but a thoughtful and, yes, patriotic vision of how we create a government that’s truly by and for the people.” (DAVID DALEY, best-selling author of Ratf**ked and Unrigged)

In the vein of On Tyranny and How Democracies Die, the best-selling author of Republic, Lost argues with insight and urgency that our democracy no longer represents us and shows that reform is both necessary and possible.

America’s democracy is in crisis. Along many dimensions, a single flaw - unrepresentativeness - has detached our government from the people. And as a people, our fractured partisanship and ignorance on critical issues drive our leaders to stake out ever more extreme positions.

In They Don’t Represent Us, Harvard law professor Lawrence Lessig charts the way in which the fundamental institutions of our democracy, including our media, respond to narrow interests rather than to the needs and wishes of the nation’s citizenry. But the blame does not only lie with “them” - Washington’s politicians and power brokers, Lessig argues. The problem is also “us.” “We the people” are increasingly uninformed about the issues, while ubiquitous political polling exacerbates the problem, reflecting and normalizing our ignorance and feeding it back into the system as representative of our will.

What we need, Lessig contends, is a series of reforms, from governmental institutions to the public itself, including:

A soul-searching and incisive examination of our failing political culture, this nonpartisan call to arms speaks to every citizen, offering a far-reaching platform for reform that could save our democracy and make it work for all of us.

All Americans should read/listen to this.

Whether you have far right or far left political view or somewhere in the middle. We are all mis-represented with the US political system.

a guide to the perplexed.

a detailed analysis of the many obstacles that prevent us from achieving a truly representative government.

A Powerful Call To Action

In clear, compelling terms, Professor Lessig explains what ails our republic and how we can not only keep it but make it better than ever before.

this is a good book and many of its reforms should be considered.

in some ways this book seems hyperfocused and in some ways it seems a little stretched. I appreciated the critique of polls as not representing who we are at our best, and how They should be supplemented by deliberative polls and sortitioned citizen assemblies.

this author makes clear they partisan position, but works very hard to be fair to the other side and propose a myriad of solutions that would strike reform balance.

they speak namely with ideals of (small r) republicanism, and mischaracterize how representative republics before our own ever were. Rome being a prime example, only the few were citizens when the masses were slaves. I appreciate the attempt to reconcile the intentions of various framers of our constitution and those people who framed its various amendments.

sometimes, their ideals of small r republicanism can read as elitist, but they counter that notion with the principle of one person one vote, and present many complex solutions to bridge that divide. nearing the end, they do begin to challenge how political elites unfairly treat voters and citizens as uninformed.

I'm not sure the parts of this book that focus on social media feel coherent with the rest of the narrative, but the points made are valuable nonetheless. it does however make this book feel very 2019, from hindsight up here in 2020.

this is a good book and many of its reforms should be considered.

Best of its genre.

I rarely write reviews, but I’m compelled to let as many as I can know that this book by a first-class mind is sure to enlighten anyone concerned about the state of America’s ability to govern itself. The book is nuanced, fair, and deeply insightful. Lessig outlines what is causing the lack of representation at the federal level, and what could be done about it. I don’t usually agree with everything a non-fiction author has to say (the last time was E.O. Wilson’s Consilience), but I did here—even when it didn’t entirely comport with what my tribe might like. I learned an awful lot from Lessig. He’s a great teacher and reads the book himself. Don’t pass up a golden opportunity to expand your understanding of an important topic in the most pleasant way.