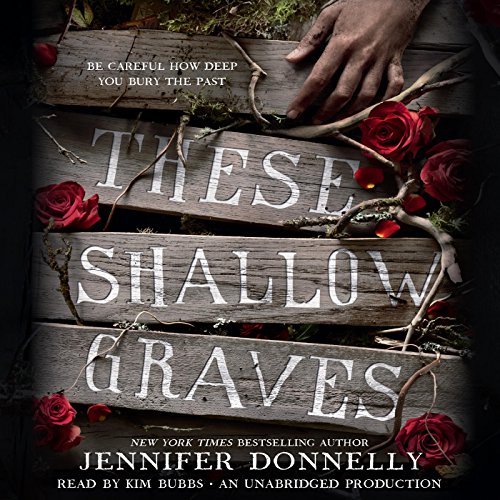 From Jennifer Donnelly, the critically acclaimed New York Times best-selling author of A Northern Light and Revolution, comes a mystery about dark secrets, dirty truths, and the lengths to which people will go for love and revenge. For fans of Elizabeth George and Libba Bray, These Shallow Graves is the story of how much a young woman is willing to risk and lose in order to find the truth.

Jo Montfort is beautiful and rich, and soon - like all the girls in her class - she'll graduate from finishing school and be married off to a wealthy bachelor. Which is the last thing she wants. Jo dreams of becoming a writer - a newspaper reporter like the trailblazing Nellie Bly.

Wild aspirations aside, Jo's life seems perfect until tragedy strikes: Her father is found dead. Charles Montfort shot himself while cleaning his pistol. One of New York City's wealthiest men, he owned a newspaper and was a partner in a massive shipping firm, and Jo knows he was far too smart to clean a loaded gun.

The more Jo hears about her father's death, the more something feels wrong. Suicide is the only logical explanation, and of course people have started talking, but Jo's father would never have resorted to that. And then she meets Eddie - a young, smart, infuriatingly handsome reporter at her father's newspaper - and it becomes all too clear how much she stands to lose if she keeps searching for the truth. But now it might be too late to stop.

The past never stays buried forever. Life is dirtier than Jo Montfort could ever have imagined, and this time the truth is the dirtiest part of all.

"Fast-paced and thrilling...a smart, insightful, timely depiction of a young woman poised on the brink of a new world after the shattering of another." ( Booklist)
"Action-packed chapters propel this compelling mystery...[and] the injustices Donnelly highlights remain all too relevant." ( Publishers Weekly)
"A beautifully written mystery." ( School Library Journal)

The Longest Book in the World

I listened to this while doing housework, so it kept my mind mildly entertained. If I were just listening to this story by itself, however, I don't think it would've been as engaging.

I found the ending predictable and easy to figure out. The &quot;mysteries&quot; were obvious from early on in the book, and the main character's shock at the reveal felt unrealistic.

Did Kim Bubbs do a good job differentiating all the characters? How?

I really didn't like the narrator. She had a very flat tone throughout the story, almost robotic (there were times where I felt like Siri was reading the story to me), and I struggled to tell the characters apart by her voice work alone. I will say this, though: she did great with accents when they were presented.

It's not an awful book, and the historical details are great. However, the mystery and romance that made up the majority of the plot didn't engage me. It felt like insta-love between the main characters, which I dislike, and the mystery was too easily solved.

Not Her Best Book

I love Jennifer Donnelly's other works theTea Rose series was phenomenal, and Revolution was good but I think since she has started writing those Disney mermaid books her writing style has been lacking it's old gusto.

The narration was terrible, the girl's voice always sounded whiny.

I hope this author will start writing for adults again.

Take a pass on this one!

It's hard to believe that "The Tea Rose Series" was written by the same writer who wrote this book.
The writing is amateurish, stilted and unrealistic.
If this is historical fiction, then fiction is the operative word. The main character, Josephine, behaves and speaks like a 21 century young woman...not one from the 1880's. As is her outlandish behavior.
There is plenty of murder and "mystery" which can be figured out very quickly. All very predictable.
I gave this only 1 star, but I'd have preferred 0 stars!!!
The narrator was just as bad as the writing. She sounded as if she was trying out for a high school play, and doing it very poorly!!!!

Not a fan of the narrator monotone, honestly I can’t get into the audiobook for that reason unfortunately I purchased it too long ago to return it or I would. The book itself it’s very good!

This is a must read!!! Jennifer is a amazing writer she really knows how to keep the story going.

I loved this book I loved the thrills and specific details that tied together. Definitely would recommend!!!

down right hoot and holler

it was better than I expected

I love this book so much, that my only complaint is that it's too short!! I wanted more, so much more, I wanted it not to be over!

It was a great and easy read! Teenagers and young adults will love it! I will have to check out her other books and hope that she has many more to come