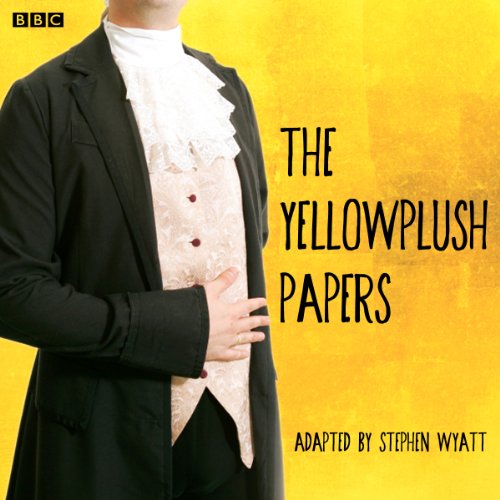 Episode 1: Charles attracts the attention of an elegant gentleman, Frederick Altamont, who is pursuing the lovely Mary. Charles does his best to matchmake, until the awful truth about Altamont comes to light. With full cast. Directed by Jessica Dromgoole.

Episode 3:Charles finds himself in Paris in attendance on a young aristocrat of very dubious morals who has fled England to escape his creditors. With full cast. Directed by Jessica Dromgoole. Episode 4: When a fashionable society novelist comes to stay at Diddlesex Towers, he inspires Charles to undertake an ambitious and scandalous enterprise. With full cast.

Meet Charles James Harrington Fitzroy Yellowplush, the perfect footman. In "The Yellowplush Papers" we follow his story from obscurity to the heights of British society in five mini-plays.

In MY FIRST EMPLOYER, Frederick Altamont takes on Yellowplush as his servant. But who is this secretive Altamont, and why does he refuse to disclose his profession?

CAPTAIN ROOK, Yellowplush's next employer, is a flattering, name-dropping rogue who dwells in the Temple and makes his way as a cardsharp. Here our hero learns all about the finer points of plucking pigeons.

Yellowplush's next employer is Algernon Percy DEUCEACE, an aristocratic ex-pat living in Paris. Deuceace is ready to marry his way into the level of life to which he'd like to become accustomed when horror strikes: his father shows up with a few home truths.

MY NOVEL finds Yellowplush in the service of the Duke and Duchess of Diddlesex and their obnoxious family. The Duke is a bit of a bore, the Duchess what we might call a late Georgian cougar. And our Yellowplush, as he frequently reminds us, has quite a fine figure, with the well-turned calves so admired in a footman.

After meeting up with dodgy society novelist Augustus Modicum during his stay at Diddlesex Towers, Yellowplush decides to write a novel of his own. The working title is "Aristocrats Behaving Badly," but after bringing it to the attention of the literary agent Scavenger, it becomes the best-selling "Besmirched Escutcheon."

Yellowplush, having wisely invested the proceeds of his just-short-of-libelous "novel," finds himself in the possession of 30,000 pounds sterling and ready for his DEBUT IN SOCIETY. It's all oak paneling, Axminster carpets, and brocade from now on! But will success change our hero for the worse?

Overall, this was a fun couple of hours. Like a kid with deep suspicions of mushrooms, just knowing he wouldn't like them despite never having tasted one, I suspected I wouldn't like Thackeray. But I liked him in adaptation. Maybe I'll tackle Vanity Fair next. Whatever the case, "The Yellowplush Papers" was great British fun, and made a holiday baking blitz merry and bright.