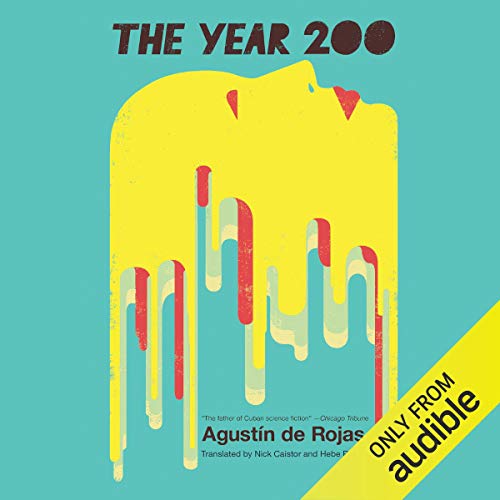 “The best and most popular novelist of this genre that the Island has ever given.”
—Yoss

“Agustín de Rojas authored a trilogy that pushes the boundaries of our imaginations.”
—SF Signal

The cult classic from the godfather of Cuban science fiction, Agustín de Rojas’ The Year 200 is both a visionary sci-fi masterwork and a bold political parable about the perils of state power.

Centuries have passed since the Communist Federation defeated the capitalist Empire, but humanity is still divided. A vast artificial-intelligence network, a psychiatric bureaucracy, and a tiny egalitarian council oversee civil affairs and quash “abnormal” attitudes such as romantic love. Disillusioned civilians renounce the new society and either forego technology to live as “primitives” or enhance their brains with cybernetic implants to become “cybos”. When the Empire returns and takes over the minds of unsuspecting citizens in a scenario that terrifyingly recalls Invasion of the Body Snatchers, the world’s fate falls into the hands of two brave women.

Drawing as much from the realms of the adventure novel, spy thriller, and political satire as from hard science fiction, horror, and fantasy, The Year 200 has been proven prophetic in its consideration of cryogenic freezing, artificial intelligence, and state surveillance, while its advanced weapons and robot assassins exist in an all-too-imaginable future. Originally published in 1990, just after the fall of the Berlin Wall and before the onset of Cuba's devastating Special Period, Agustín de Rojas’ magnum opus brings contemporary trajectories to their logical extremes and boldly asks, “What does ‘the greatest good for the greatest number’ really mean?”

Agustín de Rojas (1949-2011) is the patron saint of Cuban science fiction. A professor of the history of theater at the Escuela de Instructores de Arte in Villa Clara, he authored a canonical trilogy of novels consisting of Espiral (Spiral, 1982), for which he was awarded the David Prize; La leyenda del futuro (The Legend of the Future, 1985); and El año 200 (The Year 200, 1990), all of which are scheduled for publication in English translation by Restless Books. While he was heavily influenced by Ray Bradbury and translated Isaac Asimov into Spanish, de Rojas aligned himself mostly with the Soviet line of socialist realism defined by brothers Arkady and Boris Strugatsky and Ivan Antonovich Yefremov. After the fall of the Soviet Union, de Rojas stopped writing science fiction. He spent his final years persuaded - and persuading others - that Fidel Castro did not exist.

Nick Caistor is a British journalist, non-fiction author, and translator of Spanish and Portuguese literature.