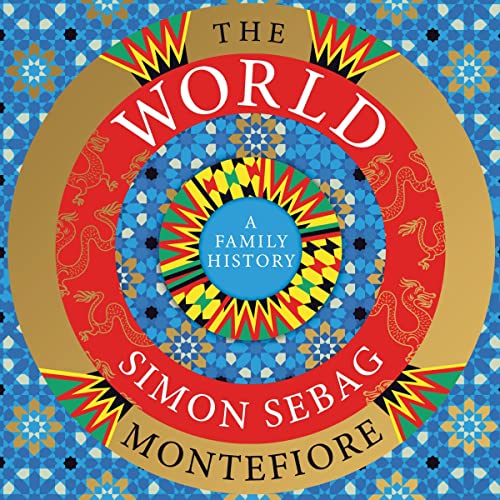 From the master storyteller and internationally bestselling author - the story of humanity from prehistory to the present day, told through the one thing all humans have in common: family.

We begin with the footsteps of a family walking along a beach 950,000 years ago. From here, Montefiore takes us on an exhilarating epic journey through the families that have shaped our world: the Caesars, Medicis and Incas, Ottomans and Mughals, Bonapartes, Habsburgs and Zulus, Rothschilds, Rockefellers and Krupps, Churchills, Kennedys, Castros, Nehrus, Pahlavis and Kenyattas, Saudis, Kims and Assads.

A rich cast of complex characters form the beating heart of the story. Some are well-known leaders, from Alexander the Great, Attila, Ivan the Terrible and Genghis Khan to Hitler, Thatcher, Obama, Putin and Zelensky. Some are creative, from Socrates, Michelangelo and Shakespeare to Newton, Mozart, Balzac, Freud, Bowie and Tim Berners-Lee.

This is world history on the most grand and intimate scale - spanning centuries, continents and cultures, and linking grand themes of war, migration, plague, religion, medicine and technology to the people at the centre of the human drama.

As spellbinding as fiction, The World captures the story of humankind in all its joy, sorrow, romance, ingenuity and cruelty in a ground-breaking, single narrative that will forever shift the boundaries of what history can achieve.

This book is incredible. It's massive, immersive, and fascinating. However, some of the narrators are infuriatingly terrible. Chronic vocal fry, shocking mispronunciations, 1950's style schlock horror delivery, reading without comprehension of the text, and many other auditory crimes. But they're all in short doses, so you only have to grit your teeth for five minutes or so until the voice changes. I'm going to get a hard copy or ebook and read it again without the distraction. It's a great book to remind you how little one knows about history, with countless rabbit-hole opportunities to learn more.

All is well except that some chapters are better to be updated, there’re certain narrators with a dry throat.
Plus the early Han chapters narrator is good but the kid can’t tell between Mandarin ZH CHI SHI vs ZI CI SI.

Following the extensive and very credible promotion, especially on the economist, this is that other disappointment. The narration is very poorly selected – no reason why we should have people with pronounced for an accent on a English text Dash, and not very understandable in many cases. The subject matter might be of interest, but it is way too extensive and all over the place. One cannot follow the train of thought, nor the individual family history. Way too much and not very coherent.