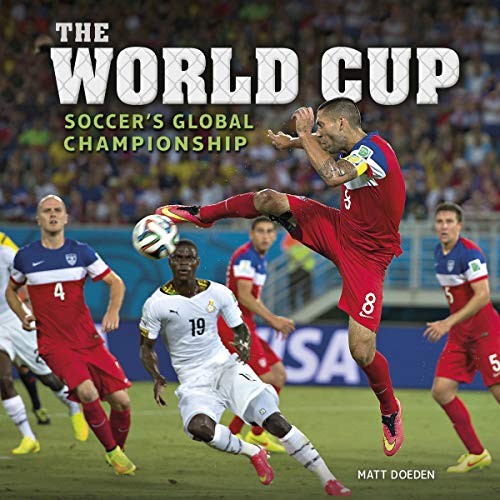 The World Cup is international soccer's championship tournament, and it rules the global sports stage. Award-winning author Matt Doeden explores the history of international soccer and covers the World Cup's greatest moments, from the Save of the Century to Diego Maradona's Hand of God goal to the United States Women's National Team's dominance. The most shocking goals, the greatest upsets, and the fun and fanfare of soccer's biggest event are all here.

Please note: The original source audio for this production includes noise/volume issues. This is the best available audio from the publisher.

"Internationally, the World Cup is the most widely viewed sports event, with a viewing audience surpassing that of the Super Bowl and the Olympics. From modest beginnings in 1930, soccer's biggest competition has soared in popularity. Doeden has scored a winning goal with this insightful look at the game's prestigious championship event. Like his earlier book The Super Bowl, this latest is well researched. He discusses the history, appeal, and format of this event, as well as some fundamentals of the game. The chapter on heroics and heartbreaks of past World Cups is quite lengthy and may not resonate well with listeners who are not dedicated fans. Men's and women's soccer are covered. In addition, he addresses in an objective manner controversial issues that have marred the reputation of the sport, most notably the 2015 scandal that rocked the governing body of international soccer. Once again, Doeden has demonstrated his sharp skills as a sportswriter. It should not be hard to entice sports fans with this title." (School Library Journal)

"The story of the World Cup, crown jewel of international soccer. Doeden's very sharp contribution to the vast world of World Cup literature deserves to be on every young soccer enthusiast's bookshelf. The book, pulsing with cracking photographs and archival images, starts at the beginning, with accounts of the first international match (attended by 4,000), between England and Scotland (which won) in 1872; the first international match outside the British Isles in 1902; and the initiation of the World Cup in 1930. Doeden writes with an easy hand, a little feverish when the action is hot, conveying plenty of information with plenty of momentum. There's lots of captivating material here: Zinedine Zidane's head-butt, Brandi Chastain's brilliant shootout goal in the 1999 final, the unreal 'barrage of goals' that ended the 1970 cup, the introduction of African teams in the 1980s, the suspected cheating in the 1982 game that allowed West Germany and Austria to advance if Austria failed to score (they failed to score) and keep Algeria out of the contest. And of course there is Pelé. Mesmerizing." (Kirkus Reviews, starred)

"This brief but informative overview, filled with black-and-white and color photographs, covers the history of the World Cup from its 1930 debut to its popularity today. It recounts the most memorable matches and moments from Men's and Women's World Cup history and spotlights some of the sport's greatest players: Brazil's Pelé, Argentina's Diego Maradona. The book doesn't shy away from mentioning pay inequality between the men and women players (leading to recent lawsuits), some of the sport's scandals, the hooliganism at certain matches, or the strange history of the sport's trophy. Soccer fans, or just casual readers, will enjoy this short but engaging supplemental resource." (Booklist)