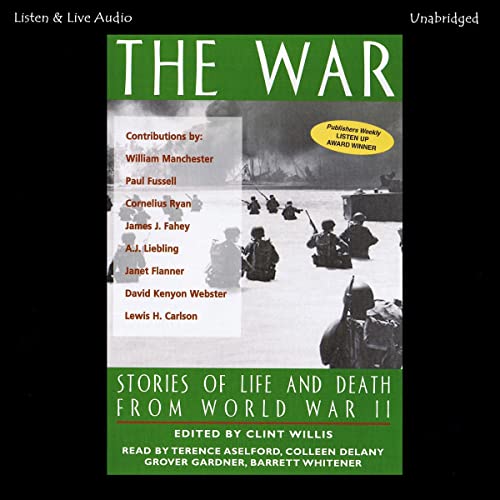 No one knew it was going to be that bad. World War II killed some 60 million people—20 million of them soldiers—and inflicted wounds, bereavement, poverty, and suffering on countless others. But such destruction was as impossible to imagine in advance as it was for young pilots-in-training to imagine their coming fiery deaths; or for Jews to foresee their last moments in the gas chambers; or for parents to imagine their children killed by the mortars and bullets and other munitions that factories churned out in such enormous quantities. As impossible, perhaps, as it is for us to imagine a disaster of similar scale in our future.

The War presents an unforgettable mosaic of memoirs from soldiers, citizens, and historians, detailing the immense tragedy that stretched from the Western Front to the Pacific Theater.

Editor Clint Willis has been a climber and an armchair mountaineer since he was 10 years old. His writing about technology, finance, and the outdoors has appeared in more than 100 publications, including Men's Journal, Outside, Rock & Ice, and The New York Times, and he is a contributing editor of Forbes ASAP and Worth magazines. He lives with his wife and two sons in Cape Elizabeth, Maine.

Barrett Whitener has been featured in a variety of instructional and entertainment programs. His recordings have received numerous awards, and he was cited as a "Voice of the Century" in Audiofile Magazine. He lives in Washington, DC.

Colleen Delany has narrated numerous best-selling audiobooks. An accomplished stage and television actress, she has appeared in Homicide: Life on the Streets, as well as on the highly successful CD Rom game Wheel of Time.

Grover Gardner has recorded more than 500 audiobooks and was named one of Audiofile Magazine's Golden Voices. He is a member of the Woolly Mammoth Theater Company, resident director at Everyman Theatre in Baltimore, and has received five Helen Hayes Award nominations for his work.