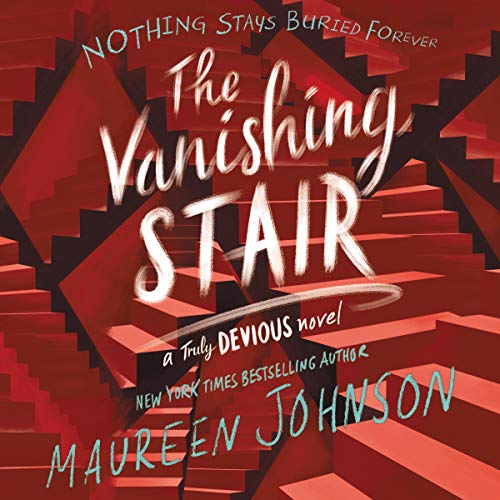 In New York Times best-selling author Maureen Johnson’s second novel in the Truly Devious series, there are more twists and turns than Stevie Bell can imagine. No answer is given freely, and someone will pay for the truth with their life.

The Truly Devious case - an unsolved kidnapping and triple murder that rocked Ellingham Academy in 1936 - has consumed Stevie for years. It’s the very reason she came to the academy. But then her classmate was murdered, and her parents quickly pull her out of school. For her safety, they say. She must move past this obsession with crime.

Stevie’s willing to do anything to get back to Ellingham, be back with her friends, and solve the Truly Devious case. Even if it means making a deal with the despicable Senator Edward King. And when Stevie finally returns, she also returns to David: the guy she kissed, and the guy who lied about his identity - Edward King’s son.

But larger issues are at play. Where did the murderer hide? What’s the meaning of the riddle Albert Ellingham left behind? And what, exactly, is at stake in the Truly Devious affair? The Ellingham case isn’t just a piece of history - it’s a live wire into the present.

“Remember the first time reading Harry Potter and knowing it was special? There’s that same sense of magic in the introduction of teen Sherlock-in-training Stevie Bell.” (USA Today, four stars)

Don’t read this one yet!

Major cliffhanger. Continuation of book 1. Equally as good or better than book 1 BUT I wish I had waited until the full series is published before listening. There is no resolution. You are given some answers but even more questions. Then the book just stops! The end almost felt mid-chapter much less mid story.

Enjoyable but no resolution

The story is good as was the first although I don’t care for the weird flat affect the narrator has chosen to depict an anxiety disorder. I just wish that there had been more movement in the story - the first was definitely better. This time there was obvious slowing down so as to get another book out of the series

How exactly am I supposed to wait for the next book? This one took us on a very wild ride and I don't want to get off! Kate Rudd is fantastic as a narrator, her performance brings the text to the next level.

For the next book - I agree with the reviewer who said not to start the series until all the books have been published.

You can skip Truly Devious since everything is repeated in The Vanishing Stair! You may be able to skip this book too. I’m betting the author tells everything again. When will this series end?

So much worse than first book

I read the first book and Immediately got second, because I loved Truly Devious. Very disappointed in this one.... The first book had a story - interesting plot - and was very dynamic. Of cause it also had elements of adolescent love story which was pretty boring, but it went with the plot nicely. Second book just drugged. There was little of the interesting story development - only last chapters delivered some progress. Mostly the second book is a boring relationships story between dusfunctional boy with good talent for abuse and gaslighting, and victim type girl, who's supposedly very smart when it comes to solving crimes, but in her own life is very gulluble and poor judge of character.
Story is not over in this book, but I'm not buying next one - so not interested in bad angree dialogs of 15 year olds between attempts to have sex.

I think I would have liked this book more if it weren’t for the narrator. Her male voices were just ridiculous and they all sounded exactly the same, like a jolly crazy person. Plus, her female character voices were all weird too, especially Janelle.
The book was fine, I liked the 1930s part much more than the present day parts. I don’t care about any of the present day characters, the author didn’t make anyone very likable.
I probably won’t be reading the next one when it comes out.

This better have a sequel!

Good book but ending is terrible. I NEED to know more! When you become invested in the characters you cannot just end on that note.

The reviews of the first book said it ended in a cliffhanger; so I bought both first and second together so I could read a complete story with a solution. However the second book ends with only a partial solution to one of the mysteries introduced in the fist book (which I figured out very early in) and NO resolution to any of the multiple other mysteries /crimes. I read series books all the time; you have to have a resolution in each book, even if an overall story arc spans multiple books. I’m done with this and will not read the next book.

Can't wait for the Next

I just listened to the first and then this book w/my 14 yo and we loved it but the cliffhanger is too much. We really need to wait to find out what happens?

UGH....anyway, enjoyed the story very much. The Narrator was good--I did get used to her after a while but think this book could have done well with an ensemble group narrating as there are a lot of characters and many of the voices sounded the same.

Really liked the book but sadly, for me it was ruined by the narrator. Before I bought the audiobook I forgot to check who the speaker was because I was so excited about the second book in the "Truly Devious" series. She narrates the book as if it was some boring textbook.
The book itself gets 5 stars from me, I can't wait for the third part! Maureen Johnson has outdone herself yet again.

The second book is even better than the first! shocking twists and interesting story arc. Nate is my favourite character, he lightens up the mood.