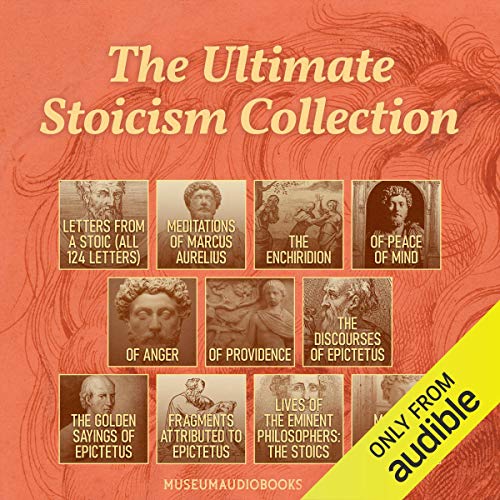 Stoicism, a school of Hellenistic thought founded in Athens in the third century BC, was one of the most sublime philosophies in the history of Western civilization. It is a way of living that focuses on reality instead of fantasy or idealism. According to its teachings, the path to peace and happiness is found in accepting the moment as it presents itself, by not allowing oneself to be ruled by the desire for pleasure or by the fear of pain.

I wish the tracks had titles to distinguish which track is which title. Having almost 600 tracks means if I want to listen to Aurelius, I play guess and check until I find it. That takes a while...

I listened to this while commuting all summer. It is vast. I thought I knew Stoicism because I had read Marcus Aurelius and a modern book or two about it, but that cannot begin to cover this rich school of thought like immersing yourself into the other surviving writings. After hearing Senneca's hundreds of letters, you get more than a sense of his philosophy - you actually start to understand his personality. I found that each of the major surviving Stoics had their own strengths and weaknesses. Anyway, I could go on and on. In short, if you are interested in Stoicism, you need primary sources. Here they are.
P.S. - Some reviewers said this was read by a computer. IT IS NOT. I do not know if these reviewers are writing about an older version, or if they are malicious, or if they just did not give this mature narrator a chance to prove to them that he was real (his style is a bit flat by some standards but you get used to it), but the main narrator and the guest narrators are living people and good to listen to.

Unbelievable that you can get all of this with one credit, I purchased how to think like an emperor just days ago, It made me interested in the stoic philosophy, so this seems to be a great start!

One of the most interesting collection of writings narrated so poorly it is intolerable. The meditations by Marcus Aurelius or letters by Seneca have a conversational tone and be fluently spoken. However is read in bunches without a sense of meaning. The words are correct but the timing is so poor that confuses the listener as to what is being said. I don’t recommend this audio book.

Audio is a bit shaky

The audio glitches in a lot of places.

The translation at times feels inauthentic, but I haven't checked other translations, so I guess this is a non-complaint.

Parts of it skip like a scratched record. Narrators often mispronounce words so it’s hard to follow the texts.

Had to return it because I couldn't get into the narration style. I already have the Meditations of Marcus Aurelius with a different narrator. I guess I'll seek out other single titles instead of this collection.

I have been enjoying and listening to this for a long time. I opened it up today to listen, and it is an entirely different narrator. It is also much shorter in length—hours shorter. So, wth.

The narrator is barely above terrible. While he has a mature voice, his delivery is about like listening to a high school student reading aloud in class. The other complaint is the production itself. There are many spots were the text noticeably skips. The reader may be reading a sentence, suddenly, the recording will jump to another sentence. Sometimes it simply interrupts the flow, other times it confuses the meaning of what was said. This collection was included “free” with my subscription so I cannot complain too much since I didn’t spend a credit for this. The actual information in the text is simply GOLD. Faults aside, I still recommend this collection of texts.