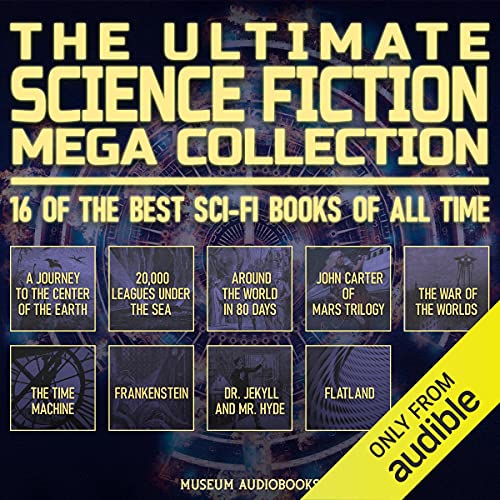 The Ultimate Science Fiction Mega Collection: 16 of the Best Sci-Fi Books of All Time

Book 2: 20,000 Leagues Under the Sea is part of Jules Verne’s most popular trilogy, along with Around the World in Eighty Days and Journey to the Center of the Earth. After chasing a “monster,” the protagonists find themselves prisoners on a futuristic submarine called the Nautilus.

Book 3: Around the World in Eighty Days (1873) is an acclaimed adventure novel by Jules Verne. It relates the adventures of Phileas Fogg and his French valet Passepartout as they attempt to circumnavigate the world in 80 days.

Book 4: Jules Verne’s masterpiece, The Mysterious Island, is a fascinating story of five men and a dog who escape the American Civil War in a hot air balloon. A storm takes them far away and they land on an unknown island. One adventure follows another as they cope with pirate attacks and active volcanoes.

Book 5: The Master of the World by Jules Verne is a story told by John Strock, a federal police inspector. Set in 1903, the narrative opens with a series of strange events taking place across the eastern seaboard of the US: frightening vehicles are seen moving at impossible speeds, and there are signs of an impending volcanic eruption in a non-volcanic mountain range.

Book 6: In the Year 2889 by Jules Verne is a diary of the observations of Fritz Napoleon Smith, the editor of an influential futuristic newspaper. It is an action-packed tale of technological advances and science fiction scenarios. Some of the predictions were remarkably accurate.

Book 7: The War of the Worlds is narrated in the first person by two brothers as the aliens criss-cross the country in their three-legged machines, destroying everything in their path with heat rays and poison gases.

Book 8: The Time Machine is about an English scientist who entertains guests for dinner every week. One day, he tells them that time is a navigable fourth dimension, displaying a little model of a time machine. At dinner the following week he entertains the guests with a remarkable tale.

Book 9: The Invisible Man is a science fiction novel by H. G. Wells. Originally serialized in a weakly magazine in 1897, it was published as a novel later the same year. The invisible man of the title is Griffin, a scientist who has invented a way of rendering a body invisible by means of changing a body's refractive index.

Book 10: The Island of Doctor Moreau is an 1896 science fiction novel by the English author H. G. Wells (1866-1946). The story is narrated by Edward Prendick, a shipwrecked man rescued by a passing boat and left on the island home of Doctor Moreau.

Book 11: This entertaining satire Flatland tells the story of the travels of A Square, a resident of the two-dimensional Flatland, where thin, straight lines are the lowliest shapes, and where the number of a man’s sides depends on his social status.

Book 12: Mary Shelley’s 1818 novel Frankenstein tells the story of Dr. Victor Frankenstein, a scientist who creates a creature by grave robbing and alchemy. Soon, he becomes horrified of what he has made. Due to this rejection by his creator, and repeated rejection by others, the monster becomes a killer, stalking all those closest to the doctor.

Book 13: The Strange Case of Dr. Jekyll and Mr Hyde is a gothic novella by Robert Louis Stevenson. It is about a London legal practitioner who investigates strange occurrences between his friend, Dr. Henry Jekyll and the evil Edward Hyde. The phrase "Jekyll and Hyde" has entered the vernacular to refer to people with a dual nature.

Book 14: A Princess of Mars is a science fantasy novel by Edgar Rice Burroughs, the first of the Barsoom series. Set on Mars, the story is full of heroic feats and interplanetary romance, against the background of a dying planet with an increasingly arid environment.

Book 15: The Gods of Mars (1918) is a science fantasy novel by Edgar Rice Burroughs ,and the second of Burroughs' Barsoom series. It features the characters of John Carter and his wife Dejah.