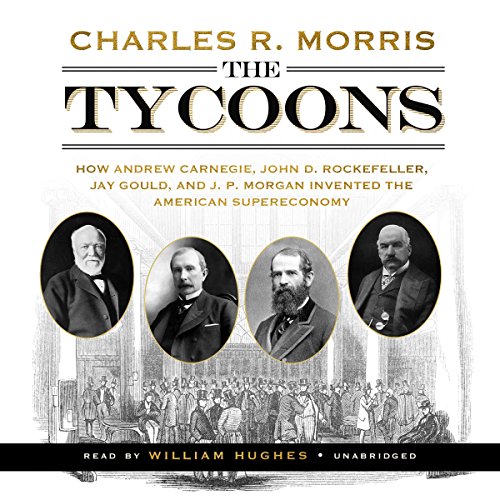 The modern American economy was the creation of four men: Andrew Carnegie, John D. Rockefeller, Jay Gould, and J. P. Morgan. They were the giants of the Gilded Age, a moment of riotous growth that established America as the richest, most inventive, and most productive country on the planet.

Acclaimed author Charles R. Morris vividly brings these men and their times to life. The ruthlessly competitive Carnegie, the imperial Rockefeller, and the provocateur Gould were obsessed with progress, experiment, and speed. They were balanced by Morgan, the gentleman businessman, who fought, instead, for a global trust in American business. Through their antagonism and verve, they built an industrial behemoth - and a country of middle-class consumers. The Tycoons tells the incredible story of how these four determined men wrenched the economy into the modern age, inventing a nation of full economic participation that could not have been imagined only a few decades earlier.

This book is more about the railroad and steel industries and the economy in general. Large sections of the book wander from topic to topic with little (if anything) to do with the four tycoons.

As for the narrative style, you'll find a handful of triple word score options for your next Scrabble game on every page. The author does his best to show his mastery of a thesaurus.

if you want a biography of the titles characters forget it, if you want an inciteful account if American rail and steel industry in the late 1800's it's good, really it needs a title that reflects it's contentt

This book is bad!

I wanted to learn about these giants of industry. This book did not do it but I finished it and was one of the worst books I ever listened to.

The title is misleading

Excellent plunge into the era of giants of capital

I have read a number of reviews that suggested this book is dry and too choked with the inner workings of large industrial firms. Well, hey, folks, it's not a Tom Clancy novel. But given the topic of how the Industrial Revolution was harnessed and used to create the dynamic American economy we still enjoy, I found the writing to be engaging and quite effective in moving the narrative along. Sure, there is detail about production numbers and how steel chemistry evolved, but the specifics did not get in the way of the great sweep of events that is described. The vignettes of the Carnegie, Rockeller, Jay Gould, and JP Morgan were fascinating and most enlightening. I learned a great deal and enjoyed the trip. Well worth the read.

This book is well performed with a very compelling story, but gets very tedious at times.

The author has woven together a fascinating mix of history & business; providing a compelling tale of several of America's first large business tycoons. The narrator holds your attention and makes it easy & comfortable to listen to the story.

Not much about the tycoons!

I wanted to know about these men and it was very minimal. Lots of interesting info on small inventors and a good view of how the industrial revolution played out but hardly anything on the tycoons. The title is deceiving.

This is a story about the economics surrounding the tycoons from mid to late 1800s. This isn’t the book to read if you are are interested in how the tycoons thought and how they became wealthy. If you want an economics lesson, this is your book.

Solid read. Seems to assume a certain knowledge base for the reader. How Morgan accumulated wealth and capital, for example, isn’t clear. For a reader seeking a detailed understanding of the characters, there is much left to be learned. Ownership structures, fees, and impacts are often overlooked when important deals are discussed. Leaves me wanting more despite the sufficient length.