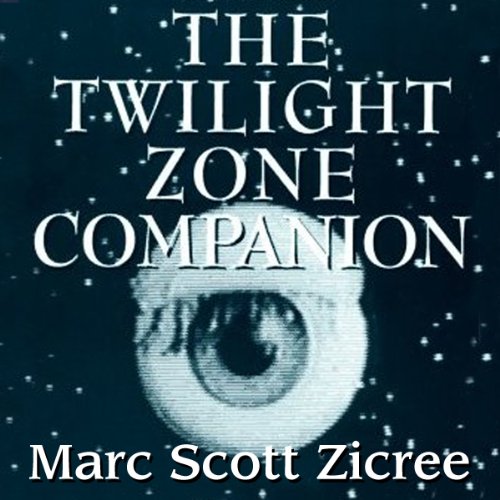 The Twilight Zone Companion is the complete show-by-show guide to one of television's greatest series. Zicree's well-written account is fascinating reading for even the casual fan. Coverage of each episode includes plot synopsis, Serling's opening narration, behind-the-scenes stories from the original artists who created the series, and a complete list of cast and credits.
©1989 Marc Scott Zicree (P)2007 Blackstone Audio, Inc.

"A book that practically reads like a short story collection." (The Washington Post)
"In all ways, an admirable and engrossing volume." (Publishers Weekly)

I got this book for Christmas when I was a kid, and have read it many times. I'm glad that I can now listen to it while working or traveling. My only quibble is with the reader, Tom Weiner. He's done a fine job on other books I've listened to, but here he has an unfortunate tendency to do a REALLY bad impression of Rod Serling's distinctive clipped vocal delivery whenever Serling's quoted. Also, I was annoyed that he mispronounces the last name of noted TZ writer Earl Hamner, Jr.'s last name (a surname I share, incidentally) as "Hammer."

Aside from these two minor annoyances, though, this is well worth the download.

Being a big fan of Serling and the original TV show, I absolutely loved listening to this title and hearing about every single episode. Just can't wait til Fourth of July weekend so that I could watch the next Twilight Zone marathon and tell everyone about all the fact I learned from the companion book.

Where does The Twilight Zone Companion, 2nd Edition rank among all the audiobooks you’ve listened to so far?

This book ranks very high among the books I have listened to so far because it covers the impressions of the writers and actors who actually worked on the show rather than some 3rd party commentator. The author covered all of the stories to include the ones that were not included in the syndication.

Like the author, I favored the stories with Burgess Meredith. He was a brilliant actor in any genre.

What does Tom Weiner bring to the story that you wouldn’t experience if you just read the book?

The accents were pretty good and his Rod Sterling impressions brought the humor that should have been there. There was also tragedy and bewilderment, well portrayed by the narrator.

I did want to listen to the entire book in one sitting. I kept going back over the parts I wanted to hear over again.

This is a reading of a compendium so listeners shouldn't expect this to listen like other nonfiction works.

A great book for a great show!

I have purchased Zicree's work on Twilight Zone many, many times. My first copy practically fell apart from reading, re-reading and constantly making notations in the margins. My second copy was loaned out and subsequently lost during college. My third copy was my constant companion while watching every episode on DVD. Now with a handicap that makes book reading difficult at best, my fourth copy is the Audible choice. That is the kindest praise I can bestow upon this book...it is one of the only books in my lifetime that I felt necessary to continually buy and re-buy since age 15. Rod Serling's creation (and each reincarnation of it) has been a big part of my life, and this book wonderfully captures the magic of those original episodes, as well as the man who made it possible.

Each Twilight Zone episode is covered in detail. You'll learn all the names, both behind and in front of the camera. The plots are given and often discussed. Serling's history is also given a great deal of attention. As a factual episode guide and history lesson, there isn't any better. But please note, it IS a fact book...despite the narrator's quality performance, one could consider it "dry", especially if you are unaware of the book's purpose. However, if you are a fan of the television show, looking for a great viewing companion, I believe you'll be satisfied. Definitely worth my Audible credit.

a blast from the past

I grew up on this show. really enjoyed it then and still do all these years later. I 1st found this book while at my favorite ride at Disney World, tower of terror. Then I found this audio version after reading book.

Have thot why I like it so much, other then that my wife does NOT want anything to do with it. I have been a sci-fi fan my whole life, along with time travel and other what if stories. But this show is great on several levels. Walking Distance has a great ending when the father says maybe you are looking in the wrong places to go home again. You need to watch that show to realize you don't have to go into the past to find a place to enjoy your self.

This book highlights many of these thots, and how they came to be. Other favorites are time enough at last, obsolete man, amazing mr. bemis, hocus pocus and frisbee, and many others.

The Twilight Zone - always a nice place to visit!

Some books just fit what the reader was looking for. This book did it for me. I think the thing that was most enjoyable was how thoroughly research the book was. The author clearly did his homework and each of the vignettes about the episodes was a treat.

A great primer a great series

This is a great primer on the excellent TV series. Zicree does go into good detail about the production of every episode and the TV show in general (including spoilers). A good book for someone who has seen the run of the series and wants more information. The guide format worked great for a anthology show like Twilight Zone but I did notice myself zooming out more than I would have a straight linear format. Stay tuned to the end of the audiobook with a rather funny interview with the great actor/TZ regular Burgess Meredith who does not suffer Zicree's dumb/non-topical questions.

"That's the signpost up ahead."

What made the experience of listening to The Twilight Zone Companion, 2nd Edition the most enjoyable?

What other book might you compare The Twilight Zone Companion, 2nd Edition to and why?

NOne that I can think up.

He could imitate accnets very well.

I felt bad when he talked about them filming Mighty Casey and the leading actor was dead.

The only issue I have is it tends to jump around from ep to ep.

What would have made The Twilight Zone Companion, 2nd Edition better?

Telling an actual story from start to finish would have been well received.

Has The Twilight Zone Companion, 2nd Edition turned you off from other books in this genre?

He read facts and no fiction.

What character would you cut from The Twilight Zone Companion, 2nd Edition?

It tells about some episodes but is not told as a story in the series.